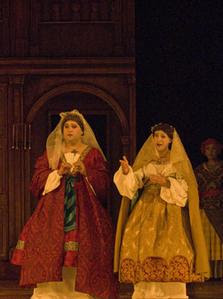 Composed to a libretto by Giulio Rospigliosi (later to be elected Pope Clement IX) for the 1631 Roman carnival season, Landi’s opera traces the [likely apocryphal, more or less] story of the Fifth-Century Roman Saint Alexis, who—according to legends prevalent in Catholic literature since the Tenth Century—was destined, as the only son of a prominent Roman Senator, for a life of privilege. Betrothed to a Roman girl of the highest rank, Alexis nonetheless fled Rome before the end of his nuptial ceremony, pledging love and fidelity to his new bride, in order to pursue a life of piety and poverty in the East. Alexis sailed for Syria and, reaching the town of Edessa on foot upon landing in Syria, lived there for seventeen years by begging. His holiness recognized and publicized by a sacristan at the Church of Our Lady, where he begged, Alexis again fled, taking passage on a ship bound for Tarsus. The ship was blown off course, however, and landed along the Italian coast. Alexis therefore returned to Rome, finding his parents still alive and his wife still faithful to him. Without revealing his identity, Alexis sought and was granted permission to live as a penitent beneath the staircase leading to his father’s house. Alexis remained there for another seventeen years, begging alms in the streets of Rome, praying in the city’s churches, and enduring harsh treatment from his father’s servants. After these seventeen years had passed, Pope Innocent I celebrated Mass in the presence of the Holy Roman Emperor, and a celestial voice was heard during the service instructing the Pope to seek out a holy man in penitence beneath the stairs of the house belonging to Alexis’ father: this holy man would pray for Rome and bring the favor of God upon Rome, the Pope, and the Emperor. Both Pope and Emperor sought the man and found Alexis in his penitent’s rags dead beneath the threshold of his father’s house, a document in his hand revealing his true identity.

This story, rich in imagery and celebration of the sanctity of suffering, provided Landi an opportunity for providing music of beauty, power, and deeply moving pathos. Composing in an idiom similar to that heard in scores by Monteverdi and Cavalli, Landi conjured a sound world that is both appropriately somber (without being sluggish or dull) in the sorrowful scenes and delightfully playful and dance-like in the ‘comic’ scenes in which the scornful servants torment Alessio. Perhaps even more than in his pioneering recording of the work for ERATO [recorded in 1995; recently re-released by Warner Classics in a clamshell box, item no. 2564 69935-6; a recording of the current production, in its fully-staged form directed by Benjamin Lazar and featuring the same cast seen in New York, has been released on DVD by Virgin/EMI], Maestro Christie proved the consummate master of this score, shaping every scene with attention to its creative instrumentation, emotional significance, and importance within the larger structure of the narrative. Conducting from the harpsichord and regal, Maestro Christie led his Les Arts Florissants players through a performance that filled the theatre with gorgeous sounds of uncompromising virtuosity and unflagging vigor.

The vocal performance began with Swiss countertenor Terry Wey, singing the role of Roma (Rome; he returned later in the performance as Religione) with lovely, rather slight tone and expert style, including the evening’s most impressive effort at the early Baroque trillo. The following scene in which Alessio’s father Eufemiano (superbly sung by bass Alain Buet) and Adrasto (sung by tenor/sometimes countertenor and would-be pop idol Ryland Angel), newly returned from the East, conversed about Alessio’s presumed whereabouts was touching as it revealed the first evidence of the family’s deep grief for Alessio’s loss, which would develop so wondrously in the scenes to come. Mr. Buet sang throughout with dignity and ingratiating tone, portraying through the coloring of his voice the anguish of a father still grieving for the loss of his son after many years. Mr. Angel held up his end of the bargain in this and his subsequent scenes and sang adequately if without true distinction.

As the menacing Demonio intent upon luring Alessio off his course of piety and penitence, bass Luigi De Donato sang with vehemence and great verve, compensating for a lower register that occasionally disappeared as it descended into the lowest notes of the role. He was splendidly abetted by the Les Arts Florissants chorus, who were joined by the children’s choir of La Maîtrise de Caen in impersonating personages celestial, infernal, and terrestrial.

One point of great interest in the performance is that it featured eight countertenors, all in important roles, approximating the conditions under which the opera might have been first performed in Rome, with the Papal ban on women taking part in stage productions within the Vatican realms. In addition to Mr. Wey, countertenors performed the roles of Alessio’s Mother (Madre) and Wife (Sposa), and their Nurse (Nutrice); his father’s servants Curtio and Martio; and the messenger (Nuntio) who soothes Alessio’s father and eventually proclaims Alessio’s death. Significantly, Alessio was also sung by a countertenor, at least in part a nod to the fact that the title role was likely first sung by Landi’s former pupil, soprano castrato Angelo Ferrotti.

Casting a countertenor as Alessio had both negative and positive effects. One of the unfortunate aspects was that, by necessity, the role must be subjected to downward transpositions, most notably in Alessio’s great questioning monologue [Act 2, scene V: ‘Alessio, che forai?'] which in Landi’s manuscript builds—atypically for the period in which it was composed—to a soprano top C. This was offset, however, by the legitimacy of having a male singer in a male role, even if the original tessitura and sanctity of the part suggest that a female singer might prove a more effective modern alternative (the role was sung, at original pitch, in Christie’s ERATO studio recording by soprano Patricia Petibon). The unquestioned success of the casting was in the extraordinary effective and vocally beguiling performance given by French countertenor Philippe Jaroussky, a rising star in Europe whose singing in New York more than justified the acclaim. Mr. Jaroussky phrased with finesse and offered an engagingly ethereal timbre that without manipulation suggested Alessio’s solemnity. Mr. Jaroussky also ventured tones higher (if not quite what Landi’s original manuscript dictates) than what one normally expects from a countertenor, producing lovely if occasionally pressed top G’s and spinning phrase after phrase that filled the theatre with beautiful sound. It was a performance that both honored the inspired nature of the music and confirmed the emergence of an important artist.

As the comic servants Curtio and Martio, countertenors Damien Guillon and José Lemos sang and acted their roles with no little charm, Mr. Guillon displaying great comic timing and Mr. Lemos bringing to his role a voice of exotic beauty far greater than it required. Their scenes were welcome respites from Alessio’s trials and his family’s grief. Pascal Bertin, a singer of warm poise and aptly grave demeanor, brought integrity to Nuncio’s pronouncements despite occasional lapses in intonation.

Alessio’s Mother and the Nurse were sung by Xavier Sabata and Les Arts Florissants veteran Jean-Paul Bonnevalle, respectively. Mr. Sabata imbued his performance as Alessio’s long-grieving Mother with great sorrow, coloring his voice with subtlety and nuance and singing throughout with touching sincerity and great tonal allure. Mr. Bonnevalle also sang well as the Nurse, maintaining a firm grasp on the phrasing and secure tone and increasing the hope that he will continue to take larger roles in Les Arts Florissants productions.

The great success of the performance, however, both vocally and dramatically, was young countertenor Max Emanuel Cencic as Alessio’s persevering Wife. More than any of his colleagues, Mr. Cencic fully justified the decision to cast male singers in female roles as Landi and his contemporaries presumably would have done by singing with tone of truly remarkable beauty and never condescending to the notion of portraying a female character. In fact, the presiding dramatic success of Mr. Cencic’s performance was that his character’s gender was secondary to the depths of sorrow expressed through song. Vocally, Mr. Cencic offered everything that countertenors’ detractors suggest that they cannot supply: absolute control across a wide dynamic range, expert coloration of the tone to explore the nuances of the text, and a prevailing sense of the voice being entirely ‘right’ for the music it sang. Both in solos and in ensembles, Mr. Cencic sang with such exquisite and melting beauty that it was impossible to fail to feel the sorrow of his character, and the tears his performance inspired among the audience were plentiful. It was a performance that equally enraptured and broke the heart and will remain forever in the memory: it was also a triumph for a rare but truly important artist.

It is always an ‘event’ when Les Arts Florissants appear in New York, and Il Sant’Alessio fully deserved this distinction. In Maestro Christie, New York found a conductor and musicologist still at the height of his powers, never bogging down music of such contemplative beauty and insight with academic posturing or idiosyncratic theorizing. With Mr. Jaroussky, New York nodded its collective approval of an increasingly valued and lauded artist. In Mr. Cencic, New York and the American musical scene, ever slow to accept even the finest countertenors, encountered one of those exquisitely priceless sources of a soul-enriching experience in which, for those few minutes, nothing in all the world mattered so much as an abandoned wife’s pain.
© by Joseph Newsome