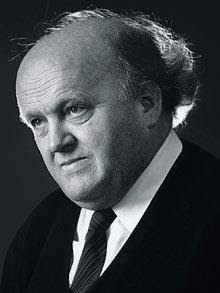 Born in 1920 in the German town of Elberfeld (now a district of the city of Wuppertal, in the western state of North Rhine-Westphalia), Horst Stein was a mechanic’s son who benefited significantly from his youth in the same city that produced Hans Knappertsbusch and Günter Wand. Attending both Frankfurt’s Musikhochschule and Köln’s famed Conservatory, Stein studied composition with Philipp Jarnach and conducting with Wand prior to returning to Wuppertal to accept an appointment as répétiteur. This led to Stein’s first appointment as the Music Director of a leading opera company, at the Hamburg State Opera in 1951.

Stein honed his skills as a Wagnerian at Bayreuth, where from 1952 he worked alongside Knappertsbusch, Clemens Krauss, Joseph Keilberth, and Herbert von Karajan. Much admired by Wolfgang Wagner, Stein would eventually conduct 138 performances at Bayreuth encompassing all of Wagner’s mature scores except Der Fliegende Holländer and Lohengrin, including the 1983 Bayreuth Centenary production of Die Meistersinger. Stein notably mastered shaping the tonal textures produced by Bayreuth’s orchestra to match the unique acoustics of the Festspielhaus and was also instrumental in facilitating Norbert Balatsch’s transition into the directorship of Bayreuth’s chorus. Wolfgang Wagner especially relied upon Stein’s reliability and firm leadership in launching his own production of Der Ring des Nibelungen during the 1970 – ’75 Festivals.

One of the greatest controversies of Stein’s Bayreuth career was his replacement for three performances during the 1976 Festival and the entire run of performances during the ’77 Festival of the legendary conductor Carlos Kleiber in Tristan und Isolde. Audiences bitterly disappointed at being denied the opportunity to hear the firebrand Kleiber conduct Wagner’s most passionate score expressed their displeasure with Stein’s less eccentric conducting, a view mostly shared by the press. Stein’s admirers praised the strength and steadiness of his leadership and suggested that Kleiber’s conducting of Tristan und Isolde during the 1975 Festival produced little of genuine interest and threatened to undermine the careful construction of Wagner’s score.

Stein’s Bayreuth appearances were supplemented by an especially fruitful career with the Wiener Staatsoper, where he conducted more than 500 performances. Among Stein’s most famous assignments at the Staatsoper was the much-acclaimed production of Verdi’s Don Carlo starring Franco Corelli, Gundula Janowitz, Eberhard Wächter, Shirley Verrett, Nicolai Ghiaurov, and Martti Talvela.

On records, Stein proved an apt and celebrated interpreter of the orchestral works of Max Reger, the often deceptive symphonies of Anton Bruckner, and the piano concerti of Beethoven. My own personal favorites among Stein’s discography are a studio recording for the German branch of EMI of Bizet’s Carmen, sung in German, with Christa Ludwig, Rudolf Schock, and Hermann Prey, in which Stein summons a surprising degree of Gallic charm and renders an appropriate, superbly-sung Carmen with what is essentially a Lohengrin cast; and a 1970 performance of Tristan und Isolde, recorded ‘live’ from the stage of the Wiener Staatsoper, with Ingrid Bjöner and Hans Beirer as the lovers, Ruth Hesse as Brangäne, Walter Kreppel as Marke, and Otto Wiener as Kurwenal, a performance that impresses because of its shapeliness and restraint, allowing the moments of great passion to explode from the surrounding music.

Stein is largely remembered as one of the last members of the expiring breed of the German Kapellmeister, a term that has unfortunately taken on negative connotations. Stein exemplified the best qualities of the Kapellmeister tradition: thorough education, deep knowledge of the repertory, easy rapport with players and singers alike, complete commitment, and an inherent ability to allow the music before him to take shape as the composer intended without imposition of personal idiosyncrasies or egotistical distortions. Stein’s deep-rooted professionalism is a quality that would be tremendously useful in any of the world’s great opera houses today.
© by Joseph Newsome