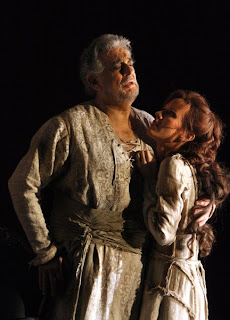 Those of you who will read this should know from the start that, in general, my heart beats most fondly for the Baroque. Perhaps mine is one of those that are sometimes called ‘old souls,’ or perhaps I merely long for the inherent simplicity and continuity of an order in which our lives play out in recitative, speeding to a climax and then pausing to allow us to sort out our emotions in arias that reflect our innermost reactions to our circumstances. I thrill to the war cries of Manrico, weep with Wotan as he bids Brünnhilde farewell, sigh with Lucia as she recalls meeting her lover by the fountain, share Mélisande’s agitation when her ring has gone down the well; but cardboard Baroque characters intrigue and engage me most meaningfully because, in the finest cases, their music aspires to sublimity.

Any production of a Händel score by a major opera company (presumably with resources to do the piece justice) is therefore cause for celebration. When it was official that Plácido Domingo would follow his ‘star turn’ as Bajazet in Händel’s Tamerlano at Teatro Real in Madrid (where he shared the role with American tenor Bruce Ford) by bringing his performance to a new production at one of his home bases, Washington National Opera, my enthusiasm was limitless. It decidedly was not, then, a lack of enthusiasm that impeded my enjoyment of the 2 May performance of Tamerlano.

Musically, the performance ranged from the basically acceptable to the superb. The reduced orchestra of Washington National Opera did their considerable best but could not disguise the fact that, the presence of several Mozart scores in their repertory notwithstanding, this was decidedly foreign territory for them. Still, the woodwinds made an especially fine showing, with excellent work from the bassoon and clarinets (Tamerlano having been among the first operatic scores, and perhaps the most important of its period, to make use of the latter, then-new instrument). There were moments of untidiness among the strings, not least in the exposed fugal passages of the overture. The orchestra as a whole would doubtlessly benefit from interaction with a few ‘period’ players, particularly in tightening their collective attacks on Händel’s finely-honed rhythms.

For ‘period’ continuo, Washington National Opera fielded pairs of harpsichords and theorbos. These instruments and their respective players contributed effectively to secco recitatives but tended to get somewhat lost in all but the slow, ‘pathetic airs’ (with which, admittedly, Tamerlano abounds). There were questions of balance throughout the rehearsal period, and some credit is due for partially solving the problems of translating ‘period’ sounds into tones that remain mellifluous and ostensibly ‘authentic’ while also filling the requirements, in terms of amplitude, of a modern house considerably larger than that for which the opera was composed. Performing at modern (a = 440 mHz) rather than ‘period’ (a = 415 mHz, in most cases) pitch helped in this regard, brightening the sound and facilitating greater projection into the large auditorium.

Maestro William Lacey conducted capably but at times sluggishly. Lyricism went better than vehemence, and rhythms were sometimes slack in the fiercely-sprung ritornelli. Maestro Lacey generally shaped secco recitatives effectively, rarely losing momentum. One way in which Lacey was remarkably successful was in highlighting the string figures in aria accompaniments throughout Tamerlano, making it more than usually apparent that, though nearly sixty years would pass between them, Idomeneo was very near on the horizon.

Vocally, the center of the evening was Irish mezzo-soprano Patricia Bardon, singing the role of the hapless Greek prince Andronico, about whose tribulations in love and politics the plot gyrates (far more so than about the title tyrant). From first note to last, recitative and aria, Bardon missed nothing, musical or dramatic. The Werther-esque brooding imposed upon the character by the production grew wearying, but the commitment of Bardon’s acting and the velvety beauty of her singing convinced that perseverance would be rewarded: ultimately, it should have been very difficult to remain indifferent to Andronico’s plight as conveyed by Bardon’s performance. This made all the more unfortunate several instances in which, thanks to badly-timed and frankly stupid colloquial translations in the projected supertitles, Andronico’s lamenting words drew waves of laughter from the audience.

Asteria, the object of Andronico’s affection (and Tamerlano’s lust), was sung by soprano Sarah Coburn, in one of her most high-profile assignments with a major American company to date, building upon her success at the Metropolitan Opera in Tan Dun’s The First Emperor. The investment WNO made in this young artist paid considerable dividends, with Coburn delivering a superb performance of Asteria’s great aria ‘Cor di padre,’ one of Händel’s greatest inspirations for Francesca Cuzzoni (and employed here—wisely, I think—as in Händel’s first draft of the score to end the second act). Throughout, Coburn sang with poise and burnished tone, combining with Bardon for a ravishing account of their final-act duet ‘Vivo in te mio caro bene.’

Young British bass-baritone Andrew Foster-Williams made much of little as Leone, taking advantage of his interpolated aria to offer high-octane singing. Elsewhere, with his contributions confined to recitative and the bass line in the closing rhetorical coro (essentially a quartet for the surviving principals), Foster-Williams’ dedicated performance could do little to disguise the fact that Leone is essentially an uninteresting hanger-on. Nonetheless, the voice was absolutely first-rate, and Foster-Williams’ performance proved especially memorable.

More significant dramatically is Irene, Tamerlano’s rightful betrothed, sung by mezzo-soprano Claudia Huckle, a two-season veteran of the Domingo-Cafritz program for emerging artists. Huckle’s Irene was very much in the picture dramatically, looking stunning in the Prada-style costume in which she made her first entrance. Vocally, Huckle’s performance was more variable: moments of fluency alternated with struggles with the coloratura of her arias. In essence, Huckle’s seemed to be a voice of genuine quality being put to the test of a role for which it is not ideally suited.

The prevailing question concerning Plácido Domingo’s assumption of Bajazet is surely, Why? Why, at the age of sixty-seven, after having sung 125 roles in the world’s major houses, take on a role as challenging and vocally different from his latter-day repertory of Parsifal and Siegmund? There is no other obvious answer than that Domingo does this because he can: the resources are at his command, and there remains the house-filling audience willing to accompany him on this adventure. It was just that: an adventure. Any Baroque purist hoping to hear the sort of Bajazet one remembers from Alexander Young or expects from Mark Padmore was ultimately disappointed but hopefully not incapable of enjoying what was in many ways a very fine performance. Domingo flubbed his first aria but recovered with aplomb and thereafter gave a performance of integrity. Domingo made his approach to the coloratura work, and several of his attempts at trills were surprisingly successful (as, to be fair, were his youthful efforts at trilling in Don Carlo, Il Trovatore, and the Verdi Requiem). Bajazet’s duet with his daughter Asteria was another stand-out moment in the performance. In other commentaries, Domingo’s performance of Bajazet’s famed death scene (following his off-stage act of suicide) has been likened to Verdi’s final scene for Otello, for which Domingo was long celebrated: it is a viable comparison, but Domingo’s moving performance of Bajazet’s death brought his staunchly dignified Samson more to my mind. One is prepared to forgive Domingo much for his bravery in singing this role at this juncture in his career, but in the event very little forgiveness was required to enjoy the strength, beauty, and abandon of his performance.

Singing the ubiquitous title role was American countertenor David Daniels, arguably the finest and most famous countertenor presently before the public. In general, Daniels is a very successful interpreter of Händel’s alto castrato roles, which he has sung in houses large and small throughout the world to near-universal acclaim. Tamerlano, unfortunately, is not an ideal role for Daniels, not least in that the music for the spoiled, petulant Emperor never allows an opportunity for Daniels to provide the lyricism he is capable of bringing off with such striking and, among countertenors, atypical beauty. Händel’s Tamerlano is one-dimensional, and Daniels’ performance could not overcome this. Daniels may well prove more effective in the role in a smaller house, where the temptation to force to ensure suitable volume would be lessened. All told, however, Daniels’ performance was thoroughly capable and, of course, expertly sung but did not offer him the opportunity to transport the audience with his finest qualities.

Only the slightest mention of the silly, modern-dress (with Asteria and Bajazet is some sort of unspecific, pseudo Ottoman costumes that seemed discarded from a provincial production of Die Entführung aus dem Serail) production by Chas Raider-Shieber is required. The production did nothing to provide settings of time and place to elucidate the characters’ actions and motives. One does not expect a production of Tamerlano to convincingly recreate ancient Samarkand, but would-be-chic (or is that would-be-sheik?) vagaries do not suffice. The production undermined the emotional significance of characters and consequently one’s concern for them. Unfortunately, even a deep personal affection for a score cannot redeem a production that does not seem to understand or respect it. What Washington National Opera understood is that Tamerlano requires singers with intelligence, fluid technique, and beautiful voices, and in this respect the production exceeded expectations.
© by Joseph Newsome