ARTS IN ACTION: Baritone BRIAN MULLIGAN and Vocal Arts DC bring the world première of Gregory Spears’s Walden, alongside Dominick Argento’s From the Diary of Virginia Woolf, to Washington’s Kennedy Center on 16 September 2018 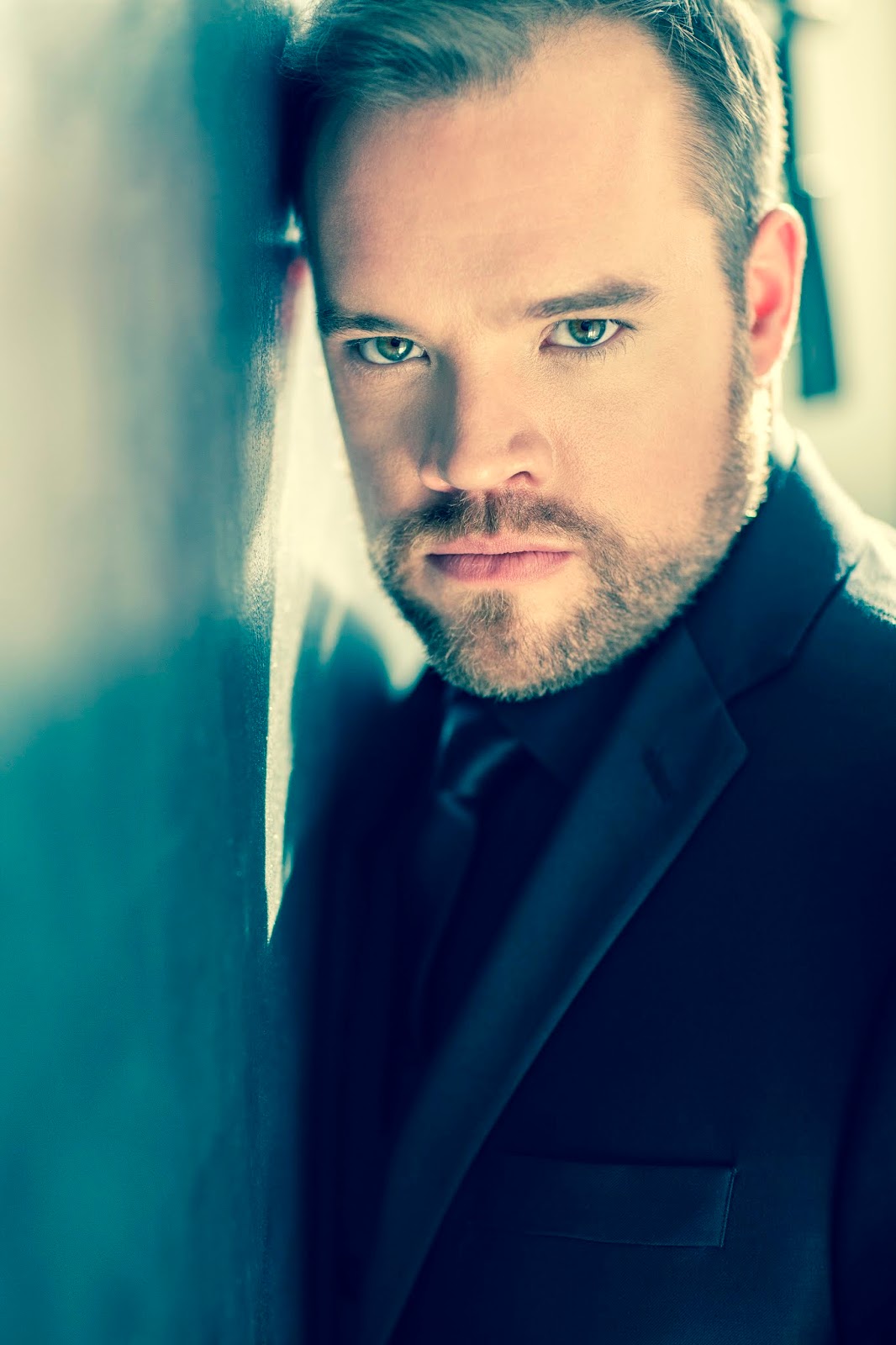 ‘Music, once admitted to the soul,’ the Victorian author and politician Edward Bulwer-Lytton wrote, ‘becomes a sort of spirit, and never dies.’ In the realm of Art Song, ‘the Soul selects her own Society,’ as Emily Dickinson opined, each listener’s individual experiences, personality, and preferences dictating the constitution of that musical soul. Whether a listener’s foremost loves are German Lieder, French chansons, Italian canzonette, or Art Songs in English, there is an universal sense of euphoria sparked by hearing great music for the first time—the euphoria that transforms sounds into the eternal spirit of which Bulwer-Lytton wrote. On Sunday, 16 September 2018, dynamic baritone Brian Mulligan joins pianist Timothy Long in a Vocal Arts DC recital in Kennedy Center’s Terrace Theater that both introduces new music and enables listeners in the nation’s capital to revisit a lauded work of America’s recent musical past. Thankfully, Art Song recitals remain plentiful, even beyond America’s metropolises, but opportunities to witness the début of new music by artists of uncompromising integrity are infrequent events. With this Kennedy Center recital, Vocal Arts DC patrons have the chance to join the ranks of musical pioneers like those who first heard Schubert’s Winterreise, Schumann’s Dichterliebe, and Wagner’s Wesendonck Lieder.

A native of New York’s Triple Cities region, Mulligan possesses a voice that flows with the power and beauty of the Susquehanna. An alumnus of both Yale University and the Juilliard School, the baritone has established himself as a master of an extraordinarily broad repertoire, his engagements at the Metropolitan Opera including rôles in Rossini’s Il barbiere di Siviglia, Gounod’s Faust, Saint-Saëns’s Samson et Dalila, Verdi’s Simon Boccanegra, and Richard Strauss’s Die Frau ohne Schatten. In this Vocal Arts DC recital, he further expands his acquaintance with contemporary music with the world-première performance of Gregory Spears’s Walden, a setting of texts by Henry David Thoreau. In a recent conversation, Mulligan disclosed that a telling sense of responsibility guides his preparations for the first performance of Walden. ‘Being a part of a world première helps remind me that all of my artistic interpretations can be unique and meaningful, even if the music I usually perform is over 100 years old,’ he confided. ‘The greatest reward of singing a world première is the feeling of being a true creator. As a singer, it’s sometimes a challenge to remember that you are a creator, not just an instrument.’

First published in 1854, Henry David Thoreau’s Walden; or, Life in the Woods is a pillar of the American literary canon, its endorsement of quintessential Yankee virtues and the basic tenets of Emersonian transcendental philosophy lending Thoreau’s words an aura of prophecy that seems ever more visionary in the modern era. More reactionary than truly radical, the writer’s ideas are presented without artifice, yet, unlike the symbolism-laden novels of Ernest Hemingway, Walden cannot honestly be said to be a ‘good read’ on a superficial level. The irregular meters and syntactical idiosyncrasies of Thoreau’s writing do not facilitate musical adaptation, but the humanistic message imparted by the author’s words finds an expert conduit in Spears, whose critically-acclaimed opera Fellow Travelers, premièred by Cincinnati Opera in June 2016, similarly asks audiences to confront uncomfortable political, societal, and spiritual prejudices. Mulligan’s reflections on his involvement in furthering Walden’s genesis divulges the organic proficiency of Spears’s handling of Thoreau’s words. ‘The greatest challenge in any world première is handling the revisions that inevitably come up in rehearsals,’ the baritone states. ‘It’s part of the process of creating a new piece of music, but it can get very confusing for a singer to remember all of the revisions!’ In this music, however, writer, composer, and interpreter have achieved symbiosis with minimal alternations. ‘Happily,’ Mulligan says, ‘there were very few changes made to Walden—thank you, Greg!’

Walden is partnered in its first performance with music by American composer Dominick Argento. When circumstances delegated the inaugural performance of music commissioned for a 1975 recital sponsored by Minneapolis’s Schubert Club first to one American soprano, then to a very different American soprano, and finally to widely-acclaimed British mezzo-soprano Dame Janet Baker, the changes in personnel led Argento on a search for material suited to each successive recitalist’s particular gifts. With the aim of engaging Baker’s interpretive savvy, the composer ultimately chose as his texts selections from A Writer’s Diary, a 1953 compendium of excerpts from the diaries of Virginia Woolf. The song cycle created for and premièred by Baker in Minneapolis on 5 January 1975, From the Diary of Virginia Woolf, garnered the 1975 Pulitzer Prize for Music for Argento, rightly rewarding the psychological depth and emotional immediacy of his settings of Woolf’s candid words.

Manifested in a wonderful 2016 Naxos recording, Mulligan’s advocacy of From the Diary of Virginia Woolf has offered fresh interpretations of this vibrant music to Twenty-First-Century audiences. Now, he brings to Kennedy Center a singular perspective on the parallels and intersections among Thoreau, Woolf, Spears, and Argento. Contemplating the similarities between the pieces that he will sing in Washington, Mulligan identifies a common nationalism in the cores of both From the Diary of Virginia Woolf and Walden. ‘Dominick and Greg both compose music that, to me, sounds uniquely, proudly, beautifully American,’ he suggests. ‘The texts of these two cycles are both deeply emotional introspections, but they are each expressed very differently. Woolf’s diary is devastating, sometimes manic, and Argento wrote music that is a visceral expression of her text.’ This, he explains, establishes an emotive contrast between the works. ‘Thoreau’s words in Walden are calm and collected, and Spears’s music is a quiet, cerebral expression of his text—to me, anyway!’ Committed to safeguarding listeners’ right to form their own conclusions, he quickly adds, ‘That’s just how I experience this music, but [they] may experience it differently. I do think the two cycles complement each other, musically and thematically. They are both gorgeous contemplations.’

The abiding difference between Walden and From the Diary of Virginia Woolf might be best characterized as one of basic attitudes towards the tribulations of human existence. Mulligan is keenly sensitive to this polarity. ‘While Thoreau’s Walden is full of hope and wonder, Woolf’s diary is mostly wrought with an inescapable despair,’ he contends. ‘Thoreau once wrote that he had “a real genius for staying at home,” and I think Woolf shared that clever sentiment. Woolf was born twenty years after Thoreau’s death, and she was a great admirer of him and his work. In July 1917, The Times Literary Supplement published Woolf’s essay “Thoreau,” and it is a beautiful tribute to him. [Click here to read an edited version of Woolf’s ‘Thoreau’ on the TLS website.] They were very different people, but I think they both relied on solitude in order to clearly observe both society and themselves.’

More than a century and a half after Thoreau’s death and nearly eighty years after Woolf ended her life, Mulligan recognizes the paradox of withdrawing from society in order to better understand it that they exemplified as a vital component of the analytical acuity wielded by Thoreau and Woolf. ‘One of the things I like best about Thoreau and Woolf is that they were both so brilliantly introspective,’ he asserts. ‘They were both so conscious and present, always aware of what was going on around them. The way that they processed their life experiences into their art is incredibly inspiring to me—and something I strive to do in all of my performances.’ Retreating inward in order to sharpen one’s outward perspicacity is an action that is very familiar to the singer. ‘That solitude, or aloneness, helped to unburden their minds and distill their thoughts,’ he says of Thoreau and Woolf. ‘It’s a practice I regularly turn to as an artist when I’m learning new music or creating a complex character.’

When asked to which aspects of Spears’s and Argento’s music he would entreat the Kennedy Center audience to be especially attentive, Mulligan exclaims, ‘I don’t believe in asking audiences to prepare to be entertained! At the recital, sit back, experience the performance, listen to the words, hear the music, and allow yourself to feel something. After the performance, if you want to learn more, go to my website. Listen to the music again, reexamine these texts, and discover more about the creators who brought this all together. [Among] Argento, Spears, Thoreau, and Woolf, there’s just so much art and history to enjoy.

Listeners are certain to feel something when hearing Brian Mulligan sing. The energy of his singing is felt by the body, and the sincerity of his emoting is felt by the soul. He does not demand that audiences agree with his artistic choices, but he makes them with the expectation of being heard with the same openness and concentration with which he performs. In this, his work recalls the crafts of both Henry David Thoreau and Virginia Woolf. In her final novel, Between the Acts, Woolf wrote, ‘Music wakes us. Music makes us see the hidden, join the broken.’ Giving first life to Gregory Spears’s Walden and new life to Dominick Argento’s From the Diary of Virginia Woolf, Mulligan’s Vocal Arts DC recital promises to awaken, reveal, and restore. 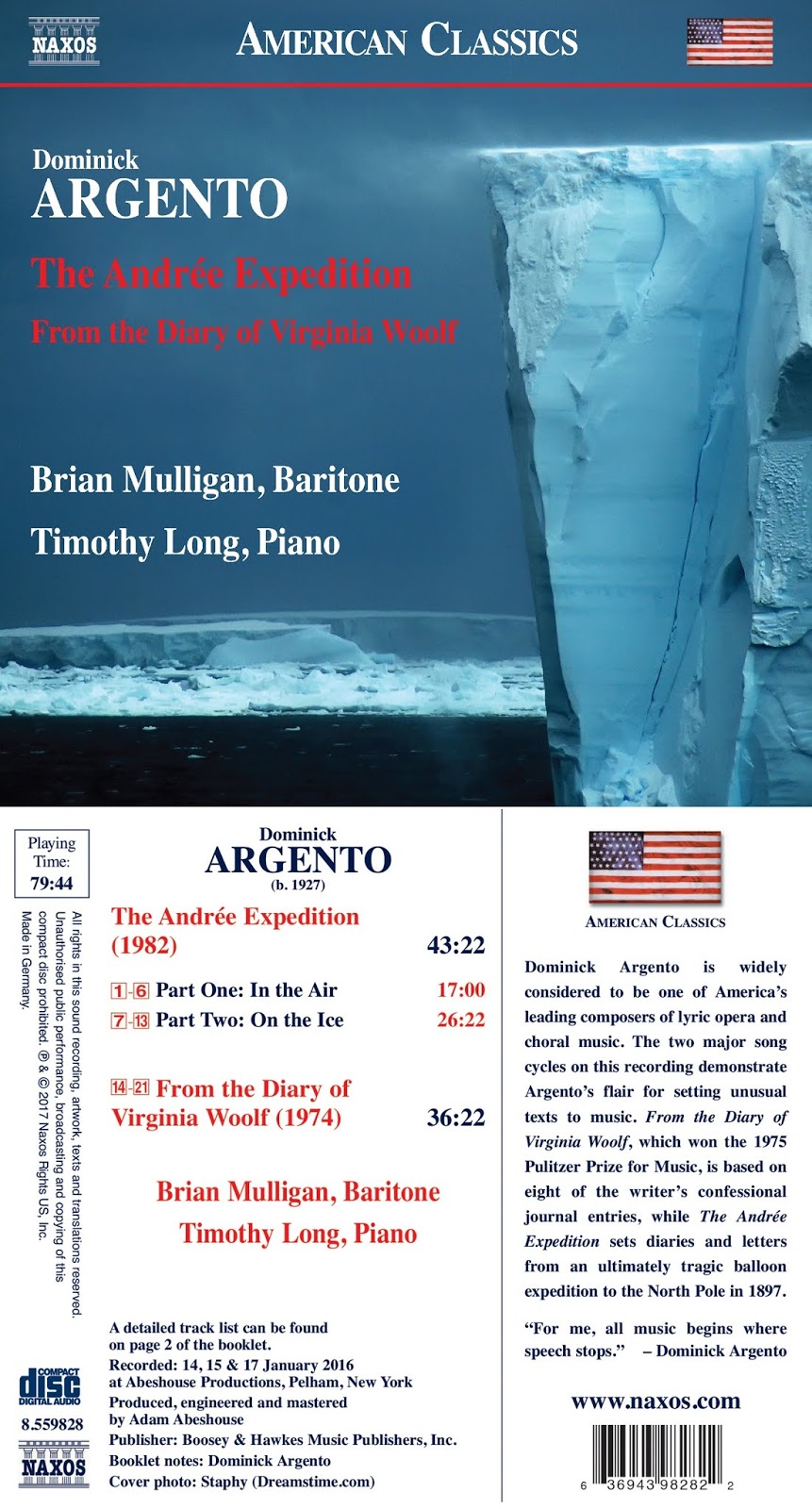 Brian Mulligan’s and Timothy Long’s Naxos recording of Dominick Argento’s The Andrée Expedition and From the Diary of Virginia Woolf
Naxos 8.559828
Available from Naxos Direct, Amazon, and major music retailers