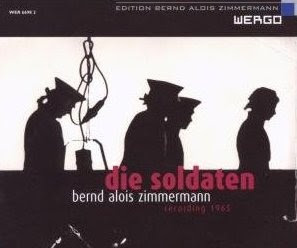 From the perspective of this writer, the first thing to be written is that this is not the sort of opera by which I expect to be taken in. Modernity and atonality are not traits that attract me to a score and entice me to listen. Admittedly, I have recently been on an atypical journey through contemporary theatrical scores—Daron Aric Hagen’s Bandanna (scored for voices with wind ensemble and Mariachi band!), Francesco d’Avalos’ Maria di Venosa, and Laurent Petitgirard’s fascinating Joseph Merrick, The Elephant Man. These scores are considerably more accessible to a listener firmly grounded in tonality, however, than a preliminary examination of the accompanying materials (which outline Zimmermann’s twelve-tone structures in great detail, with superb facsimiles of both the autograph and printed scores) and a slight familiarity with Zimmermann’s music would suggest Die Soldaten to be.

Whose surprise could have been greater than mine, then, when upon listening for the first time to WERGO’s 1965 recording of Zimmermann’s tremendously difficult score, made only days after the first performance of the complete opera at Cologne, I not only appreciated but actually enjoyed the performance? The first positive attribute of the opera is its libretto, drawn from an eighteenth-century ‘homonymous drama’ by Jakob Michael Reinhold Lenz which also inspired an opera from Zimmermann’s contemporary Manfred Gurlitt. In the same vein as Büchner’s (and, eventually, Berg’s) Wozzeck, Lenz’s drama has as its subject the inherent inhumanity of military life and conflict (which, as in Wozzeck, does not necessarily involve the battlefield). Gurlitt produced a score that owes much to Schoenberg, Webern, and their Viennese school of ‘modernism.’ What Zimmermann created was a considerably further-reaching score, neither more nor less ‘modern’ in the strictest musical sense, involving complex twelve-tone motives, myriad sound effects, integration of recorded music, and vocal styles ranging from the angular patterns familiar to English-speaking listeners from the later works of Tippett to melodic arcs similar to Italian bel canto.

In fact, it is the varied and startling beauty of the singing in this performance that compels attention and ultimately inspires affection for Zimmermann’s score. For Marie, his heroine of sorts, Zimmermann envisioned an atonal Königin der Nacht, spiky coloratura taking her to dizzy heights in the second act. Initially skeptical of the casting of Edith Gabry in the role, not least because of her fortuitous position as the wife of Cologne’s General Music Director István Kertész, Zimmermann succumbed to the allure of Gabry’s absolute commitment to the score and the lovely timbre (honed in more traditional repertory) she brought to her task, eventually adapting portions of the score to accommodate a moderately lowered tessitura for Gabry’s benefit. The results are often sublime, producing vocal lines of eloquence that resemble those of Strauss’ Aminta (Die Schweigsame Frau), Kaiserin (Die Frau ohne Schatten), and Zerbinetta (Ariadne auf Naxos). Gabry sings magnificently, bringing a bright tone to music of often fearsome difficulty and negotiating extraordinarily challenging intervals with poise and the appearance of ease. Were one to encounter a performance of this caliber in traditional repertory in any of the world’s great opera houses today, a star would be born instantaneously; deservedly so.

Equally impressive is Anton de Ridder, remembered as a specialist in Italian roles in German-speaking theatres during the third quarter of the twentieth century. Singing his difficult role in Die Soldaten with the same grace and pointed tone with which he might have approached Donizetti’s Edgardo or Verdi’s Alfredo, de Ridder sings wonderfully, striking sparks with Gabry in their scenes together and creating a memorable character who both attracts and repulses.

Also making strong impressions are Zoltán Keleman and Gerd Nienstedt, who bring to Zimmermann’s dark score the same fearlessness, intelligence, and vocal acuity familiar from their Bayreuth performances. Due special mention is tenor Albert Weikenmeier, sounding audibly aged but facing without fear or compromise (or, ultimately, failure) the punishingly high tessitura of his role.

Supervising from the pit is Michael Gielen, that champion of twentieth-century music who—with, among other ensembles, the Cincinnati Symphony, of which he served as Music Director in the 1980’s—also mastered the tricky symphonies of Beethoven, Bruckner, and Mahler. Gielen conducts from the first with a discernible sense of being at the helm of the maiden voyage of a contemporary masterpiece, but he completely avoids the common pitfall of treating the score as a monument carved in stone. Gielen seems to phrase the score’s jagged musical paragraphs in step with the players of the superb Gürzenich Orchestra and breathes with his singers, creating a rapport between stage and pit that is all the more astonishing considering that the score also demands coordination with pre-recorded montages. Gielen serves the composer, who supervised both the Cologne production and this recording, with irreproachable honor: higher praise is not possible.

A formidably difficult piece to stage with its requirements of split scenes, film projections, and careful arrangement and deployment of loudspeakers throughout the house, Die Soldaten at first glance seems a score that would best be both seen and heard. This recording, captured in monaural sound that not only belies its age but serves as a model of its kind with which one imagines that Walter Legge would have been well pleased, proves that the opera can be equally effective as an audio-only experience. The people one meets in this opera are almost uniformly unpleasant, with even the ‘good’ characters having undercurrents of suspect morality and insecurity, but the challenging beauty of Zimmermann’s music convinced this listener that this is an inescapable component of humanity and, if one turns one’s perspectives on their heards, there is great poetry to be found in it.
© by Joseph Newsome