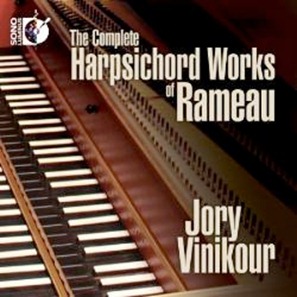 Less is known about the life, musical and personal, of Jean-Philippe Rameau than about almost any other composer of the Baroque period: even the life of Johann Sebastian Bach is more fully documented than that of Rameau, whose formative years were an enigma to his own wife.  Listening to this recording of Rameau’s music for harpsichord performed by Paris-based harpsichordist Jory Vinikour brings to mind Maria Callas’s famous comment that one need only listen to the final act from her 1959 recording of Ponchielli’s Gioconda in order to get at the heart of her artistry.  More than 250 years after the death of a composer, there is no more apt means of getting to know him than to make the acquaintance of his music, and listening to the energetic, eloquent playing of Jory Vinikour on these discs provides countless insights into the artistry of Jean-Philippe Rameau.

A critical element of the success of this recording is the fact that Mr. Vinikour had at his disposal a magnificent instrument, a 2005 reproduction of a 1707 French double-manual harpsichord by Nicolas Dumont.  Built by Virginia-based craftsmen Thomas and Barbara Wolf, the instrument was loaned for this recording by the Clarice Smith Performing Arts Center at the University of Maryland at College Park.  Remarkably, the original instrument after which the harpsichord used in this recording was modeled—which survived the French Revolution by going into hiding—is presently in a private collection in Delaware.  Tuned to a 7th-comma homogenous French temperament with a = 392 Hz (considerably lower than modern concert pitch, with a = 440 – 443 Hz, and lower than perceived 18th Century pitches in Italy and Germany, where Bach’s organs were tuned to a = 480 Hz), the instrument produces a strikingly warm tone combined with uncommon evenness throughout the five-octave range.  This instrument completely avoids the tinny sound of many of the harpsichords that can be heard on recordings made in the early years of the Baroque performance practice revival, and the glowing timbre and versatility of this instrument offer a near-ideal playground for Mr. Vinikour’s considerable talents.

Aside from Bach’s solo partitas for violin and ’cello, Baroque music for solo instruments does not inspire thoughts of deeper emotions, and indeed many solo pieces composed by Continental composers during the 17th and 18th Centuries were primarily intended to display the virtuosity of the players for whom they were created (or of the composers themselves).  An astonishing aspect of Mr. Vinikour’s artistry is the manner in which he blends unparalleled technical command of the harpsichord to the expressivity that one might expect in a pianist navigating the Piano Sonatas of Beethoven, qualities that are apparent in every track on these discs.  From an interpretive perspective, there are certain technical limitations inherent in any harpsichord, of course: the basic mechanism of tone production that prevents the sustaining of notes (hence the prevalence of trills in Baroque keyboard music), challenges with the clarity of articulation in rapid passages except in the best instruments, and control of dynamic contrasts that is far more complicated than with a modern piano.  Granted an instrument that minimizes these limitations, Mr. Vinikour capitalizes on this opportunity, bringing great expressivity to his playing.  What is quickly revealed is that, rather than applying emotional contexts to the music externally, Mr. Vinikour finds in each piece its own individual colors and allows them to glow through his playing.

This is not to suggest that Rameau’s music for harpsichord is not technically demanding.  There are in all of the Suites in this collection, as well as the late ‘La Dauphine,’ passages requiring uncompromised virtuosity, and Mr. Vinikour delivers performances that belie the difficulties of the music before him.  ‘La Dauphine,’ perhaps the last keyboard piece composed by Rameau and ironically the only harpsichord piece that has survived in manuscript in Rameau’s own hand despite likely being a transcription of an improvisation, presents unusual challenges, perhaps because of its improvisational provenance: stylistically wayward, the formal unity typical of Baroque keyboard music is discarded, rendering the piece a rhapsodic tour de force that receives from Mr. Vinikour a thrilling performance.  Equally impressive is Mr. Vinikour’s playing of the delightfully programmatic pieces in the Suite in G, ranging from demisemiquavers depicting the clucking and pecking of hens (‘La Poule’) to rippling mordants indicative of the rustling of a gypsy girl’s skirt (‘L’Égyptienne’).  Rameau the theorist incorrectly surmised that the illusion of a third playing hand in the technique required in ‘Les Trois Mains’ from the a-minor Suite was his own invention, as contemporaneous examples also exist in the keyboard music of Domenico Scarlatti, but the effect—arresting when seen—is brought off splendidly by Mr. Vinikour.

It is rare that the term ‘moving’ can be used in response to a performance of solo music for harpsichord.  The instrument itself falls victim to hints of dry academia, but the gifts of master composers to create music that explores the dramatic possibilities of their chosen instruments should never be ignored.  In the case of Rameau’s music for the harpsichord, which predictably makes use of many of the French forms that shaped Baroque music, it is important to also remember that Bach and Händel used these same French forms—notably the courante and sarabande—as the foundations for some of their most memorable works.  Rameau, too, realized the potential of adhering to the forms familiar to him, and it is in the ‘delicate’ courantes and sarabandes on these discs that Mr. Vinikour’s skills are at their most poignant.  Playing with elegance and an innate sense of phrasing that allows lyric inventions to shine through the natural flow of the music, Mr. Vinikour achieves the distinction of offering playing that is genuinely moving.  It is only a very fine artist who can play the harpsichord in a fashion that shows that a piece like ‘Les Soupirs’—‘the Sighs’—is expressive of genuine sentiment and not merely a Baroque frivolity with an heavy title.

The scant historical evidence available to today’s musicians and audiences suggests that Jean-Philippe Rameau was a droll, somewhat prickly, and perhaps intentionally mysterious man.  Emily Dickinson wrote, ‘My Wars are laid away in Books,’ and hearing this new recording of his music for harpsichord raises the question of whether Rameau’s ‘wars’ were laid away in Music.  Is it possible to discern the measure of a man from the music that he composed?  Whether or not elements of the life that are lost to musicology are fused into Rameau’s music, it cannot be doubted that artists who apply their souls to their performances get at the souls of the composers whose music they perform.  Gifted with access to an instrument capable of musical magic when united with the hands of a master, Jory Vinikour proves anew in the harpsichord music of Rameau that he is a master of both the practice and the poetry of music-making. 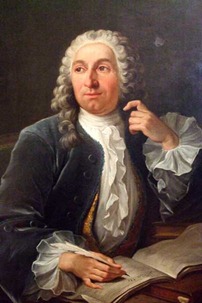