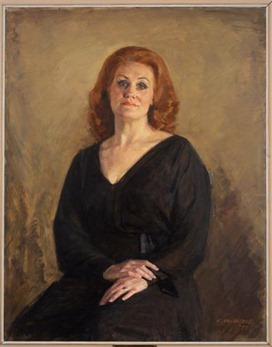 In what seems a lifetime ago, in 1994, I was a sixteen-year-old schoolboy, studying piano and violin and spending the money given to me by my parents for school lunches on the few opera recordings that were available in my area at that time.  First, there was the Philips recording of La Bohème conducted by Sir Colin Davis, with the slightly frail Katia Ricciarelli and the still-golden-voiced José Carreras.  The trap was set.  Then, perhaps a month later, there was the DECCA Fidelio, an appealing introduction to the inimitable Birgit Nilsson.  After a few weeks, the little collection expanded to include Sir John Pritchard’s recording of Raymond Leppard’s much-discussed (and much-dismissed) Glyndebourne L’Incoronazione di Poppea, surely the best recording of Carlo Cava’s unique voice and a welcome document of uncommonly passionate performances by Magda László and Frances Bible.  Still, I was not yet ready for this, and the recording—now one that I love for the seriousness with which it addresses the emotions of Monteverdi’s music—quickly changed hands.

It was another recording conducted by Sir John Pritchard that transformed opera from a casual interest, an exploration of a teenager’s curiosity, into a lifelong devotion to a magnificently strange art that manipulates reality and, at its best, changes listeners’ perceptions of themselves, their lives, and their roles within their communities.  The recording that revealed that power to this listener was of Verdi’s La Traviata, a performance shaped by a poised but direct Alfredo from Carlo Bergonzi and a Giorgio Germont as well-sung as any on records from Robert Merrill.  At the center of the performance is the Violetta of the Australian soprano Dame Joan Sutherland.  The critiques of Sutherland’s performance in her first recording of La Traviata are typical of those that her performances and recordings met throughout her four-decade international career.  As Violetta, Maria Callas is more enthrallingly visceral, more emotionally on the wire; Ileana Cotrubas is more delicate, more alluringly fragile; Renata Scotto is the consummate tragedienne, the perfume of a life ebbing clinging to her every utterance; Licia Albanese’s singing shimmers with femininity and doomed grace; Mirella Freni brings limpid tone, easy charm, and idiomatic delivery of text and music.  Aside from Callas, however, for which Violetta are the eruptions of coloratura in ‘Sempre libera’ as completely integrated into the vocal line, expressions of flippant but panicked joy, as in the singing of Sutherland?  By which Violetta are the dramatic demands of the Second Act more fully mastered, the voice soaring where others struggle?  Which other Violetta faces the top A’s of ‘Addio del passato’ with greater security?  For this listener, in Violetta’s music there are Callas and Victoria de los Ángeles, but first there was Dame Joan Sutherland.

Having first seen an operatic performance in 1990, the year of Dame Joan’s retirement from the stage, I never enjoyed the opportunity of hearing her remarkable voice in the space of a large theatre.  Hearing her commercial recordings, from the early Bach Cantatas and Don Giovanni to the late-career Adriana Lecouvreur and Ernani, along with dozens of ‘live’ performances, I came to cherish the opulence and power of her voice at least as much as those whose good fortune allowed them to hear her in the world’s opera houses.  Hers was the rare voice that combined Wagnerian dimensions with an astounding—perhaps even more astounding for being produced with minimal evidence of its mechanics—technique that encompassed the most difficult music in the dramatic coloratura repertory.  Hers was not the voice of the thin-toned coloratura sopranos who inhabit the oxygen-deprived environs of the stratosphere: the staccato top F’s of the Königin der Nacht were there but only just: the thrill of her Königin was the atypical power of the octave descending from top C.  Her top E-flat, a note that ignited the air in all the world’s major opera houses throughout her career, especially in Lucia di Lammermoor, rang with the authority of a dramatic soprano’s top B.  Even those who advocated for this or that soprano, who complained bitterly and sometimes loudly that her diction was poor and her acting elementary, admitted that the voice was a wondrous anomaly.  A marvel of Maria Callas’s artistry was that she could sing Brünnhilde or Kundry one night and Lucia or Norma the next and fully inhabit both performances.  With one voice, Dame Joan could enchant as Händel’s Alcina, suffer as Donizetti’s Maria Stuarda, and find redemption as Puccini’s Suor Angelica.  Perhaps the words were not always ideally clear, but the music never suffered at her hands, and if she sang a role she knew where she wanted to go in it.  Guided by her husband, she knew precisely what she should sing and when she should sing it, and not just in the last seasons of her career; and that self-discipline, a mark of a great singer, resulted in audiences for her final performances perceiving not what time had taken away but what a sound technique had preserved.

There are many singers past and present whose performances, in opera houses and on records, have shaped my understanding of music.  To the influence of Dame Joan Sutherland I attribute not my knowledge of opera, such as it is, but my love for it.  It was her singing that convinced me that this brilliant, bizarre thing is not merely a diversion but a vital aspect of the complex art of humanity, a genre that perseveres because it lives in the hearts of those who love it.  She loved it, and that is audible in every recording that she made.  A voice such as hers is not made by men, whether by creation or by study; nor is it subject to imitation or duplication.  She was a woman like any other, flawed and fascinating, but neither any other woman nor any other voice will ever be Dame Joan Sutherland. 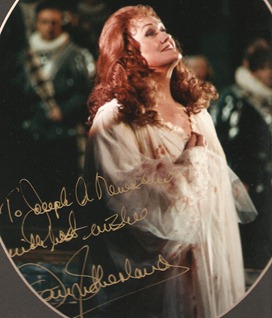