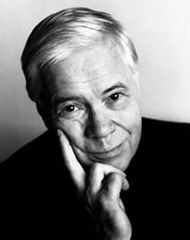 Obituaries for famous singers are not unlike shareholders’ reports for Fortune 500 companies in that those who are likely to read them almost invariably know the contents before grappling with the first sentence. This is perhaps doubly true for remembrances of Dietrich Fischer-Dieskau, the legendary German baritone and champion of the Teutonic Lieder repertory who died at the age of eighty-six on 18 May. Cited as the most recorded singer in history and as central—and controversial—in discussions of the art of singing in the Twentieth Century as Maria Callas, Fischer-Dieskau is an artist whose four-decade career coincided with what many observers deem a disintegration of artistic standards in the world’s opera houses, concert halls, and recital venues. Dietrich Fischer-Dieskau’s voice aged along with the body by which it was produced, as voices do, but the singer’s adherence to his goals of shaping musical phrases through attention to text and imperturbable technique was consistent and, ultimately, monumental.

As a teen studying violin and just beginning to explore opera, I discovered Fischer-Dieskau in a Deutsche Grammophon studio recording of Gluck’s Orfeo ed Euridice; unusual territory for me and, as I learned, also for Fischer-Dieskau. Knowing nothing about Gluck and perhaps even less about voices and singing, something nonetheless seemed inherently wrong. The Orfeo possessed a superb voice, of that I was certain, but whereas Euridice and Amore floated streams of sound above an orchestral foundation Orfeo suffered by a reversal of those means, the voice pulling at the accompaniment from below. The term castrato was to me merely an unfortunate cognate then, so the provenance of Orfeo ed Euridice eluded me. Interested but dissatisfied, I moved on.

A few years later, as a budding baritone, the music of Verdi became a source of fascination, solace, and enlightenment, and through it I ‘met’ Lawrence Tibbett, Leonard Warren, Robert Merrill, Tito Gobbi, Giuseppe Taddei, Sesto Bruscantini, Piero Cappuccilli, Cornell MacNeil…and there, too, was that Fischer-Dieskau fellow again. Hearing the DECCA Don Carlo was a revelation, particularly after reading the accepted wisdom of decades of amateur and professional critics (which told me that Tebaldi was too old, Bergonzi too polite, Bumbry too wild, Solti too Germanic, and Fischer-Dieskau—well, too much Fischer-Dieskau). I found that, by transcribing what I heard from Bergonzi, I could recreate Don Carlo’s music almost exactly as it was noted in Verdi’s score. The mature Tebaldi was hardly the teenaged Elisabetta di Valois of history, but Verdi’s Elisabetta she was to the life, regal and turning the strain in the voice to dramatic effect. Bumbry breathed fire but with a voice of genuine star quality, and one can hardly accuse Eboli of being a wan character. Fischer-Dieskau, whose operatic career began with a performance of Don Carlo in Berlin, was not a ‘traditional’—which is to say Italiante—Posa, but listening intently, finding all of the role’s technical hurdles cleared with élan, I could not imagine that Fischer-Dieskau’s performance was one with which Verdi would not have been thoroughly pleased. This led me to the Deutsche Grammophon Rigoletto, which has the distinction, thanks to the work of the brilliant Rafael Kubelík, of being among the best-conducted Rigoletto recordings. To the elegance and tonal refulgence of Bergonzi’s Duca was added the plangent, poignant Gilda of the young Renata Scotto. After hearing Gobbi and Taddei as Rigoletto, how could the lighter, utterly different voice of Fischer-Dieskau compare? Indeed, it could not compare, but an utterly different voice produced an utterly different performance, one in which nuance triumphed over vocal weight. There audibly were different tones for public and private utterances; a nasty, hectoring jester among the Duca’s courtiers and a sad, tender, even slightly claustrophobic presence with Gilda. Musically, there perhaps are too many compromises to pronounce Fischer-Dieskau’s Rigoletto a complete success, but the tragedy is more palpable than in many authentically Italianate performances.

It is this drive for emotional engagement that is, for me, the greatest element of Fischer-Dieskau’s artistry. This is not to say that there are not examples of truly magnificent vocalism in Fischer-Dieskau’s discography, not least in his scores of Lieder recordings, some of which have not been equaled in the years since their preservation. His Wolfram in the Otto Gerdes recording of Tannhäuser on Deutsche Grammophon is as fine an account of that role—musically and dramatically—as has ever been recorded, the famed ‘O du, mein holder Abendstern’ sung with exquisite grace and bel canto phrasing. Early-career recordings of Lohengrin and Tristan und Isolde reveal an atypically thoughtful Wagnerian who, sure of the sufficiency of his technique to meet the demands of the music, offers unique characterizations. Later, Fischer-Dieskau’s Rheingold Wotan for Herbert von Karajan and Deutsche Grammophon, arguably lacking the vocal amplitude required for the music in live performance, offered a veritable master class in the shaping of Wagner’s musical phrases, breathing life into the Walvater’s dignity, nobility, and inner conflict. No other Wotan on records conveys quite the depth of heartbreak that Fischer-Dieskau brings to Wotan’s farewell to Brünnhilde in the final pages of Walküre, recorded for Bavarian radio under Kubelík’s baton.

His prowess in Lieder repertory is rightfully regarded as unsurpassed, but for me the pinnacle of Fischer-Dieskau’s work as a singer and an artist is his concept of the role of Barak the Dyer in Richard Strauss’s Die Frau ohne Schatten. In the interest of full disclosure, I should admit that I esteem Frau ohne Schatten above all of Strauss’s operas and above almost all other operas, so it should not be surprising that any singer who can deliver a credible performance in this uncommonly daunting score can make a lasting impression. Barak is, in essence, a cousin of the literary Everyman, an ordinary man of no special intellectual distinction whose existence as a laborer, protector of deformed brothers, and husband of a difficult woman seems banal in comparison with those of the gods, kings, and heroes who are the usual operatic subjects. The finest accomplishment of art is not to impose the heroic upon the unexceptional but to recognize and celebrate the poetry inherent in even the greatest simplicity. Fischer-Dieskau emphasized the nobility of Barak, expressing the humanity of a man who endures his wife’s cruelty and petulance because he loves her; not, as some singers portray him, because he is perceptibly at the end of his tether, not because he feels that he has no other options, not because he submits to an unkind destiny, but because he genuinely and unconditionally loves the woman who shares his life. Fischer-Dieskau’s Barak exulted in this devotion, making it the defining aspect of the character. Rather than pitying Barak when he falls victim to his wife’s coldness and rejoicing when, in the opera’s final act, she realizes—or, more accurately, accepts—that she loves him, the listener senses from Barak’s first appearance the inevitability of his ultimate fulfillment. The eloquence with which Fischer-Dieskau sang the role achieved the fusion of poetry and simplicity that, at its heart, makes of the complicated relationship between Barak and his wife a story of love against odds as approachable and touching as that of Rodolfo and Mimì or Roméo and Juliette. For this alone, but also for so many similar moments of revelation and comprehension in music spanning three centuries, Dietrich Fischer-Dieskau is an artist whose work will never be forgotten. 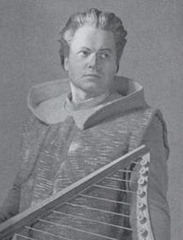