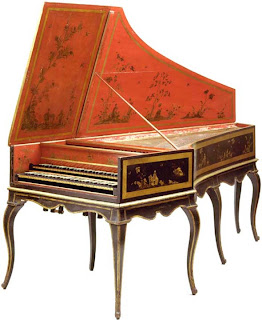 The first thing that must be said about the recital given by eminent harpsichordist Jory Vinikour at the College of Charleston on 7 April 2008, is that this was the sort of performance that proved beyond contention that there are no archaic instruments, only performers who fail to comprehend that at their own fingertips is the critical ability to transcend eras and styles to shape performances that excite, entice, and enlighten.

Mr. Vinikour, an American-born Fulbright Scholar now resident in Paris, offered a performance that explored repertory ranging from music originally composed for the Elizabethan virginal (an instrument at which the unsullied Sovereign herself is reported to have been little short of a virtuoso) by Thomas Tomkins (1572-1656) to a new work from young French composer Régis Campo (born 1968), a piece on which the ink was practically still wet. That Mr. Vinikour pursued this tremendously varied repertory with such complete technical mastery is testament to his consummate virtuosity: that he also managed to present this program as a single arc, with no breaks in continuity or jarring disjoints in style, is evidence of considerable insight and artistry.

Virtuosity in any performance at the harpsichord is—or should be—a forgone conclusion as the music for the instrument, with its unique ‘plectrum’ response and limited capacity for sustained tones, is almost invariably of a certain difficulty. Even so, playing of the technical skill displayed by Mr. Vinikour is surely rare. With a prominent career as soloist, accompanist (to celebrated artists including countertenor David Daniels, soprano Annick Massis, mezzo-soprano Magdalena Kožená, and mezzo-soprano Anne Sofie von Otter, with whom Mr. Vinikour collaborated on the acclaimed Archiv/Deutsche Grammophon disc Music for a While), répétiteur, and conductor, Mr. Vinikour has assimilated and mastered all the elements necessary to developing a musical talent of the first rate. Mr. Vinikour’s playing in Charleston was poised and unperturbed but also rewardingly passionate: rather than seeming a recital of centuries-old music from which our capable performer blew the dust just prior to taking his seat before the keyboard, the performance emerged as an invigorating showcase of an instrument, consigned in America largely—and sadly—to continuo for secco recitative, with limitless possibilities. This was a performance in which, the technique (as with Martha Argerich at her best) beyond reproach and the fingers unfailingly falling where they should, poetry could be created in sound.

Especially impressive, to both this writer and to the audience of attentive students and members of the musically-sophisticated Charleston community (home, after all, to the prestigious Spoleto Festival), were the contemporary compositions offered. Graham Lynch’s (born 1957) Admiring Yoro Waterfall was, despite its decidedly post-Stravinsky idiom, a piece of intense beauty, shimmering sounds cascading across the range of the instrument. Mr. Vinikour’s playing of this piece seemed to suspend time and also revealed that gorgeous lyricism need not compete unfavorably with rapid-fire bravura passages in music for the harpsichord. Perpetuum Mobile, composed by the aforementioned Mr. Campo, was a superb affair of contrasting intensity and sublimity, colors shining through Mr. Vinikour’s playing like light and shadow on a harsh but incredibly beautiful landscape. Similarly, Toccatas by Harold Meltzer (born 1966) pursued thematic ideas across a broad canvas, developing upon the models of Bach and Pachelbel. The two latter pieces were both dedicated by their composers to Mr. Vinikour, and it was easy to share what surely were delighted reactions by these composers at hearing their music played with such elegance, suavity, and aplomb.

In addition to the two pieces originally composed for the virginal by Thomas Tomkins, the balance of the recital consisted of suites by Baroque composers Johann Caspar Ferdinand Fischer (1656-1746) and Pancrace Royer (1705-1755), respectively, both of them containing music typical of the Baroque era that might best be described as barnstorming, music that highlights the virtuosity of the performer. Mr. Vinikour managed to convey much more than mere display, however.

The performance was brought to a close with an encore consisting of music by the French master of the keyboard François Couperin. To this Mr. Vinikour brought nothing short of complete authority, capping in an exuberant manner an evening that fully revealed the expressive possibilities of the harpsichord, not only in its ‘native’ Baroque repertory but also in music that challenges both player and audience with its modernity. Without having the luxury of considerable experience with solo harpsichord performances, I daresay nonetheless that this is a rare occurrence, and Charleston is to be praised for having hosted it and envied for having enjoyed it.
© by Joseph Newsome