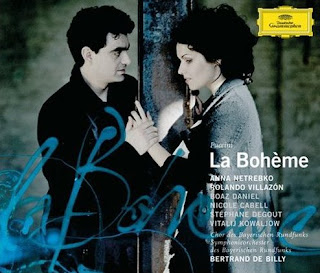 The first question that occurs to any opera aficionado, no matter how strong his affection for Puccini and his seminal works, concerns why there could possibly be a need in the Bohème-saturated and struggling operatic recording market for another performance of the composer’s tale of love and death in Paris. One possible answer is posed by the fact that the recording, beautifully recorded by Deutsche Grammophon and mastered by their top-drawer team at Emil Berliner Studios, is co-produced by IMG Artists, the arts representation house. Can there be any further doubt, then, that this recording is intended, first and foremost, as an act of publicity to capitalize upon the press generated by the recording’s stars?

Whether or not one likes it, there is considerable attention and a palpable sense of an ‘event’ wherever Anna Netrebko appears. During her now-legendary Salzburg Festival run in La Traviata, eager Salzburg shopkeepers hastened to display ‘Netrebko shops Here’ signs ere the beautiful Russian diva could fully depart their establishments. Netrebko’s appearances at the MET, whether as Gounod’s Juliette or Donizetti’s Norina, have unfailingly produced box-office pandemonium. Surely, however, Netrebko is arriving at the moment in her career at which serious-minded opera connoisseurs begin to question whether the voice justifies the hype.

The evidence of Netrebko’s recorded Mimì leaves this question largely unanswered. Perhaps the voice suffers somewhat in comparison with the woman as Netrebko is an extremely beautiful woman and an often compelling actress. The voice, however, is prone to losing focus and absolute grasp of the pitch. An aspect of Netrebko’s Salzburg Violetta that bothered me was her tendency to offer punctuated phrases rather than broader paragraphs of both vocal identification and character development, and this Mimì shows little improvement in that regard. Netrebko’s voice is lovely, and this counts for much, perhaps more so in Puccini than in the scores of other composers. The voice is rounded, steady, and audible throughout. The tone is often very dark, lending the character a certain aspect of maturity that is not unwelcome. Were this an interpretive device rather than an indication of a capable but unexceptional singer bringing her one basic vocal color to the role it could be appreciated more emphatically. Netrebko brings nothing to Mimì that has not been heard before and, in sum, sings in a generalized manner that is effective as satisfying vocalism but somewhat less than that as music drama. Where, for instance, is the wide-eyed wonder at falling in love in the first act that Mirella Freni displayed as vividly on records as in the theatre? Where is the playfulness Albanese brought to her subtly erotic teasing of Rodolfo as they depart for the Café Momus? Where is the tragic grandeur that Tebaldi brought to the third act? Where are the pallor of death so clear in Callas’ singing and the irrepressible longing for survival implicit in Scotto’s performance of the final scene? That Netrebko’s Mimì fails to ascend to the Pantheon which houses the interpretations of her celebrated predecessors is not unforgiveable. What is damaging to the performance, however, is that one ultimately fails to connect emotionally in a deeply meaningful way: this Mimì is simply a nice girl with a pretty voice who unfortunately takes ill and dies too young. One is sad for her fate but, when she has embroidered her last delicate flower, does not truly miss her all that much.

Lauded throughout the world since her victory in the Cardiff Singer of the World competition, young soprano Nicole Cabell has enjoyed the doors of nearly all of the world’s major opera houses opening to her. DECCA were quick to sign her on for their most recent recording of Porgy and Bess (conducted by John Mauceri—the most compelling reason to hear the recording), and Opera Rara have recently brought out a studio recording with Cabell in the title role of Donizetti’s Imelda de’ Lambertazzi, following acclaimed concert performances in London. Here singing Musetta, Cabell shares with Netrebko an all-purpose approach to her performance, singing without significant difficulty but also without nuance or particular distinction. One can argue that Musetta is essentially a one-dimension role, her prayer in the final act notwithstanding, and Cabell does not dispel this notion. Her phrasing is square and unimaginative, but she remains a very young singer. Tonally, again rather like Netrebko, the voice is attractive without being exceptional. Truly memorable Musettas are few indeed, and Cabell renders her part without managing to join their ranks.

Boaz Daniel sings Marcello with a voice that seems small for the role but brings involvement and commitment to his performance. Bass Vitalij Kowaljow (try saying that after a ripping evening at the Momus!) brings solidity and some humor to Colline. Smaller roles are mostly taken with professionalism, to generally good effect.

Meriting special mention is young baritone Stéphane Degout as Schaunard. It must be said that Schaunard is not an ideal assignment for Degout’s voice, which possesses a remarkably lovely hue that reminds one of the baritones of the classic French school. Degout nonetheless approaches his performance with careful inflections, masterful coloring of the tone, and genuine joie de vivre. The beauty of Degout’s voice and integrity of his performance in an unlikely role remind one that Schaunard was also an early role for another sublime baritone on the brink of a great career: Hermann Prey.

The jewel of this Bohème is the Rodolfo of Mexican tenor Rolando Villazón. Like that of his leading lady, Villazón’s tone is also dark, but he is almost wholly successful in avoiding (and, at worst, minimizing) the nasality that is prominent in many Latin tenors. There is youth bursting from every line that Villazón utters, and the fact that Rodolfo is a poet is not lost on Villazón. There is greater technical care in Villazón’s singing than has sometimes been the case, and signs of strain and forcing are very rare. Villazón’s performance is shaped by an impetuosity that seems derived first from joy and then from despair, and the performance as a whole is improved and enlarged by his participation. Whether a very fine Rodolfo makes a complete Bohème palatable remains debatable, but Villazón’s performance is the undoubted success of this recording.

Choristers and orchestra acquit themselves with dignity and technical skill, nearly matching their famed Viennese rivals and missing little of the passion brought to the score by Italian performers. DGG have given them a recording of near-demonstration quality in which to display their prowess.

Bertrand de Billy, a conductor of eloquence and poise, is unfortunately not altogether successful at La Bohème. Recognizing their importance and emotional significance (and sometimes the fact that they merely are fantastic tunes), de Billy elongates certain passages: a different cast might well have responded with increased involvement and heightened attention to the text. In this case, however, the performance occasionally drags, seeming weighted down by attempts at underlining points of musical and dramatic reference that should be obvious. Still, de Billy has an ear for orchestral sounds and a talent for manipulating the orchestras under his command to produce textures that support the singers in ways that suggests an uncommon affinity for conducting opera. There is not quite so much evidence of this accomplishment in this performance, but de Billy presides effectively over a Bohème that fulfils half of its hyped promise.
© by Joseph Newsome