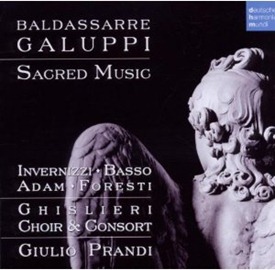 Born in 1706 on the island of Burano in the Venetian Lagoon, Baldassare Galuppi is among one of the ‘forgotten generations’ of composers, in his case that which spanned the valley between the peaks of the Baroque and early Classical periods.  Consequently, the music of Galuppi, even when approached with fresh ears, is condemned to always sounding vaguely familiar without remaining firmly in the memory, with its echoes of Vivaldi mixing with suggestions of Paisiello, Salieri, and even Haydn.  That Galuppi was a master craftsman is never in doubt, whether one’s exposure is to his operatic, sacred vocal, or instrumental music: he was celebrated throughout his life, after all, holding posts as prestigious as Director of Music at Venice’s landmark Basilica di San Marco and Court Composer at the Imperial Court of Tsarina Catherine the Great.  Whether Galuppi was a composer of true genius is less apparent, however, his music proving almost unfailingly pleasing but lacking the indisputable hallmarks of an individual style.  There is certainly an element of advocacy in Ghislieri Consort’s new recording of sacred music by Galuppi, but the recording succeeds most audibly in the sense that is vital to any recording, that of producing high-quality music-making that expands the strengths of the music at hand.

The works on this disc—an undated Dixit Dominus, the Nisi Dominus of 1777, the Kyrie originally composed in 1746 and extensively revised in 1782, the Gloria of 1779, and the Credo of 1781—owe much to the Venetian School of the late Baroque, especially the sacred music of Vivaldi.  [Several notable works previously attributed to Galuppi have, upon academic scrutiny, been re-attributed to Vivaldi, in fact.]  On the surface, it seems surprising that music dating primarily from the last quarter of the Eighteenth Century is so comparatively little influenced by Classicism as it was then developing north of the Alps.  It should be remembered, though, that the model of Alessandro Scarlatti remained a large influence on sacred music throughout Europe well into the first decades of the Nineteenth Century.  What is remarkable in the works of Galuppi on this disc is the mastery of form and melodic shaping displayed by a composer who, at the times at which most of these pieces were created, was in his eighth decade of life.  To ears accustomed to the contemporaneous Masses of Mozart, these pieces by Galuppi sound undeniably old-fashioned, but they are enjoyable, often beautiful examples of the stile antico-infused church music that remained popular in Italy throughout the Eighteenth Century.  Judging from the perspective of the pieces on this disc, Galuppi’s sacred music was more original than that of many of his Italian contemporaries, and this originality combined with the obvious sincerity of the music makes acquaintance with these pieces very welcome.

Twenty voices strong, the Ghislieri Choir (containing, as one might expect of an Italian ensemble, female rather than male altos) sing with ample power but the requisite clarity for fugal passages.  The blend of the voices is excellent, as often is not the case in ensembles specializing in ‘period’ performance, and the Choir is particularly impressive in the grand fugue on ‘Cum Sancto Spiritu’ which ends the Gloria.  The Ghislieri Consort, consisting of twenty-two players including theorbo and organ and led by Giulio Prandi, play with graceful tone and the easy virtuosity required by music of Galuppi’s era.  Choir and Consort respond effortlessly to Maestro Prandi’s idiomatic leadership, giving Galuppi’s music the same enthusiasm they might offer to that of an undoubted master.  The result of their labors is a recording that makes a strong impression without overstating the value of the music.

The fours soloists who all contribute capably to the recording are frequently encountered in performances of Baroque repertory.  Bass Sergio Foresti, a familiar presence in many productions of Händel’s operas, sings with his customary security of tone, firmness of technique, and dedication of purpose.  Unlike his Northern European contemporaries, in whose works darker sonorities were growing more popular, Galuppi gave the bass soloist relatively little to sing, but Mr. Foresti acquits himself with his usual aplomb.

The tenor soloist has more to do, not least in the Domine Deus Rex Caelestis section of the Gloria.  Krystian Adam brings to this music impressive flexibility and a voice of silvery purity.  These qualities are complemented by the elegant singing of soprano Roberta Invernizzi, by whose contributions many recordings of Early Music and Baroque repertory have been improved considerably.  Taking perhaps the largest role in these works by Galuppi, Ms. Invernizzi displays all of the talents for which she is admired: bright, lovely tone; facile brilliance of technique; and vibrato that is slight in adherence to accepted theories of period practice but far more attractive than the straight-toned approach of many Baroque specialists.  Ascents into her shining upper register are handled by Ms. Invernizzi with clarity but caution to avoid undue emphasis on higher tones that would disrupt the balance of the vocal lines.

The artistry of contralto Romina Basso is also familiar from many acclaimed performances and recordings of Baroque repertory.  The darkness of Ms. Basso’s voice lends a certain element of mystery to the sound: in Galuppi’s music, this mystery easily translates into an implicit mysticism.  Though the challenges that she faces in Galuppi’s music are not as imposing as those that she regularly meets in her Händel roles, the strength and beauty of Ms. Basso’s singing are as impressive as ever.  Her contributions to this recording are exceptional, true gifts to the composer.

If his sacred music is not of the same quality or inspiration of the greatest composers with whose careers Galuppi’s own compositional tenure intersected, it is indeed the work of a master craftsman, firmly in the Italian tradition of the early Eighteenth Century but also adopting attitudes of emerging Classicism.  The performances on this disc bring fine achievements by all of the artists involved, proving once again that committed musicianship produces impressive music.  Successful on its own terms, this disc whets the appetite for more of the ‘lost’ music of Baldassare Galuppi. 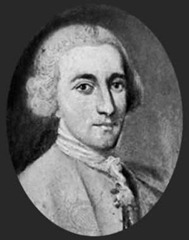