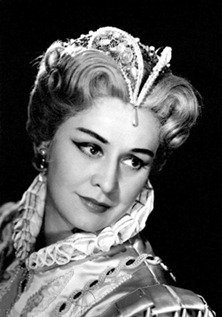 The goal of writing for Voix des Arts which I pursue with both greatest pride and strongest zeal is that of objectivity.  There are subjects about which even the most dedicated of writers cannot maintain objectivity, however, and for me one such subject is the wondrous soprano Sena Jurinac, who passed away on 22 November at the age of ninety.  Few artists have shaped my musical perceptions or affected my understanding and appreciation of music as powerfully as Ms. Jurinac, whose voice will remain in my mind’s ear among the most priceless artistic treasures of the Twentieth Century.

I was only four years old when Ms. Jurinac gave her final performance and so never heard her ‘live,’ and I recall neither when nor in what music I first heard her voice.  What I shall never forget, derived solely from recordings of her performances, is the impact of her focused, gorgeous tone in music by Mozart and Richard Strauss.  As Tchaikovsky’s Tatyana, even singing in German, Ms. Jurinac combined the intellectual insights of Russian singers like Galina Vishnevskaya with vocal beauty and security seldom heard from Slavic singers.  As Puccini’s Cio Cio San, she was all the more moving and ultimately pathetic for carrying herself with such dignity, like a true Japanese, and soaring over Puccini’s dense orchestration with sounds of doomed triumph.  As Strauss’s Octavian, she poured out sound that was aurally equivalent to the gleam of the eponymous silver rose, proving the proud but passionate young aristocrat to the core.  As Tosca, she was magisterial, nagging but frail and the consummate prima donna, and as Jenůfa she was tormented and ultimately transcendent.

In the music of Mozart, Ms. Jurinac offered in virtually every performance that she sang a veritable masterclass in the art of poised rendering of the Salzburg prodigy’s music.  This affinity for the music of Austria’s most famous composer perhaps accounted in part for the affection for Ms. Jurinac that developed in music-loving Vienna, where she was for a generation one of the brightest stars of the Wiener Staatsoper and one of the artists whose brilliance resurrected the Company after the Second World War.  As Ilia in Idomeneo, she was from the start a broken woman in search of healing through renewed hope and new love.  As Elvira in Don Giovanni, she was too much in love to accept the betrayal she felt so keenly.  As the Contessa in Le Nozze di Figaro, she was sustained by memories of the wooing of her Conte.  In hindsight, what impresses most in Ms. Jurinac’s singing of Mozart repertory is her ability to be expressive, accurate, and unfailingly stylish without in any way altering the voice with which she sang the music of Beethoven and Wagner.  A ‘period’ approach is not required when timeless artistry informs a singer’s work.

For me, to hear the voice of Sena Jurinac is to understand why, after nearly three thousand years, the myth of Orpheus remains meaningful.  She was an artist for whom music was the natural expression of human emotion and the path to Olympus.  The integrity and intensity with which she sang were remarkable even in an age of superb singers.  On this day on which Americans express thanks for blessings of happiness, health, and comfort, fervent thanks are offered for the life and career of the irreplaceable Sena Jurinac.