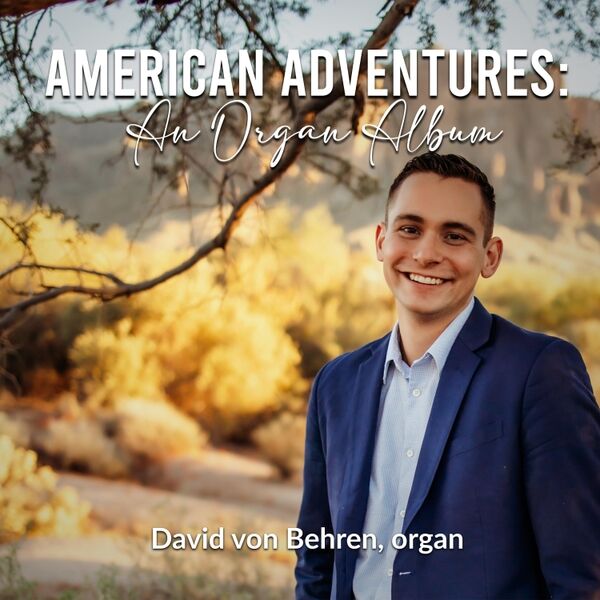 Perhaps more than any other instrument in the traditional Western canon, the organ elicits deeply personal responses from virtually all listeners. Whether evocative of celebratory occasions, sad events, private emotions, or grand public ceremonies, the sounds that an organ can produce offer countless interpretive avenues, traversal of which enables a gifted organist to communicate with each listener differently but with equal efficacy. With his 2021 release French Flourishes from First-Plymouth, musical polyglot David von Behren demonstrated that one of the artistic languages in which he wields exceptional fluency is that of the organ. Continuing a nationalistic examination o​f organ​ music with a survey of pieces written or arranged by prominent American organists and composers, American Adventures celebrates the rich heritage of organ composition and performance in North America. Integrating music of contrasting pensiveness and exuberance with sacred and secular themes, American Adventures celebrates the complexities, diversity, and unifying spirit of indomitable ingenuity that illuminate America even in her darkest hours, here fashioned into a musical beacon of resilience, reverence, and rejuvenation by performances that transform the organ into the voice of a nation.

From colonial times, when Karl Theodor Pachelbel brought his father Johann’s legacy to America’s eastern seaboard, the work of visionary organists has propelled the evolution of American music. The constituent excursions that comprise this release’s journey travel sundry paths in American musical idioms, exhibiting the ways in which music for the organ is a microcosm in which the essence of American culture is cultivated and refined. The profound responsibility of this guardianship is apparent in every piece on American Adventures, von Behren’s commitment to finding within the panoply of sounds of the superb Lied Chancel organ of First-Plymouth Congregational Church (Lincoln, Nebraska) to sing America’s songs shaping his account of each work. Epitomized by his espousal of music by living composers of varying ages, the integrity and inclusivity of von Behren’s programming yield an aural panorama that is both erudite of design and engaging of execution.

The aural ambiance in which the instrument is housed—and in which it is regularly heard by the audiences whose appreciation for it supports its maintenance—is a vital aspect of an organ’s impact. The selections recorded during live performances are therefore some of the most vibrant of these American Adventures. As played by von Behren, ‘I Love Thee, My Lord,’ the first of his offerings from George Stearing’s Sacred Sounds for Organ, provides an exhilarating introduction to the instrument, the myriad symphonic capabilities of which are imaginatively deployed by composer and organist. The emotional involvement of von Behren’s performance of Shearing’s ‘There is a Happy Land’ is captivating, the jubilation of the music cascading through every moment of this account of it. Though recorded under studio conditions, the acuity of the third of the Sacred Sounds, ‘Jerusalem, My Happy Home,’ is no less potent, the piece’s melody realized with unaffected grace. Benefiting from the presence of an audience, von Behren’s playing of William Grant Still’s ‘Reverie’ spotlights a too-little-explored niche of the composer’s body of work, his distinctive musical idiom assimilated with European models recalling Sir Charles Villiers Stanford and Herbert Howells and interpreted by von Behren with a keen alertness to its populist inflections.

The organ demands and in every piece chosen for American Adventures receives complete technical command, but von Behren’s artistry extends far beyond mastery of keys, pedals, and stops. Though its sounds conjure manifold emotions, the organ is seldom regarded as an overtly expressive instrument, yet the performances in this collection affirm that a thoughtful organist can awaken an organ’s sonic soul. Thus, Joe Utterback’s treatment of the much-loved ‘This Little Light of Mine’ is here played with enthusiasm that makes the familiar tune seem wholly new, von Behren’s phrasing lending the cadences unexpected originality. He explores the psychological significance of every contrast between rejoicing and repose in ‘Hallelujah; has been restored,’ the opening movement of Dan Locklair’s 1988 liturgical suite for organ, Rubrics. Marianne Kim’s ‘Do, Lord’ also inspires an engrossing performance in which musicianship complements feeling, the work’s structure finding in von Behren an interpreter with innate finesse for its interplay of lyricism and harmonic modernity.

Listeners who are acquainted with the ‘Agnus Dei’ choral setting of the piece will discern similar sentimental depth in von Behren’s playing of William Strickland’s arrangement of Samuel Barber’s Opus 11 Adagio for Strings. The music’s meandering subject, written with remarkable understanding of timbral interactions, is here woven using an array of sonorities, the organ’s broad dynamic spectrum fully utilized and expertly recorded. Like Barber’s Adagio, Johann Sbastian Bach’s ‘Komm, süßer Tod, komm selge Run’ is most known in a different guise, having originally been composed for voice and basso continuo and first published in a volume of sacred songs in 1736. In von Behren’s sublime playing of Virgil Fox’s arrangement for organ, the Lied’s languid melody poignantly imparts the text’s longing for the tranquility of death, the mood reverently melancholic rather than maudlin.

Von Behren’s championing of music by Twentieth- and Twenty-First-Century composers engenders noteworthy performances of splendidly-crafted pieces that do not yet enjoy the global attention that their qualities merit. His delivery of Brenda Portman’s ‘Fanfare’ is fittingly vivid, the organ’s clarion sounds creating a festive atmosphere. Like Fox’s Bach arrangement, Richard Purvis’s Pastorale on the hymn ‘Forest Green,’ most memorably set for singing by Ralph Vaughan Williams, is played by von Behren with such immediacy that text is not necessary to convey the spirit of the song. This is also true of his performance of Craig Phillips’s Prelude to Psalm 40, the music’s evolving soundworld embodying the psalmist’s message in playing of unaffected gravitas. The sacred contexts of these pieces give way to secular virtuosity in Carson Cooman’s Opus 1076 Toccata-Rondo, completed in 2014. The rhythmic buoyancy of von Behren’s playing is crucial in this music, transitions of tempo and meter managed with authority.

The final of von Behrens’s recorded adventures in American music for organ is a dazzling performance of Daniel Ficarri’s three-movement Suite No. 1. Recalling the Baroque models of Buxtehude and Bach, as well as Sir Edward Elgar’s sonatas, Ficarri’s Suite begins with a rhapsodic Prelude, played by von Behren with elegance and subtle wit. The central Adagio, almost a dulcet cavatina, introduces an animated Toccata in which Ficarri honors the organ’s past and asserts his own individual compositional style. Approaching the Adagio like a Chopin nocturne, von Behren accentuated the sensuality of the composer’s writing, finding the work’s romance without over-Romanticizing his performance. The Toccata is a gift to an organist who wishes to flaunt his prowess, and this organist’s prowess is phenomenal, but here, too, the playing is inherently eloquent. The affectionate respect of Marie-Claire Alain’s playing of her brother Jehan’s music inhabits von Behrens’s performance of Ficarri’s Suite, two consequential musicians communing in an artistic exchange to which the listener is privy.

For three centuries, organists have enlivened America’s churches, concert halls, parlors, and universities with music old and new, preserving vestiges of other cultures and fashioning new modes of musical expression. From the East Coast’s vaulted chapels to the Southwest’s missions and the Conestoga wagons that transported simple instruments across the Great Plains, America’s growth has been accompanied by the organ. Many of the nation’s great instruments have their own American adventures of which to boast. In his sagaciously-chosen, magnificently-played American Adventures, David von Behren is a musical storyteller who translates America’s many musical dialects into a single language that mesmerizes and moves.