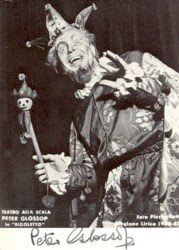 A humble son of Yorkshire, Peter Glossop rose through the ranks of small English opera companies to become the rare British baritone to enjoy an international career as a renowned interpreter of the Verdi baritone canon.

Born and raised in Sheffield in the north of England, Glossop’s first involvement with opera was in his native Yorkshire. Glossop came to London as a chorister at Sadler’s Wells, where he was appointed after only a few years one of the principal artists of the company. Glossop’s Covent Garden début came in 1961 as Demetrius in Benjamin Britten’s A Midsummer Night’s Dream.

Blessed with a robust voice with a firm, reliable upper extension, Glossop quickly won acclaim in the great Verdi roles, eventually singing his standard repertory of Macbeth, Don Carlo in Ernani, the Conte di Luna in Il Trovatore, Rigoletto, Simon Boccanegra, Rodrigo di Posa in Don Carlo, and Iago in Otello in the world’s greatest opera houses. Glossop remains the only British baritone to have sung the principal Verdi roles at La Scala.

Glossop’s 1971 début at the Metropolian Opera was as Scarpia in Tosca. Glossop’s MET career expanded his repertory with performances as Verdi’s Falstaff, Berg’s Wozzeck, Mr. Redburn in Britten’s Billy Budd and Balstrode in Peter Grimes. In the years preceding his retirement from the operatic stage in 1987, Glossop also gave critically-acclaimed performances as Mandryka in Richard Strauss’ Arabella, Pizarro in Beethoven’s Fidelio, and the title character in Wagner’s Der Fliegende Holländer. Glossop’s final performance was in Los Angeles as Sharpless in Puccini’s Madama Butterfly.

It is primarily as a Verdi singer that Glossop is remembered, not least owing to his collaboration with Herbert von Karajan in the famous Salzburg production (and subsequent film and studio recording) of Otello featuring Jon Vickers and Mirella Freni. In addition, Glossop recorded a definitive account of Verdi’s first version of Macbeth with Rita Hunter, released on CD by Opera Rara. Glossop’s recorded legacy also reflects a varied career, with performances ranging from Purcell’s Aeneas and Berlioz’s Chorèbe (Les Troyens) to Elgar’s Caractacus and German’s Earl of Essex (Merrie England).

An extroverted personality known for a lively temperament and a fondness for cavorting with the ladies, Glossop brought these same qualities to his operatic performances, creating larger-than-life portraits of troubled characters who were nonetheless capable of wrenchingly tortured pathos. The most important consideration is that, as one can hear on any of his recordings, the voice was magnificent, a beautiful natural timbre combined with a snarling power that projected thrillingly even in large theatres.
Glossop, who suffered with throat cancer during the last years of his life, is survived by his two daughters.
© by Joseph Newsome