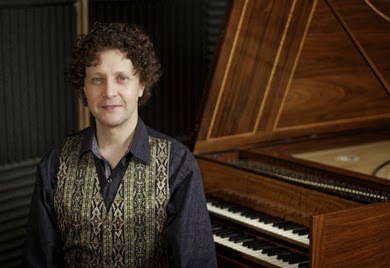 There is something magical about the infrequent unions of great music, great musicians, and great spaces. These marvels of musical serendipity are sometimes far from the eyes and ears of spectators, as it surely was when Bach sequestered himself in the Thomaskirche organ loft and played his music solely for God’s ears. More often, these events are all the more extraordinary for playing out before astonished audiences, some of whom do not appreciate in the moment the significance of what they are witnessing. Imagine seeing the deaf Beethoven presiding over the 1824 première of his Ninth Symphony in Vienna’s Theater am Kärntnertor or Geraldine Farrar portraying the despondent nun in the first performance of Puccini’s Suor Angelica at the Metropolitan Opera in 1918. To those who love Baroque repertory, internationally-renowned harpsichordist and conductor Jory Vinikour’s début at the Library of Congress with a recital of music by Bach and Händel, plus encores by Rameau and Domenico Scarlatti, was such an occasion. Born in Chicago but long resident in France, this exceptionally gifted artist is now devoting more time to his native country, where, despite recent engagements with the Chicago Symphony Orchestra, Haymarket Opera, Pegasus Early Music, and the Alabama Symphony Orchestra, his work remains far too infrequently heard and inconsistently appreciated. This marvelous Library of Congress recital, very warmly received by the capacity audience, and a Carnegie Hall performance in December should do much to rectify this neglect of one of America’s artistic treasures. Playing such as Mr. Vinikour achieved in the Library of Congress’s Coolidge Auditorium is rare on any instrument and in any context: at his fingertips, three centuries no longer separated masterpieces of the Baroque from today’s listeners.

In the Eighteenth Century, Georg Friedrich Händel’s eight suites of pieces for harpsichord published in 1720 were justifiably regarded as some of the most important works for the instrument. Not surprisingly, the suites fell into neglect in the second half of the century, as the harpsichord increasingly became a fugitive from obsoleteness hiding in the orchestra pits of Europe’s opera houses, but revival of interest in Baroque repertory in the second half of the Twentieth Century restored to the suites a measure of their original prestige. Mr. Vinikour is a model of all that is right with the historically-informed performance practice movement. His technique is centered in fingering and phrasing appropriate to the instruments of the early Eighteenth Century and the music written for them, but in this performance the music never sounded as though it was extracted from a dusty tome found in some dark recess of the Library’s collection. Perhaps his extensive work with singers—he travelled to Washington for this recital in a brief respite from his participation in the Salzburg Whitsun Festival production of Gluck’s Iphigénie en Tauride with Cecilia Bartoli—contributes to his unerring projection of principal subjects even in the most complex contrapuntal music. Opening his recital with Händel’s Suite in A major (HWV 426), Mr. Vinikour immediately provided evidence of his prowess both for playing such technically-demanding music and for exposing the full spectrum of the timbral and dynamic possibilities of the instrument at his disposal, in this case a beautiful—and beautiful-sounding—double-manual harpsichord built by Thomas and Barbara Wolf in the style of a 1738 instrument by Christian Vater. [In the interest of full disclosure, it should be admitted that Mr. Vinikour’s performance of HWV 426 was observed via video feed from the auditorium, snarled traffic in northern Virginia regrettably having delayed the author’s arrival.] The Prä​ludium was played with care for its sharply-defined rhythms and taut harmonies, and the vivid Allemande received from Mr. Vinikour a traversal that accentuates its quirky charm—perhaps Germans of Händel’s time were rather livelier than they are given credit for having been. The stately Courante was phrased with considerable eloquence, the principal theme finessed with unforced grace. The formidable strength of Mr. Vinikour’s left hand provided a firm foundation for the Gigue​​, upon which an ornate but substantial edifice was built from the raw materials provided by Händel.

Not solely because of its key, the Suite in ​F-​sharp minor (HWV 431​) is a darker, more nuanced work than the A-major Suite. The Präludium would not sound out of place in several of Händel’s London operas: played by Mr. Vinikour, it was a mercurial, stirring number that exploited the wonderful evenness of tone throughout the instrument’s compass. No emotional subtext was forced onto the Largo, the sentiments already in the music allowed to make their own effects without interference. This was also true of the fugal Allegro, its divisions delivered with awe-inspiring ease. Like that of HWV 426, the Gigue of HWV 431 is an aptly impressive finale to the Suite, and Mr. Vinikour played it commandingly. Unfeigned connection with the music at hand is ever a telltale hallmark of Mr. Vinikour’s artistry, and the expressivity that he manifested in Händel’s music—often unaccountably deemed superficial, particularly when compared with Bach’s works for the keyboard—held the audience in unusually respectful silence as he played.

Johann Sebastian Bach’s grandiloquent ​Ouvertüre nach Franzö​sischer Art in B minor (BWV 831) is the composer’s longest piece for the keyboard, one specially-crafted to take advantage of the full panoply of capabilities of the double-manual harpsichord—and, indeed, of the harpsichordist. Playing the complete recital from memory, Mr. Vinikour took all repeats in the Ouvertüre except for that of the 6/8 fugue in the first of the piece’s eleven movements. Opening with an expansively-phrased account of the Overture and Fugue, he paced a performance of the work that was remarkable for both its abiding cohesiveness and the differentiation of the distinctive moods and rhythms of each successive movement. The ​Courante revealed unexpected depths of emotion in Mr. Vinikour’s hands, and the pairs of both Gavottes and Passepieds were played with uniquely complementary energy and subtlety. The sentimental heart of the Ouvertüre, the Sarabande, both glowingly romantic and intriguingly melancholic, was shaped with incredible fluidity, the elasticity of the melodic line belying the rhythmic precision of the playing. The Bourrées and Gigue danced from Mr. Vinikour’s fingers with infectious brio. The ingenuity of the Echo drew from the poet at the keyboard playing of equal wit, the opulent timbre of the harpsichord making Bach’s invention more obvious than in many performances of the piece. Perhaps the greatest pleasure of hearing Mr. Vinikour play Bach, whether on his own or in ensemble, is discerning the depth of feeling that he devotes to performances of the composer’s music: stylish as his playing is, there is nothing academic or pedantic in his approach to Bach’s scores.

Mr. Vinikour offered as encores Domenico Scarlatti’s Sonata in D major (K96) and Jean-Philippe Rameau’s A-minor Gavotte with Six Doubles. The martial spirit of Scarlatti’s celebrated Allegrissimo Sonata was rousingly evoked by Mr. Vinikour’s powerful delivery of the fanfare-like figurations, and metronomes could be calibrated by comparison with his trills. His cross-hand technique, recreating the ‘trois mains’ of Eighteenth-Century playing, was a marvel throughout the recital. Influenced, as was Bach’s Ouvertüre, by the harpsichord works of François Couperin, Rameau’s Gavotte and variations provided Mr. Vinikour with a vehicle for a barnstorming finale to his recital. Rameau’s pyrotechnics were ignited with consummate authority and apparent enjoyment.

There were a few missed notes in the course of the recital, it is true, and a handful of passages in which Mr. Vinikour’s concentration seemed momentarily disturbed. There are many, many more mistakes in the famous radio recordings of Richard Strauss Lieder in which the composer himself accompanied sings such as Anton Demota, Hilde Konetzni, and Maria Reining, but do these flaws lessen the importance of the performances? The conscientious artist expects perfection of himself, but the great artist gives to every performance the kinds of passion and abandon that are the natural enemies of clinical perfection. Some of Maria Callas’s most beautiful performances of Tosca’s ‘Vissi d'arte, vissi d'amore’ were those in which the top B♭ wobbled perilously. She was an artist who truly lived for her art, however. Jory Vinikour is another. This was a recital in which the music of Bach, Händel, Rameau, and Domenico Scarlatti came to life like figures stepping out of a painting before the audiences’ eyes. Amidst a lifetime of unimaginative, artificial, insignificant perfection, this was the sort of recital that a listener never forgets.