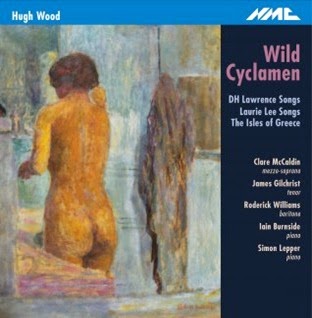 Any admirer of Art Song, whether within or beyond England’s borders, who is not familiar with the songs of Hugh Wood does himself, the composer, and the genre he claims to appreciate a gross disservice. Born in Lancashire in 1932 and educated in the art of composition by luminaries including William Lloyd Webber—whose own songs are woefully neglected, particularly in the United States—and Iain Hamilton, Wood is in many ways the quintessential British composer: gifted, raised in a musical household, and impeccably trained, he seems to have fulfilled an inevitable destiny. There is nothing ordinary or expected in the sixty-four minutes of Wild Cyclamen, this latest treasure from NMC Recordings, however. Representing a wide swath of Wood’s compositional career, the songs on Wild Cyclamen disclose the voice of a creative spirit clearly acquainted with the songs of Finzi, Quilter, Britten, and Tippett, influenced and perhaps even inspired by them, but compellingly individual. These are songs by a composer with profound understanding of and response to words: in the best of the songs offered here, the texts are set not syllabically but conceptually—indeed, often sensually, the relationships among words and music throbbing with intimacy and the sort of connection that transcends conventional modes of communication. In its purest form, song is the medium via which composers, performers, and listeners can converse in language too delicate for handling except in music. Hugh Wood’s songs are that medium, and what wondrous things they say in the performances on this disc!

In her singing of the Laurie Lee Songs, composed between 1956 and 1958 whilst Wood was studying with Hamilton and Mátyás Seiber, mezzo-soprano Clare McCaldin allies a strong, luxurious timbre and an incredible upper register that would be the envy of many dramatic sopranos with an accomplished actress’s sensitivity to both the sounds and the significance of words. Accompanied with ideal musical and interpretive synchronicity by Iain Burnside, she establishes unique moods in each song with an economy of means: not one phrase is sung with accents bolder than the music allows. She and Mr. Burnside distill the drama of ‘Boy in Ice’ into an exceptionally potent elixir, the intoxicating spirit of which is drawn from the text. The ethos of ‘The Edge of Day’ is unexpectedly enigmatic, and Ms. McCaldin uses her upper register as an interpretive device by punctuating her carefully-formed phrases with notes at the top of the staff that articulate the elevating sentiments of both music and text. The influence of Stravinsky permeates ‘The Easter Green,’ which Ms. McCaldin and Mr. Burnside approach with unbreakable concentration. The deceptive simplicity of ‘Town Owl’ is strangely unsettling, particularly when the vocal line is delivered as enchantingly as Ms. McCaldin sings it, and her account of ‘April Rise’ mines the expressivity of the composer’s diatonic structure of the song. Ms. McCaldin sang the Laurie Lee Songs in recital in the Royal Opera House’s Crush Room in 2013, and her experience with them is evident in her definitive performances on this disc. Stridency and a very slight loosening of the vibrato fleetingly affect her singing as recorded here, but neither her musicality nor the integrity of her profitable partnership with Mr. Burnside is compromised.

The DH Lawrence Songs, published in 1998 but the fruits of many years’ labors, receive from tenor James Gilchrist and pianist Simon Lepper performances of unhesitating attack and splendid imagination. As he is among the most successful Evangelists in Bach’s Passions of his and any generation, it is not surprising that Mr. Gilchrist exhibits such unshakable confidence in the high tessitura of Wood’s music, nor is the unaffected clarity with which he sings English texts unexpected. He and Mr. Lepper collaborate on an insightful account of the jarring ‘Dog-tired,’ which they follow with ardent, touching performances of ‘Kisses in the Train’ and ‘Roses on the breakfast table,’ two of Lawrence’s most evocative texts. The histrionic power of Mr. Gilchrist’s singing of ‘Gloire de Dijon’ is echoed by the unpretentious mastery of Mr. Lepper’s playing, though here and in isolated passages in other songs—and in his performance of Wild Cyclamen—the tenor’s emphatic singing occasionally threatens to overwhelm the music. The poetic grace that radiates from his shaping of ‘River Roses,’ supported by Mr. Lepper’s playing, is very effective, however, both singer and pianist phrasing with unsentimental expressivity.

Every opportunity to hear the fantastic voice of baritone Roderick Williams is a gift, but his singing of the five songs of Wood’s The Isles of Greece on this disc is truly extraordinary. One can only imagine hearing Vogl sing Schubert Lieder or experiencing the magic that Giuditta Pasta brought to the rôles composed for her by Bellini and Donizetti, but NMC’s endeavor here allows an opportunity to enjoy an equal pleasure, that of hearing Mr. Williams sing music by a living composer for which his voice is as perfectly-suited as Vogl’s and Pasta’s must have been for Winterreise and Norma. As he was for Ms. McCaldin in the Laurie Lee settings, Mr. Burnside is an ideal partner for Mr. Williams’s traversal of The Isles of Greece. Both gentlemen give to their performances of ‘Delos,’ ‘Nemea,’ and ‘Bitter Lemons,’ settings of texts by Lawrence Durrell, close attention to detail that is thorough without being pedantic. Wood’s handling of Robert Graves’s ‘Ouzo Unclouded’ is masterful, the composer’s melodic fragments unleashing the full impact of the poet’s sparse imagery. Mr. Burnside’s rhythmically rapier’s-point playing is here an especially vital asset, bolstering Mr. Williams’s bold, imaginative singing. The baritone’s and pianist’s performance of ‘In the sea caves,’ a treatment of Edmund Keeley's and Philip Sherrard's translation of a text by George Seferis, is frankly one of the most gorgeous recordings of song in the English language: reducing the voice to a ribbon of tone, Mr. Williams envelops the music with a delicate shroud of crystalline beauty. The words of the short-lived Demetrios Capetanakis in ‘The Isles of Greece’ could hope for no more eloquent articulation than they receive from Mr. Williams, whose every interpretive impulse is sensed and seconded by Mr. Burnside.

Mr. Lepper accompanied tenor Andrew Kennedy in the world première of Wild Cyclamen in Manchester in 2006, and he partners Mr. Gilchrist in an emotionally raw but musically polished performance on this disc. Though the author of the poems set by Wood, Robert Graves, did not group these texts as a cohesive narrative, Wild Cyclamen was conceived by the composer as a song cycle in the tradition of Schubert and Schumann. Starting the cycle’s examination of the development of a love affair, ‘A Dream of Frances Speedwell’ is sung by Mr. Gilchrist with the smiling insouciance of a man in the grip of burgeoning passion. The sentiments of ‘Wild Cyclamen’ are self-explanatory, and neither singer nor pianist overreaches in his execution of Wood’s musical gestures. Likewise, the atmosphere of ‘Beatrice and Dante’ is charged but never caricatured. Musically, Wood’s inspiration is at its most memorable in ‘The Garden’ and ‘The Leap,’ which are etched with silvery sincerity by Mr. Gilchrist and Mr. Lepper. The disquiet of ‘Not to Sleep’ is powerfully evinced, and the tartness of ‘The Crab-Tree’ is sharply portrayed. The ambiguity of ‘Bites and Kisses’ is knowingly conveyed by Mr. Gilchrist, the irony keenly drawn but unexaggerated. The final quartet of songs, beginning with the stark ‘Horizon,’ recount the deterioration of love, and Mr. Gilchrist proves a noble but wrenching interpreter of these songs. ‘The Window Sill’ draws from him singing of incredible concentration, the voice used as a weapon against the increasing menace of the text. Then, in ‘A Lost Jewel,’ he and Mr. Lepper conjure an air of restless uncertainty. ‘Hedges Freaked with Snow’ is a creation of which Mahler would have been proud, the near-perfect marriage of music and words symbolically contrasting with the spirit of the text: similarly, the refinement of Mr. Gilchrist’s singing and Mr. Lepper’s playing highlights the volatility of the music. Throughout their performance of Wild Cyclamen, Mr. Gilchrist and Mr. Lepper offer instance after instance of intuitive phrasing and dramatic intelligence.

Every nation should have a record label as committed to preserving the work of its composers, singers, and musicians as NMC Recordings is to documenting the best contemporary Classical Music of the British Isles. Fortunately for listeners throughout the world, the decision makers at NMC have adopted as a guiding principal the notion that anything worth doing is worth doing well. That presiding philosophy has never been more apparent than on this disc. Even in 2015, so much time is wasted with discussion of the differences that divide nations, cultures, and peoples when every nation, culture, and people can solve problems through music. A listener need not be British in order to enjoy the terrific performances of Clare McCaldin, James Gilchrist, Roderick Williams, Iain Burnside, and Simon Lepper on Wild Cyclamen. Good music and good music-making need no translation.