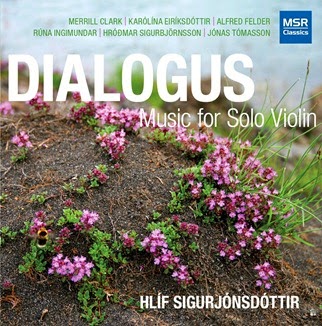 One of the greatest delights of writing about music is unexpectedly encountering a recording of unfamiliar repertory that after a single hearing has managed not only to introduce a previously-unknown artist but also to enrich and enlarge one’s understanding of a beloved instrument. In my youth, I studied the violin under the tutelage of a very fine teacher and, after mastering music by Bach and Vivaldi and even composing a few pieces for the instrument, fancied myself a capable violinist. Thankfully, that fantasy quickly dissolved when I was among truly capable violinists, and it seems all the more laughable after hearing Danish/Icelandic violinist Hlíf Sigurjónsdóttir’s MSR Classics disc Dialogus. Such sounds as she coaxes from her 2004 Christophe Landon violin in her performances of music by Jónas Tómasson, Rúna Ingimundar, Karólína Eiríksdóttir, Hróđmar Ingi Sigurbjörnsson, Alfred Felder, and Merrill Clark never issued forth from my strings. I cannot deny that, before hearing this disc, my appreciation of music for unaccompanied violin did not extend much beyond Johann Sebastian Bach’s BWV 1001 - 1006 Sonatas and Partitas. In this case, ignorance was at best false bliss: not knowing the music on Dialogus was tantamount to a drastically compromised awareness of the violin’s capabilities. Hlíf Sigurjónsdóttir is not only a world-class violinist. In the context of this disc, she is also an amazingly effective educator who enlarged the understanding of this writer, who at heart was still a daft boy who erroneously thought that he knew a thing or two about the fiddle.

From the opening bars of the first movement, ‘góđ tré’ (‘good trees’), from Jónas Tómasson’s 1983 Vetrartré (Winter Trees), it is apparent that Ms. Sigurjónsdóttir’s take-no-prisoners style is the only way of doing this music justice. Recorded with an immediacy that is almost startling at first, she attacks the music with the ferocity that the composer’s angular writing demands. In the second movement, ‘sorgmædd tré’ (‘sad trees’), this intensity metamorphoses into an energetic, bizarrely moving statement of pervasive unease, Ms. Sigurjónsdóttir’s bowing limning the interpretive significance of the music’s distinct rhythmic profile. The prevailing sentiments of the third movement, ‘óđ tré’ (‘mad trees’) are evocative of both anger and insanity, as though these are dueling responses to a common emotional stimulus. The relative tranquility of ‘pögul...’ (‘quiet...’), the final movement, is deceptive: exploiting tonal patterns with the sure hand of a modern Mahler, Tómasson created a primordial sound world into which Ms. Sigurjónsdóttir lures the listener with seductive playing.

There are unexpected Celtic specters haunting the margins of Rúna Ingimundar’s 2012 Ađ Heiman (From My Home), and the abrupt changes in direction in the piece, shaped by its homages to Icelandic folk tunes, require repeated listening before their subtle insinuations are fully revealed. This is not a straightforward, saccharinely nostalgic piece, and Ms. Sigurjónsdóttir does not eschew astringency when the music calls for it. This is not unapproachable, facelessly cacophonous music, however. Though the language is very different, the recounting of a musical journey is as successful as in any piece by Schubert or Dvořák, and Ms. Sigurjónsdóttir plays with the confidence of a traveler with the final destination always in view.

Karólína Eiríksdóttir’s 1996 Hugleiđing (Meditation) is also a piece in which ambivalent emotions collide. The composer cleverly manipulated the sonic possibilities of the instrument, causing the illusion in a performance as accomplished as Mr. Sigurbjörnsson’s that the violin is conversing with itself. She evinces complete comfort with the work’s complex rhythms and maintains an aura of undisturbed simplicity throughout the most difficult passages. The almost cautiously contemplative nature of the music, the kind of thoughtfulness capable only when one is alone with one’s own fears and feelings, is given a touchingly fragile dimension by Ms. Sigurjónsdóttir’s impeccably-judged phrasing. This is evidence of one of the most bewitching aspects of the violinist’s artistry: she is uniquely gifted at distilling from a tumultuously difficult piece of music its most concentrated psychological implications and immersing every technical feat of her playing in the music’s spiritual essence.

Composed in 2012, Hróđmar Ingi Sigurbjörnsson’s Kurìe requires a level of concentration that eludes many musicians, but Ms. Sigurjónsdóttir places herself wholly at the service of the music. The composer employed compartmentalized strands of thematic material drawn from the ‘Kyrie eleison’ of his Skálholt Mass, which Ms. Sigurjónsdóttir unites with her raptly focused playing. Melodic lines emerge with the sudden clarity of sunlight burrowing through clouds, and the violinist’s unexaggerated vibrato and flawless intonation ideally realize the enigmatic power of the music.

Swiss composer Alfred Felder’s 1987 Tilbrigđi Viđ (Variations on the Easter liturgy ‘Victimae paschali laudes’) is a vigorous piece demanding the attention to detail and uncompromising virtuosity of which Ms. Sigurjónsdóttir repeatedly proves a consummate mistress on this disc. Following in the footsteps of de Lassus, Palestrina, and Byrd, Felder suffused his music with the profundity of the Eleventh-Century text. Delving into the emotions of the music as surely as if she were intoning the cantus firmus of the Gregorian service, Ms. Sigurjónsdóttir plays Felder’s music with dazzling technical prowess that never obscures the uncommon sensitivity of her interpretation. Her performance of Tilbrigđi Viđ is remarkable for the imagination with which she both elucidates the composer’s thematic development and gives the work a singular warmth.

Written for Ms. Sigurjónsdóttir, as were several of the works on Dialogus, and inspired at least in part by her playing of Bach repertory, Merrill Clark’s 2010 ‘Sigurjónsdóttir Sonata,’ Seiđkonan (The Sorceress), is an invigorating examination of Classical techniques of composing for the violin through the lens of modernity. The Preludio that launches the Sonata sets a tone of formal grace to which Ms. Sigurjónsdóttir responds with playing of wide-ranging vision. This is followed by an account of the second movement, Song, in which the violinist’s tone blossoms with resonance akin to that of the human voice. In both the Fuga and the Waltz Scherzo, Ms. Sigurjónsdóttir’s ironclad rhythmic precision provides a stage upon which Clark’s witty music dances. The closing Ciaconna is a tour de force that aptly summarizes Ms. Sigurjónsdóttir’s awesome array of accomplishments on Dialogus: inspiring her to magical playing that validates the Sonata’s title. Ms. Sigurjónsdóttir is indeed a musical sorceress.

Dialogus is a disc from which I learned much about an instrument I mistakenly thought that I knew intimately. Beautifully recorded, thoughtfully presented, and sumptuously played, the music on this disc unveils new possibilities for the violin. In the hands of a musician less adventurous than Hlíf Sigurjónsdóttir, these pieces would perhaps seem less rewarding, but this talented lady transforms her strings and bow into conduits for an electrical surge of discovery. If more discs shared the zeal that makes Dialogus such a success, who would dare suggest that Classical Music is an expiring art?