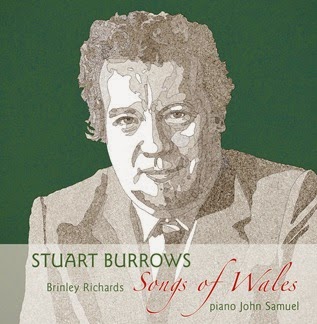 Sir Arthur Sullivan, Sir Edward Elgar, Frederick Delius, Gustav Holst, Ralph Vaughan Williams, Benjamin Britten, and Sir Michael Tippett are frequently cited as the foremost British composers of the late Nineteenth and Twentieth Centuries, but they should more properly be regarded as some of England’s finest composers. There are on that famed isle another two proud nations, of course; nations with unique musical traditions all their own. While the ruggedly beautiful landscapes of Wales are familiar to people throughout the world, the music of Wales is far less known than the iconic tunes of England, Ireland, and Scotland. How can this be true of the traditional music of a land known for singing? Indeed, with her brooks, windswept crags, and churning sea, Wales herself seems to sing, and her songs are no less ravishing than those of her British sisters. In the Twentieth Century, Welsh music was represented on the global stage by Alun Hoddinott, an exceptionally gifted composer whose ability to write effectively and memorably for the human voice is central to his still-evolving legacy. A century before Hoddinott reached his artistic maturity as a composer of Art Songs, Henry Brinley Richards’s collection entitled Songs of Wales was published. Born in Caerfyrddin (Carmarthen) in 1817, Brinley Richard​s established for himself remarkable credentials, studying in London at the Royal Academy of Music under the patronage of the Duke of Newcastle and in Paris under the tutelage of Chopin. The quality of his work in Songs of Wales is therefore anything but surprising. It is surprising that this collection remains neglected, however. Richards adopted the bardic name Pencerdd Towy in his tireless advocacy for the preservation of Welsh customs, but, intriguingly, he did not speak Welsh, a fact that the intuitiveness with which he set Welsh texts to music makes all the more unbelievable. Richards wrote in his Preface to the published edition of Songs of Wales that some observers ‘insist that style in music is more or less typical of the configuration of the country to which any music may belong.’ It is an oblique assertion, but the sentiment is unquestionably founded upon a kernel of truth: there is an unbreakable bond between a nation and its indigenous music. That bond is celebrated in Richards’s Song of Wales and in the profoundly affectionate performances of twenty-six of Wales’s most idyllic songs on this disc. This is a recording that quashes any doubts about the musical significance of Wales and her native sons.

A native of Cilfynydd, a few miles north of Cardiff​, tenor Stuart Burrows is, along with Sir Geraint Evans and Dame Gwyneth Jones, one of the trio of great Welsh Classical singers of the second half of the Twentieth Century. International success followed quickly after his professional début, his career taking him to opera houses and concert halls throughout the world. First bowing at the Metropolitan Opera as Don Ottavio in Mozart’s Don Giovanni in 1971, he went on to sing Mozart’s Belmonte in Die Entführung aus dem Serail and Tamino in Die Zauberflöte, Alfredo in Verdi’s La traviata, Gounod's Faust, and Pinkerton in Puccini’s Madama Butterfly at the MET. Also in 1971, his Elvino in Bellini’s La sonnambula at Covent Garden provided Renata Scotto with the kind of partner she so often lacked in her performances of bel canto repertory, a legitimate primo uomo. Likewise, his poetic Faust ideally complemented the reserved, demure Marguerite of Dame Kiri Te Kanawa. Many of Mr. Burrows’s finest stage characterizations were also recorded in studio, foremost among which are his mellifluously-voiced Mozart portrayals. His mastery of bel canto enabled very fine performances of Percy in Anna Bolena and Leicester in Maria Stuarda, both opposite Beverly Sills, and his Lenski in the DECCA Yevgeny Onegin conducted by Sir Georg Solti is a great achievement. Had he recorded nothing else, though, his Jack in Tippett’s The Midsummer Marriage on Lyrita would assure his artistic immortality. So, too, would this recording of Songs of Wales. The voice is not produced with the freshness of twenty years earlier, and the liquidity of phrasing no longer flows as readily as it once did, but Mr. Burrows remained at the time of this recording an artist of incomparable imagination and technical brilliance. Unlike many of his colleagues, Mr. Burrows possessed from the very start of his career the particular intelligence that enables a singer to safeguard vocal health. Few of even the most gifted singers are blessed with a natural instrument as mellifluous as Mr. Burrows’s, and even fewer treat their voices with as much care, respect, and genuine affection as Mr. Burrows lavished on his.

Recorded semi-professionally in 1986 on tapes that have deteriorated in the intervening years, there are in this performance of Songs of Wales very minor blemishes ​that could not be wholly eliminated in Tŷ Cerdd's meticulous remastering by James Clarke, Jim Unwin, and Dischromedia. In truth, the occasional deviations from sonic perfection contribute markedly to enjoyment of this disc. This a rare opportunity to hear a great singer in conversation, as it were, with music dear to him, and the foremost goal of such a conversation is never—and should never be—antiseptic precision. Accompanied with unfailing elegance and enthusiasm by pianist John Samuel, Mr. Burrows devotes to his singing of twenty-six of Richards’s song settings the same golden tone with which he sang Elvino’s ‘Prendi: l’anel ti dono’ in La sonnambula.

For the most part, Mr. Burrows selected the most charmingly romantic of the songs arranged by Richards. The mysterious aura of the opening ‘Toriad y Dydd’ (‘Taliesin's Prophesy’) draws from both Mr. Burrows and Mr. Samuel a performance of enigmatic beauty. ‘Ar Hyd y Nos’ (‘All through the night’) is captivatingly sung, and ‘Llwyn Onn’ (‘The Ash Grove’), one of the most familiar of all Welsh songs, receives from Mr. Burrows a reading of exquisite poise. The delicate sentiments of ‘Eryri Wen’ (‘White Snowdon’), ‘Llandovery’ (‘Yn Iach i ti Gymru’ – ‘Adieu to dear Cambria’), and ‘Erddigan Hun Gwenllian’ (‘A gentle maid in secret sigh'd,’ known as ‘Gwenllian's Repose’) are etched with finesse. Mr. Burrows and Mr. Samuel touchingly convey the dulcet feelings of ‘Merch Megan’ (‘Megan's fair daughter’) and ‘Pe Cawn i Hon’ (‘She must be mine’) with unaffected elocution.

The vivid imagery of ‘Clychau Aberdyfi’ (‘The Bells of Aberdovey’), ‘Dafydd y Garreg Wen’ (‘David of the White Rock’), and ‘Hela'r Ysgyfarnog’ (‘Hunting the Hare’) inspires both tenor and pianist to displays of the kind of uncomplicated use of text and music to create evocative landscapes in sound that can transform a song from a sequence of notes into a surge of emotions too intimate for mere speech. This elusive artistry also shapes Mr. Burrows’s accounts of ‘Anhawdd Ymadael’ (‘My Heart’), ‘Rhyfelgyrch Gwŷr Harlech’ (‘Men of Harlech’), and the starkly alluring ‘Difyrwch Gwŷr Dyfi’ (‘Woe to the Day’). The singer’s traversal of ‘Yr Hen Sibyl Neu Winiffreda’ (‘When I was young’) is shaped by a melancholy serenity that proves tremendously moving, and the interaction between voice and piano in ‘Rhyfelgyrch Capden Morgan’ (‘Forth to the Battle’) is exceptional. Mr. Burrows’s and Mr. Samuel’s closely-knit cooperation also engenders sparkling performances of ‘Hob y Deri Dando’ (‘All the day’) and ‘Bugeilio'r Gwenith Gwyn’ (‘Idle days in summer-time’).

The final eight songs on the disc take the listener deep into the heart of what might be rather simplistically dubbed the Welsh experience. Hearing Mr. Burrows sing ‘Y Fwyalchen’ (‘The Blackbird’) so stirringly, it is impossible not to feel that the majestic wildness of the Welsh countryside is close at hand. Both ‘Dyffryn Clwyd’ (‘Yn Nyffryn Clwyd’ – ‘The Missing Boat’) and ‘Y Ferch o'r Sger’ (‘The Maid of Sker’) are sung with mesmerizing narrative immediacy, and Mr. Burrows articulates both the words and the notes of the sublime ‘Y 'Deryn Pur’ (‘The Dove’) and the fetching ‘Tros y Garreg’ (‘Over the Stone’) with compelling grace. This is complemented by the glowingly amorous tone that he adopts in ‘Mentra Gwen’ (‘The Stars in Heav'n are bright’) and ‘Ffanni Blodau'r Ffair’ (‘Fanny’), both of which are sung magically. Mr. Burrows’s and Mr. Samuel’s performance of ‘Hen Wlad Fy Nhadau’ (‘Land of my Fathers’) radiates not the fair-weather patriotism of national holidays and public ceremonies but that of proud war veterans and private remembrances. It is a fitting conclusion to a disc that honors a nation, its singular terrain, and the extraordinary people who inhabit it.

As much as Songs of Wales is a celebration of Wales and Brinley Richards, it is a tribute to Stuart Burrows, a singer whose artistry should be a model for every young singer destined for the concert and opera stages. Great voices are present in every generation, but the singing of Stuart Burrows was never solely reliant upon his great voice. Songs of Wales is a wonderful disc that salutes an underappreciated composer. It is also a commemoration of the work of one of Wales’s finest singers. Most significantly, though, it is a disc during the fifty-eight minutes of which a venerable artist uses song to blot out the disappointments, stresses, and sorrows of a troubled, troubling world.