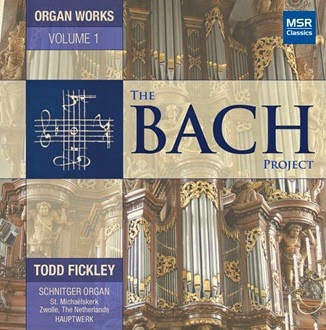 If ever a composer impacted the writing of music for a particular instrument, Johann Sebastian Bach surely altered the course of composition for the organ, the instrument of which he was an acknowledged master. It now seems inexplicable that in the Eighteenth Century it was as an organist far more than as a composer that Bach was esteemed, even by his own children, but the significance of his work to the organ repertory cannot be overstated. Furthering the German traditions of Heinrich Schütz, Dieterich Buxtehude, and Johann Pachelbel, Bach’s prowess at the organ was reputed in the Eighteenth Century to have been rivaled only by that of Georg Friedrich Händel, whose extensive travels and endeavors as a composer of opera spread his fame far beyond that of Bach. Whereas Händel’s compositions for organ are inventive and often delightfully tuneful, Bach’s organ works are, like Chopin’s piano music, virtually a genre unto themselves. Volume One of organist Todd Fickley’s and MSR Classics’ The Bach Project offers a recital of six representative works from Bach’s extraordinary catalogue of music for the instrument. This is a valuable disc solely as a fantastic recording of some of Bach’s finest music, but as a harbinger of future releases in The Bach Project it is priceless.

The sound of the instrument used for this recording is arresting from the first chord of the opening selection, and special mention must be made of the fidelity with which the organ is recorded. This is one of Northern Europe’s greatest organs, and recording it from a distance of thirty-two​ feet as supervised by engineer Jiri Zurek​ for this project both enables preservation of the clarity of the instrument’s registers and appreciation of the acoustical ambiance of the space and the five-second ​reverb​. The 1682 collapse of the tower of St. Michaëlskerk in the Dutch town of Zwolle following a fire dealt a fatal blow to the church’s original organ, an instrument that may have dated from before 1505 and had been substantially reworked in 1643. After a quarter-century without an organ, the famed North German Schnitger firm was engaged in 1718 to construct a new organ for St. Michaëlskerk. Father and sons Arp, Franz Caspar, and Johann Georg Schnitger collaborated on the design and construction of the quadruple-manual instrument, though the Schnitger patriarch did not survive to witness its 1721 completion and installation. In the subsequent 294 years, the organ has been subjected to maintenance and modification but is now restored to the closest possible replication of its original 1721 form. Though having no direct connection with Bach, the Zwolle Schnitgerorgel is emblematic of the influential school of organ-building with which Bach was closely acquainted. Its robust construction and unique timbre​ make it an ideal instrument for playing Bach’s organ music, and Mr. Fickley’s performances on this disc are enhanced by the grandeur of the instrument at his disposal.

A native of Washington, D.C., Mr. Fickley has been acclaimed throughout his career as one of America's finest ​organists. Named a fellow of the American Guild of Organists at the age of twenty-three, Mr. Fickley exhibits both stylistic and philosophical similarities to the celebrated organist E. Power Biggs, who did much to popularize Schnitger organs for the performance and recording of music from the Seventeenth and Eighteenth Centuries. Opening this recorded recital with the Toccata, Adagio, and Fugue in C Major (BWV 564), Mr. Fickley plays with unpretentious mastery, placing nothing between the listener and complete appreciation of the music. The strict rhythmic accuracy of his playing of the Toccata does not inhibit a suggestion of rhapsodic capriciousness, and he evokes the subdued atmospheres of the slow movements of Bach’s great concerti and suites with his phrasing of the Adagio. The contrapuntal writing in the Fugue often seems to require more than ten fingers and two feet, but Mr. Fickley negotiates its superhuman demands with his anything-but-ordinary human resources. He is especially successful at highlighting the harmonic individuality of countersubjects and secondary voices, something accomplished on the organ only with tremendous skill.

One of his great eighteen chorale preludes, Bach’s ​Francophile ​treatment of the five-stanza Reformation chorale 'An Wasserflüssen Babylon' (BWV 653), a piece set by a wide assortment of composers including Praetorius, Reincken, and Pachelbel, is an evocative response to the despondent text that likely dates from the last decade of the composer's life. In a sense, Bach’s music is truer to the text than many composers’ vocal settings of the chorale. The graceful sarabande in the French style is phrased by Mr. Fickley with an appealing air of ceremony, and the completeness of his understanding of Bach’s idiom is revealed by his delicate handling of the ritornelli and the tenor subject. The level-headed accuracy of the organist’s playing discloses the unparalleled ingenuity of the composer’s sometimes stunningly modern uses of harmony and modulations.

Likely an arrangement of a chamber work made by Bach for the educational benefit of his eldest son, Wilhelm Friedemann, the Trio Sonata No. 1 in E-flat Major (BWV 525) makes no allowances for a student’s weaknesses. This is music as difficult as any that Bach composed for any instrument or ensemble, and Mr. Fickley devotes unflagging energy to his playing of the Trio Sonata’s opening Allegro movement, the textures of the music managed so that the melodic figurations never disappear amidst the cascades of sound. The lovely Adagio is followed by another Allegro, its mood lighter but no less demanding than the first movement. In both the Adagio and the final Allegro, Mr. Fickley plays exceptionally well, his affection for the music apparent in his thoughtful handling of the interplay between chord progressions and the emotional moods of the piece.

Mr. Fickley’s performance of the Prelude and Fugue in A minor (BWV 543) is marked by an expansively-phrased account of the Prelude and an unflappable consistency in elucidating the contrapuntal writing in the Fugue with instinctive balancing of the subject as it passes from voice to voice. These qualities are also at the core of his playing of the Partite diverse sopra il corale ‘Sei gegrüsset, Jesu gütig’ (BWV 768), a lovely inspiration in which Bach’s singular gift for harmonizing popular chorale melodies is especially apparent. The composer’s mastery of the styles of his own and previous generations is evident in the Passacaglia in C minor (BWV 582), as well. In Mr. Fickley’s traversal of the Passacaglia, an unusual piece that is essentially a set of variations with a broadly-conceived fugue as the final variation, the majesty of the Schnitgerorgel rings out stirringly. As in the other selections on this disc, Mr. Fickley plays commandingly, performing in a manner that neglects neither the grandeur nor the individuality of the music.

Hearing a great organ in a space worthy of its sound is an experience like no other, and this first installment in Todd Fickley’s and MSR Classics Bach Project recreates that experience on compact disc as vibrantly as any recording has ever managed to do. Mr. Fickley is not a limelight-seeking organist like Virgil Fox: rather, he is clearly one whose scholarship and dedication equal his technique. In this recital of organ music by Bach, there is a rare intersection of great music, great instrument, and great player. Imagining Bach playing his own music as well as Todd Fickley plays it on this disc, is there any wonder that his contemporaries esteemed him most highly as an organist? When hearing musicality of this quality, one does not interrupt the player’s concentration to inquire about the provenance of a piece: one merely sits back, listens, and enjoys.