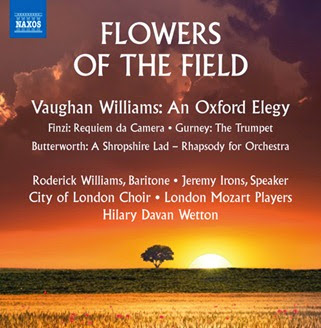 A century ago, as the desolation of ‘total war’ swept across Europe, destruction of life and land on an unprecedented, unimagined scale brought a continent and, in time, every nation in the world to the edge of a precipice from which retreat was impossible. From the brink of cataclysm, the view into the abyss of modern warfare shocked a world still coming to terms with industrialization and urbanization of contemporary society. One of the greatest tragedies of the Great War, which left swaths of the European population dead or destitute, is that the lessons of the ferocity and merciless carnage have seemingly been forgotten—or else were never truly learned at all. Now, when city streets are informal war zones and governments stand ready to initiate nuclear annihilation, the trenches of WWI are distant memories, and, with the veterans of those trenches departed, there are no voices to revitalize and honor those memories. Music is the immortal phoenix, however, and it can preserve for countless generations that which fades and falls from the minds of men. This new disc from NAXOS, Flowers of the Field, recorded in beautifully natural, spacious sound, takes the listener back to the trenches, to No Man’s Land, to the drawing rooms and kitchen tables of England, where families awaited news of their own soldiers and sailors. Art is in many ways the antithesis of war, but reactions to the complex, ambiguous sentiments of war-torn social orders have engendered some of the most extraordinary works of art in all genres. To the individual responses to WWI by four of England’s finest composers is owed the existence of the music on Flowers of the Field. Their perspectives were different, and it ironically was the oldest of the four composers represented on this disc who lived longest after the cessation of hostilities in 1918, but all of the music on Flowers of the Field provides intensely personal views of the horrors of what sadly did not prove to be the war to end all wars.

Under the insightfully-wielded baton of Hilary Davan Wetton, the London Mozart Players give a subtle, sonorous account of George Butterworth’s A Shropshire Lad – Rhapsody for Orchestra. The climax to which the music builds is achieved by Maestro Wetton with perfect control of thematic development. The Rhapsody’s principal melodic material, taken from Butterworth’s lyrical settings of poems from Housman’s A Shropshire Lad, provides a vein of solemn melancholy that courses through the music without concealing suggestions of optimism and memories of past happiness. The incandescent performance by the London Mozart Players and Maestro Wetton is a fitting tribute to the composer, who lost his life in the Battle of the Somme in 1916, less than a month after his thirty-first birthday.

Edited and completed by Christian Alexander, the score of Gerald Finzi’s Requiem da Camera is a sublime creation that delves deeply into the composer’s youthful idiom at its expressive best. The work’s Prelude receives from the London Mozart Players and Maestro Wetton a warmly affectionate reading, and the tranquility of their approach persists in each of the subsequent movements. Soprano Natasha Harbinson and tenor David Bagnall unite with the City of London Choir in a radiant account of Finzi’s setting of John Masefield’s ‘How still this quiet cornfield is to-night,’ their simple but serene singing exposing the raw emotions of the text. Thomas Hardy’s ‘Only a man harrowing clods’ received from Finzi a musical treatment of particular grace, and it is impossible to imagine the vocal lines served better than by baritone Roderick Williams in this performance. Whether premièring modern compositions or portraying familiar operatic characters like Marcello in Puccini’s La bohème, Mr. Williams is one of Britain’s finest singers, one whose many recordings are too few. He possesses a rare gift for looking at a piece of music and discerning its heart without over-analyzing, thus preserving the spontaneity of his interpretations whether he is singing a piece for the first or the hundredth time. That he also brings to his work a voice of extraordinary beauty and security only enlarges the effectiveness of his artistry. His singing of ‘Only a man harrowing clods’ is powerfully moving, both in its sheer tonal appeal and in the simplicity of utterance. ‘We who are left’ from Wilfrid Wilson Gibson’s ‘A Lament,’ published in 1918, is mesmerizingly performed by soprano Emily Tidbury soprano and the choir. The death of his mentor Ernest Farrar on the Western Front in 1918 deprived the seventeen-year-old Finzi, who had already lost his father and brothers, of one of the greatest influences on his development as a composer, and his sense of loss throbs in every bar of his Requiem da Camera and every moment of this performance.

Ivor Gurney survived WWI physically, but the lasting mental and emotion turmoil of his service undermined his psychological stability. One of England’s most gifted musicians thus spent the last fifteen years of his life in the confinement of an asylum, where he struggled to reclaim through Art what the terrors of war took from him. In The Trumpet, Gurney set an inspirational text by Edward Thomas, sung stirringly by the City of London Choir in this performance. Edited and orchestrated by Philip Lancaster, Gurney’s handling of ‘Rise up, rise up’ is realized with compelling magnitude by the London musicians and singers. The competing resignation and resilience of their collective phrasing of the lines ‘Open your eyes to the air / That has washed the eyes of the stars / Through all the dewy night: / Up with the light, / To the old wars; / Arise, arise!’ are unaffectedly profound.

Employing a text by Matthew Arnold, Ralph Vaughan Williams’s An Oxford Elegy is a work of the sort of contrasting public homage and private anguish at which the composer excelled. As in the other pieces on Flowers of the Field, the choristers, orchestra, and Maestro Wetton perform the music incisively, creating the impression that they are directly experiencing the incomprehensible losses of WWI rather than singing about them a century later. Though Vaughan Williams was in his forties when the war began, he enlisted, and his experiences on the Continent, combined with the later traumas of WWII, impacted his work for the rest of his life. The spoken portions of the Elegy are read by acclaimed thespian Jeremy Irons, whose mellifluous, immediately-identifiable voice lends Arnold’s verses a measure of glamor. There are drawbacks to Mr. Irons’s contributions, however, apparent from the start of his voicing of ‘Go, for they call you, Shepherd, from the hill.’ There and in ‘Here will I sit and wait,’ repeated by chorus, his phrasing and articulation can seem artificial, and his tone in ‘Come, let me read the oft-read tale again’ causes the text to seem just that—an oft-read tale that has been repeated to the verge of insignificance. His intoning of ‘Too quick despairer, wherefore wilt thou go?’ restores the expected integrity of his performance, however, and his delivery of the lines ‘There thou art gone, and me thou leavest here / Sole in these fields; yet will I not despair’—complemented by the chorus’s singing of ‘Yes, thou art gone! and round me too the night / In ever-nearing circle weaves her shade’ and the closing ‘Why faintest thou? I wander'd till I died’—carries vast dramatic weight. Vaughan Williams’s music gives Arnold’s text a canvas on which to paint the unfettered emotions of war in bold, ever-changing hues, and Mr. Irons, Maestro Wetton, and the singers and musicians collaborate in a presentation of An Oxford Elegy that both mourns the terrible costs of war and acknowledges the hope of the inevitable carrying on.

The body of George Butterworth was never identified or returned to England for burial among his ancestors, and that is a sorrowful reminder of the ways in which war disrupts families and societies for generations. When he fell in France in 1916, he perhaps could not have envisioned that, a century later, images of conflict would continue to haunt the citizens of the world nearly every single day. Vaughan Williams, who emerged from the deplorable savagery of WWI only to witness the atrocities of WWII, perhaps believed that the sacrifices of fathers and grandfathers would spare sons and grandsons the unspeakable pains of war. Ivor Gurney’s spirit was broken and Gerald Finzi’s childhood uprooted by the impersonal clashes of governments, but what these composers said in music is the legacy of World War One that must persevere: that every life mattered, every death left an empty seat at a dinner table, and every blood-soaked trench scarred the earth in ways that can never be healed. This disc and the sincere, heartfelt performances that it preserves rekindle the hope that every tear shed for the victims of WWI indeed gave life to flowers of the field.