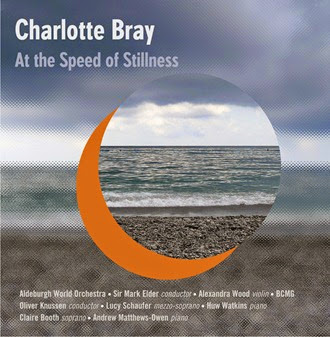 Those who proclaim that Classical Music is a dead or dying art cannot have heard the music of Charlotte Bray; nor can those who lament the demise of the Classical recording industry have heard the superb performances on NMC’s expertly-presented At the Speed of Stillness. From the inception of music, its foremost function has been to communicate passions too complex—and also too simple—for words, and the pieces on this disc reveal that Charlotte Bray understands this as profoundly as Monteverdi, Mozart, or Mahler. That she is a talented composer is confirmed by the originality and technical acumen that resound in every selection on At the Speed of Stillness: that she is an important composer is disclosed by the emotional vibrancy of this music. Conservatories can teach eager aspiring composers to string notes together effectively, but only an artist with a grasp of the aspects of composition that cannot be taught in lecture halls is ultimately capable of creating music that engages the listener’s imagination.

​The disc's 'title track,' Ms. Bray's 2012 ​At the Speed of Stillness, was inspired by a surrealist poem by Dora Maar, and the scintillating, ever-changing colors of the composer's orchestration are an apposite homage to a fellow artist's singular worldview. The ways in which Ms. Bray manipulates instrumental timbres to create unique blends of sounds are indicative of the work of a composer who is not merely thinking outside of the proverbial box: she is dismantling the box and listening closely to the sound patterns made as its component parts separate and interact with the environment around them. The sound world of At the Speed of Stillness is one of things only partially heard, like the specific words in a conversation just beyond the range of perception, but the taut infrastructure of the music builds a skeleton upon which the strands of melody grow and mutate arrestingly. Performed by the talented musicians of the Aldeburgh World Orchestra, At the Speed of Stillness teases and thrills the listener’s perceptions, creating expectations only to defy them. A proven master of many niches of operatic and symphonic repertories, Sir Mark Elder here proves to also possess a natural affinity for pacing Ms. Bray’s music. Whether by instinct or by close study, he and the Aldeburgh World Orchestra players are sensitive to the complexities of the score​, and their ​traversal of At the Speed of Stillness revels in the inherent ambiguities in Ms. Bray's thematic treatment.

Composed in 2013, Fire Burning in Snow is a sequence of settings of poems by Nicki Jackowska that reveal the fascinating depth of the composer’s response to the musicality of text. In this regard, Ms. Bray is not unlike Mahler, whose reactions to the Wunderhorn poems and Goethe’s Faust significantly influenced his work. Mezzo-soprano Lucy Schaufer is an ideal interpreter for these songs, both musically and histrionically, her clear diction enhancing the impact of her appropriately-scaled tone in Ms. Bray’s vocal lines. She is supported with inviolable conviction by the players of Birmingham Contemporary Music Group: Melinda Maxwell on oboe and cor anglais, Katherine Lacy on clarinet and bass clarinet, violinist Alexandra Wood, violist Christopher Yates, and cellist Ulrich Heinen. The bleakness of ‘Moonlight’ is imparted by Ms. Schaufer without heaviness, and she and the musicians get right at the heart of the enigmas of loss and carrying on explored in ‘Loose Ends.’ The enchantment of Ms. Bray’s subdued optimism in her setting of ‘Occupations’ works its magic via Ms. Schaufer’s beautifully direct singing. Ms. Bray obviously possesses a rare talent for creating music that expands the interpretive implications of text, and Ms. Schaufer’s performances shine light into every corner of these engrossing songs.

Pianist Huw Watkins makes his performance of Oneiroi a journey that is both universal and deeply personal. The technical faculty with which he plays the piece is partnered with smart negotiations of the restless moods of the music. Joined by the Birmingham Contemporary Music Group in the 2011 piano quartet Replay, Mr. Watkins furthers the positive impression made by his solo playing with interaction with his colleagues of compelling collaborative strength. Ms. Bray’s capacity for superlative songwriting is complemented by a gift for gracefully commanding the instrumental voices of chamber music. The layering of harmonies in Replay is stunningly handled, and Ms. Bray’s music invents new sonic concoctions that the players mix and serve with audible delight.

In terms of concentrated expressivity, the most enthralling performances on the disc are those of soprano Claire Booth and pianist Andrew Matthews-Owen. This pair of insightful musicians have formed one of the world’s most successful partnerships for the exploration of Twenty-First-Century Art Song repertory, and they lend their intelligence, commitment, and unbending musicality to five songs from Ms. Bray’s 2011 Yellow Leaves, a mesmerizing cycle utilizing poet Caroline Thomas's haikus based upon Shakespeare's Sonnets. Beginning with a lusciously-voiced account of the hypnotic ‘Still Standing,’ Ms. Booth shapes each of the songs with uncanny connection with the ethos of the text. The detached, almost conspiratorial quality of her tones in ‘Collusion’ is unnerving, and the competing despair and sly charm of ‘While the bell tolls...’ and ‘Farewell’ are given equal weight in Ms. Booth’s cunning, unexaggerated singing. Avoiding both cheap gimmickry and the trap of making concerted efforts at giving ‘Old Tales’ artificial context, the soprano captures with her crystalline timbre the disturbing uncertainty that lingers in the music. These songs are like mirrors that offer distorted reflections of both the performers’ and the listener’s interpretations, and the evolving visages of Ms. Booth’s musical portraits are luxuriously framed by Mr. Matthews-Owen’s elegant pianism. As in their performances of songs by Jonathan Dove, Ms. Booth and Mr. Matthews-Owen master Ms. Bray’s style not with force but with finesse, and the infrangible communication that they share with one another enables Ms. Bray’s songs to communicate directly with the listener.

Caught in Treetops is essentially a concerto for solo violin and orchestral ensemble, a work that shares with Benjamin Britten’s Violin Concerto a formidable degree of virtuosity and an expressivity that elevates the piece far above the level of a joint exercise of the composer’s and soloists’ egos. Alexandra Wood is again the violinist, and in the ranks of the Birmingham Contemporary Music Group Mr. Yates and Mr. Heinen are joined by Marie-Christine Zupancic on flute, alto flute, and piccolo, Victoria Brawn on oboe and cor anglais, Mark O'Brien on clarinet and bass clarinet, horn player Mark Phillips, trumpeter Jonathan Holland, trombonist Edward Jones, percussionist Julian Warburton, pianist Malcolm Wilson, and harpist Robert Johnston. Guided by the typically prescient conducting of Oliver Knussen, Ms. Wood’s playing perpetuates an environment of deep cooperation: this is not the sort of conversation between soloist and orchestra that occurs in a conventional concerto but an exchange of thematic development and tonal centers of gravity among all of the instruments. Still, Ms. Wood’s ravishing lines, never distorted by excessive vibrato, are the cornerstones of Caught in Treetops, and she is as inspiring a technician as she is a vessel of imagination. As in all of the works on this disc, contrasts are the prevailing quality in Caught in Treetops—rhythmic contrasts, the differences among instrumental timbres, and the disparities of complicated sentiments. Vitally, though, the quest to make music is never subjugated by either the composer or the performers to a desire to make effects.

From a technical perspective, NMC Recordings discs are reliable sources of industry-leading acoustical quality regardless of the provenances of the performances featured on any given release. Indeed, it seems that NMC’s engineers might record in Tube stations or airport terminals without compromising the impeccable standards of their results. Recording music by Charlotte Bray in the Underground or in a busy corridor at Heathrow would not be inappropriate. She is a composer on the move, as it were, and both the music on this disc and the performances that it inspires suggest that her ultimate destination is the zenith of the composition of serious music in the Twenty-First Century.