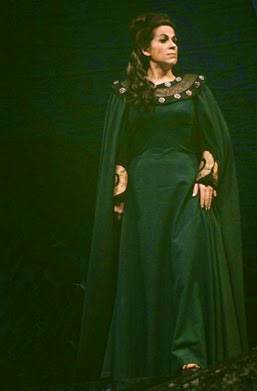 On 18 December 1959, Birgit Nilsson made her Metropolitan Opera début in a rôle that remains associated with her, the titular Irish princess in Wagner’s Tristan und Isolde. Ten days later, she reprised her Isolde in one of the most famous performances in MET history, the night on which the ravages of illness paired her with no fewer than three Tristans. The winter of 1960 – 1961 saw the MET débuts of Hermann Prey and Sir Georg Solti in Wagner’s Tannhäuser in December, the spectacular joint débuts of Leontyne Price and Franco Corelli in Verdi’s Il trovatore in January, and Ms. Price’s first MET Aida in February. In January 1962, the underappreciated Anita Välkki bowed as Brünnhilde in Die Walküre, followed in March 1964 by the first MET appearance of the equally undervalued Nicolae Herlea as Rodrigo in Don Carlo. In October 1966, Karl Böhm and a fantastic cast introduced MET audiences to Richard Strauss’s Die Frau ohne Schatten, and a highlight of the Spring 1967 Tour was the début in Boston of Elisabeth Grümmer as Elsa in Lohengrin. The 28 September 1968 performance of Cilèa’s Adriana Lecouvreur partnered Renata Tebaldi with a young tenor making his first journey across Lincoln Center Plaza from New York City Opera to the MET, Plácido Domingo. August Everding’s new production of Tristan und Isolde, uniting Ms. Nilsson’s Isolde with Jess Thomas’s Tristan, was one of the greatest triumphs of the 1971 – 1972 Season, and the artistic sensation of the 1976 MET Tour was Renata Scotto’s portrayal of the soprano heroines in Puccini’s Il trittico. The common denominator in these performances, the witness to all of these watershed moments in the history of the Metropolitan Opera, is mezzo-soprano Irene Dalis, one of America’s finest, most unforgettable singers. A thrilling creature of the stage whose artistry was matched by her humanity, Ms. Dalis’s legacy in American opera is one of integrity, humility, and dedication to making her own career one of unerring dignity and affectionately nurturing the careers of young singers.

Following an instructive tenure in German opera houses, Ms. Dalis made her own MET début as Eboli in Don Carlo on 16 March 1957, in a performance in which her colleagues were Jussi Björling, Delia Rigal, Ettore Bastianini, Cesare Siepi, and Hermann Uhde. Critic Raymond A. Erickson wrote in Musical America that she ‘met the exacting demands of the part of Eboli with such vocal and dramatic authority as to make her debut one of the most exciting in recent seasons.’ Her prowess in Verdi repertory was confirmed in subsequent seasons by the fact that neither her Azucena nor her Amneris was eclipsed by her high-wattage colleagues. The histrionic intensity of her Azucena and the nobility of her Amneris were combined in Ms. Dalis’s magnificently-sung Lady Macbeth, and she was a hair-raising but unfailingly musical Ulrica in Un ballo in maschera. In Verdi repertory, as Santuzza in Cavalleria rusticana, as the Principessa di Bouillon in Adriana Lecouvreur, and as the Zia Principessa in Suor Angelica, she was America’s only true rival for the incomparable Giulietta Simionato.

Though she brought an element of authentic Gallic hauteur to her characterization of the Principessa di Bouillon, Ms. Dalis’s only French rôle at the MET was the Biblical seductress in Saint-Saëns’s Samson et Dalila, but her expertise in Italian repertory was paralleled by her superb singing of German rôles. Brangäne in Tristan und Isolde was her fourth part at the MET, and her level of achievement was such that Birgit Nilsson, frequently her Isolde, regarded her not as a rival but as an equal. Whether her Brünnhilde was Nilsson, Välkki, Martha Mödl, or Margaret Harshaw, she was a commanding Fricka in Die Walküre and a compelling Waltraute in Götterdämmerung, as well as a powerful Fricka in Das Rheingold. She was an Ortrud and a Venus who could hold her own against the very different Elsas of Régine Crespin, Ingrid Bjoner, and Elisabeth Grümmer and Elisabeths of Victoria de los Ángeles and Leonie Rysanek. Ms. Dalis’s sole Klytämnestra in Richard Strauss’s Elektra was a tour performance in Atlanta, but her Herodias in Salome took New York by storm. The standard that she set with her singing of the Amme in Die Frau ohne Schatten has never been surpassed.

One of Ms. Dalis’s most memorable portrayals, Kundry in Parsifal, was heard at the MET only eight times, but she was the first American artist to sing the rôle at Bayreuth, where she appeared in Wieland Wagner’s controversial production of the opera in 1961, 1962, and 1963. Her performances in the 1962 Bayreuther Festspiele Parsifal were preserved on a recording that is embraced by many Wagnerians as one of the finest accounts of the troublesome opera. She also alternated with Astrid Varnay and Elisabeth Schärtel as Ortrud in the 1962 Bayreuth Lohengrin.

A native of San Jose, California, Ms. Dalis returned to her hometown after retiring from the MET stage, accepting a professorship and establishing an opera workshop program at her alma mater, San Jose State University. Recalling her own experiences as a young singer with German regional companies, she founded Opera San Jose in 1984, focusing on cultivating a true repertory company in the now-rare traditional sense. The launching of her Vocal Competition in 2007 furthered her aim of supporting and encouraging young singers and working towards the broadening of opera’s appeal in the United States.

Irene Dalis is one of many great singers whose voices I sadly know only from recordings, but her recordings offer evidence of a truly sublime talent. In truth, if her discography were confined only to the 1962 Bayreuth Parsifal, her reputation as a Wagnerian of legendary status would be assured. Thankfully, many of her MET broadcasts are in circulation in unofficial channels, and none is more impressive than the 1971 Die Frau ohne Schatten in which her Amme nearly steals the laurels from Leonie Rysanek’s typically resplendent Kaiserin, Christa Ludwig’s inspiring Färberin, and Walter Berry’s moving Barak. When I want to surrender myself completely to this fantastic singer’s beautiful tones and emotional directness, however, I turn to the 1962 broadcast of Cavalleria rusticana. To the New York operagoer of that era, the performance must have seemed unexceptional, with Ms. Dalis surrounded by Barry Morell’s Turiddu, Rosalind Elias’s Lola, Walter Cassel’s Alfio, and Lili Chookasian’s Mamma Lucia, and it is not a performance that redefines the opera or its impact. Still, it is a performance that possesses legitimate impact, and the source of that energy—a palpable electricity that, after fifty-two years, is undiminished—is the unique Irene Dalis. 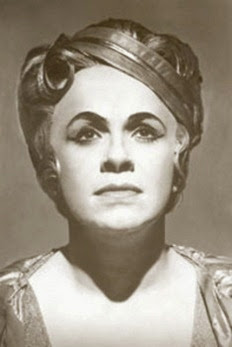