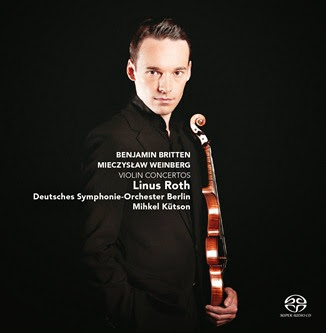 When writing about music, I am ever mindful of the words of Great War poet Robert Graves, published in his Fairies and Fusiliers: ‘Critic wears no smile of fun, / Speaks no word of blame nor praise, / Counts our kisses one by one, / Notes each gesture, every phrase.’ For me, Graves’s words are an ideal blueprint of how not to be a critic, for if I am not permitted to wear a ‘smile of fun’ whilst listening to the endeavors of an accomplished musician and then attempting to translate that sensation into words of praise it is not a worthwhile task. What makes certain artists and their work unique is their ability to transform a listener’s perceptions of a work of art, a fellow artist, or some facet of art itself. The performance by young violinist Linus Roth, the Deutsches Symphonie-Orchester Berlin, and conductor Mihkel Kütson on Challenge Classics—magnificently committed to disc by the technical team of executive producers Anne de Jong and Marcel van den Broek, audio engineer Steven Maes, assistant engineer Sander Van Laere, and musical director Felicia Bockstael—was not my first acquaintance with Mieczysław Weinberg’s 1959 Opus 67 Violin Concerto, but it immediately changed not only my opinion of the Concerto but also greatly increased my esteem for the composer’s music in general. Most excitingly, noting ‘each gesture, every phrase’ of Mr. Roth’s playing, I deepened my acquaintance with one of the new century’s most inspiring violinists.

Born in Warsaw in 1919, Weinberg was the son of a family that maintained a prominent presence in the Yiddish theatres of Poland. Taking refuge in the Soviet Union as the destruction of World War II spread across​ Europe, the young composer lost much of his family to pogroms and death camps. Weinberg’s paths as a man and a composer were never to be easy, but his friendship with Dmitri Shostakovich was a defining influence in his life. Befriending the older composer gave him confidence both in his craft and in the value of his artistic vision, but stating that Shostakovich inspired and guided Weinberg is not to suggest ​that the latter’s originality was in any way lessened by exposure to his Russian colleague’s work. In fact, it was likely his interaction with Weinberg that prompted Shostakovich’s great interest in Jewish music in the latter half of his career. Without the intervention of Shostakovich, however, much of Weinberg’s music might have been lost or never composed at all. Whatever factors contributed to Weinberg’s artistic and personal resilience, hearing Mr. Roth’s playing of the Violin Concerto caused this listener to feel tremendously grateful for them.

Composed for Ukrainian violinist Leonid Kogan​, who shared the composer’s Jewish heritage, Weinberg’s Violin Concerto is a superbly-crafted piece that should be in the repertory of every violinist with sufficient technique to play it. Mr. Roth, who recently gave the first performance of the Concerto in his native Germany, might well have been the violinist for whom Weinberg conceived the work, so natural is his mastery of the music. His virtuosity is staggering, of course, but the true brilliance of his playing of Weinberg’s music is in his phrasing. Aided by the exceptionally responsive collaboration of Maestro Kütson and the Deutsches Symphonie-Orchester Berlin, Mr. Roth identifies and accentuates every melodic component of the opening Allegro molto movement, revealing the cleverness of Weinberg’s Classically-shaped but innovative thematic development. The boldness of the solo part receives from Mr. Roth warm-blooded treatment, both here and in the subsequent Allegretto and Allegro risoluto movements, in which the motivic links among the movements are tellingly explored. The violinist’s bowing is uncannily sensitive to the expressive as well as the technical demands of the music, and he exhibits sensibilities that bring to mind the luscious tones of Arthur Grumiaux and the poetic expression of Henryk Szeryng. The Adagio third movement is given a sense of wide-eyed wonder by Mr. Roth’s accurate, unexaggerated playing. This is the sort of music in which any manner of egotistical ‘interpretations’ might be cited as excuses for idiosyncratic playing, but Mr. Roth and Maestro Kütson derive the details of their performance solely from the score. Drawing from the ‘Dancla’ Stradivari—dated to 1703 and once owned by the French violinist and composer from whom it takes its epithet—in his hands sounds of both strength and tenderness, Mr. Roth lends the Weinberg Concerto an unmistakable air of novelty. That this performance caused me to feel as though I was hearing the Concerto for the first time is a testament both to the sagacity of violinist and conductor and to the quality of the music itself, revealed here as never before.

A far more familiar work, Benjamin Britten’s Opus 15​ Violin Concerto was composed in 1938 and 1939, after its creator’s arrival in the United States, and was premièred by Spanish violinist Antonio Brosa with Sir John Barbirolli and the New York Philharmonic at Carnegie Hall in 1940. Though a relatively early work, the Concerto remains one of the most frequently-played solo concerti of the Twentieth Century and a work by which Britten’s legacy is defined for many concert-goers. It is a fine piece, one that deserves its popularity, but it is not consistently representative of Britten at his best. Structurally, the Concerto is very much of its time, the touch of Prokofiev felt throughout, and Britten’s restless grappling with tonality has not yet achieved the individuality that it would assume in his later, gamelan-influenced instrumental music. Still, it is a rewarding, often powerful work, and Mr. Roth and his colleagues extract from the tonal subtleties of the opening​ Moderato con moto movement a compelling essence of Britten’s musical ambiguity. This is the sort of music that entices many violinists into embarrassing sawing, but Mr. Roth maintains an invigorating finesse that reveals the fluidity of even the most angular melodic lines. This is especially true in the Vivace second movement, in which Mr. Roth’s playing of the celebrated cadenza is incredible. The variations over ground bass in the closing Passacaglia​ movement evoke the music of Britten’s beloved forebear Purcell, but the shifting tonalities firmly center the work in the Twentieth-Century avant garde. Maestro Kütson and the DSO Berlin musicians retain a significant degree of spontaneity in their realization of the evolving ground bass, and Mr. Roth complements their efforts with playing that combines lightness of touch with robustness of tone. The emotional uncertainty in Britten’s music is exposed without being over-emphasized. Above all, Mr. Roth audibly embraces the Britten Concerto as a work to be respected, studied, and absorbed rather than merely ticked off as an addition to his repertory.

Like today’s young singers, violinists can hardly fashion lasting careers in the Twenty-First Century by specializing in particular niches of their instrument’s repertory, but the requisite versatility that facilitates a successful international career often occasions stylistically unspecific, complacent playing. Linus Roth is too insightful and caring a violinist to accept anything from himself but the best musicianship of which he is capable. In this recording of the Violin Concerti of Benjamin Britten and Mieczysław Weinberg, he confirms that this music can be as effective in performance as the frequently-played concerti of Bach, Mozart, Beethoven, and Mendelssohn. His example will hopefully lead to wider exposure for the Weinberg Concerto, but, in practical terms, the performance on this disc is unlikely to be challenged as the definitive interpretation of this marvelous score. How could anyone, critic or not, hear this disc without wearing a ‘smile of fun’?