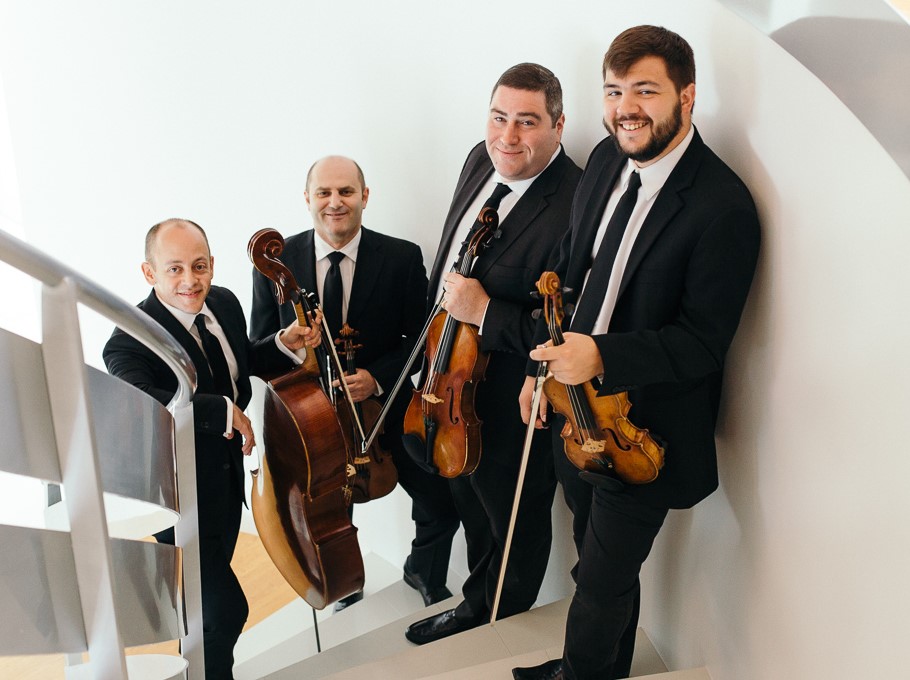 Perhaps no other composer of Classical Music has equalled the comprehensive mastery of form achieved by Wolfgang Amadeus Mozart. In a life that was brief even by the standards of his time, Mozart applied his genius to virtually every musical genre then in existence, drawing inspiration from Baroque masters and contemporaries including the Haydns, Mysliveček, and Salieri and transforming this artistic inheritance via new modes of expression. More than two centuries after his death, Mozart’s music resounds in concert halls, recital rooms, opera houses, cinemas, and private homes throughout the world, not as pedantic homage to a legendary artist but as exploration of still-undiscovered nuances of his artistry.

Composed during a period spanning eighteen years, from the month in which he celebrated his seventeenth birthday to eight months before his death, Mozart’s six quintets for two violins, two violas, and cello occupy seminal positions both in the composer’s output and in the evolution of chamber music from Baroque trio sonatas to modern works for diverse combinations of instruments. Building upon the foundations of Joseph Haydn’s enterprising string quartets, Mozart linked the Eighteenth and Nineteenth Centuries with his quintets. In these works, the contrapuntal intricacy and near-mathematical precision of Johann Sebastian Bach’s part writing intersect with harbingers of Beethoven’s expressive intensity, Schumann’s poignant Romanticism, and Brahms’s ambiguous formality. The best performances of Mozart’s quintets are those in which past and future audibly meet within the confines of Mozart’s singularly sophisticated Classicism.

Joined in this performance by acclaimed violist and Burlington native Chauncey Patterson, a product of the string program instituted in Alamance County schools by Dr. Malvin Artley, the renowned Amernet String Quartet players—violinists Misha Vitenson and Franz Felkl, violist Michael Klotz, and cellist Jason Calloway—brought a programme comprised of three of Mozart’s quintets to Elon University’s intimate Whitley Auditorium. In their playing of these pieces in this space, the musicians explored the subtleties of the quintets with an extraordinary degree of clarity. The resonance of the room occasionally obscured individual pitches in fast-moving, ornamented, and slurred passages, but the accuracy of their playing in other passages confirmed the inviolable certainty of the musicians’ intonation.

The quintet’s ensemble playing was remarkable, but the resonance of each individual’s distinctive timbre was no less impressive. A musical aristocrat among equals, Patterson’s sound was strikingly rich and beautiful. Calloway’s sonorous pizzicati punctuated the phrases in which they were deployed with unmistakable dramatic significance. The aural patinas of both violins and Klotz’s viola combined brightness with darker undertones in a manner that accentuated the interplay of light and shadow in the music. The acoustics of large halls are not necessarily unsuited to chamber music, but this performance demonstrated that hearing music like Mozart’s quintets in a space of relative equivalence to that in which it was originally intended to be heard can be revelatory.

Dating from 1787, the C minor Quintet (K. 406/516b) with which the performance began is Mozart’s own adaptation of his earlier K. 388 Serenade for wind octet. The opening Allegro movement was played with expansive phrasing and a palpable sense of conversation among the parts. The quintet offered a serene account of the deceptively uncomplicated Andante, navigating the music’s modulations like a captain piloting a vessel through canal locks. Arriving in the open waters of the Menuetto, the musicians pursued a course of firm adherence to the dance rhythm that never impeded rhapsodic expressivity. The ‘Trio in canone al rovescio’ is unique in Mozart’s chamber music, in both form and temperament: the emotional ambivalence of the shifting moods of the music was limned by the seamless handling of the intertwining melodic line. The concluding Allegro evokes the grandeur of a symphonic finale, anticipating the symphonies of Schubert and Mahler, and this performance was characterized by an enchanting realization of the music’s contrasting introspection and angst.

The D major Quintet (K. 593) was completed in 1790, the year that also witnessed the composition of Mozart’s exquisite twenty-second and twenty-third String Quartets (K. 589 and 590). This devotion of his creative energy to chamber works yielded some of his most profound, perhaps autobiographical music, epitomized by the discourse among the instruments in K. 593. In their performance, these five musicians lent the first movement’s metamorphosis from Larghetto to Allegro particular gravitas, the lightening hues of the music suggesting a triumph over hardship. Modern listeners are often tempted to attribute psychological meanings far more convoluted than Mozart likely conceived to his slow movements, but the Adagio in K. 593 withstands post-Freudian analysis. Amernet’s playing imposed no extrapolated sentiments upon the music, instead allowing the audience to interpret Mozart’s musical ideas on their own terms. In this Quintet, too, the terpsichorean essence of the Menuetto and Trio was delightfully prominent in the musicians’ performance. Confusion about the emblematic descending chromatic figuration in the final Allegro persisted for many years owing to a corruption of the passage having appeared in an early printing of the Quintet, but Amernet’s playing exuded technical and interpretive assurance.

Like K. 406/516b, the Quintet in G minor (K. 516) was composed in 1787. G minor is a key used sparingly and with emotional specificity by Mozart: of his forty-one symphonies, only the Twenty-Fifth and Fortieth—two of his finest and best-loved symphonies—are in G minor. The brooding passion of the G-minor symphonies also permeates K. 516 and billowed from Amernet’s playing with volcanic force. The turbulent argument of the Allegro drew electrifying playing from the musicians, and the charge was sustained in the allegretto Menuetto. The sunny G major of the trio, blithely played, momentarily dispersed the ominous clouds that oppress the soul of the Quintet. Tchaikovsky, whose adoration of Mozart is apparent in his own music, expressed special admiration for the doleful candor of the G-minor Quintet’s Adagio ma non troppo movement. Amernet’s performance of this elegiac music communicated its tragic subtext without sacrificing momentum to unwarranted heaviness. The enigmatic Adagio introduction of the Quintet’s finale, again prefiguring Mahler’s whimsical manipulation of sonata form, was sensitively played. The impact of the culminating Allegro was therefore markedly heightened. Mozart’s decision to resolve this foreboding Quintet with music of impish jocularity has been criticized, but the dizzying virtuosity of Amernet’s playing validated the sagacity of Mozart’s inventiveness.

Few things imperil the health of art more direly than unquestioning acceptance of an artist’s reputed greatness. That Joseph Haydn declared Mozart to be the finest composer with whose work he was acquainted is indicative of the respect that Mozart garnered, but the accomplishments of many ordinary people have been exaggerated by well-meaning praise. His music affirms that Mozart was no ordinary person, but too many performers seemingly believe that they, rather than the music, bear the responsibility of perpetuating the composer’s genius. The music says all that needs to be said, however, and Amernet String Quartet’s majestic performances of three of Mozart’s string quintets enabled the music to speak with accents as vibrant and relevant now as when Mozart devised them.

On a personal note, I thank Mr. Patterson and his Amernet String Quartet colleagues for dedicating their performance of K. 516 to the memory of Dr. Artley (1921 – 2017), whose vision, dedication, and indefatigable work ethic were devoted to fostering and advocating for the string orchestra program in Alamance County schools. Like Mr. Patterson, I am an alumnus of the Alamance-Burlington School System orchestra program. Without exposure to the work of Dr. and Mrs. Artley and the encouragement and tutelage of my orchestra teacher, Nancy Jones, I may never have experienced Classical Music and enjoyed the friendships that my love for music has engendered.