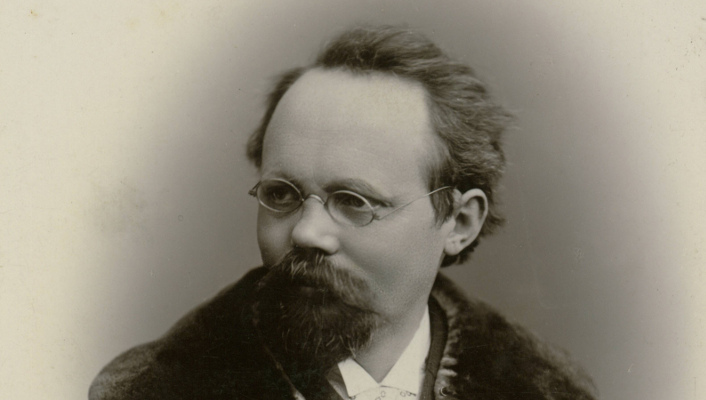 It is said that anything worth doing is worth doing well. In the case of Greensboro Opera’s production of Engelbert Humperdinck’s Hänsel und Gretel, first seen in the Pauline Theater in High Point University’s Hayworth Fine Arts Center [reviewed here], something done so well was worth doing again. Transferred to the recently-built theater in Greensboro’s Well•Spring community, not by a witch’s sorcery but by the hard work of a team dedicated to increasing the vitality of opera in the Triad, the production exerted its magic in the new space with the warmth and piquancy of fresh-from-the-oven gingerbread.

Produced and directed by the company’s General and Artistic Director David Holley, Greensboro Opera’s Hänsel und Gretel successfully allied the coruscating music of Humperdinck’s setting of his sister’s adaptation of the familiar Brüder Grimm tale with modern technological innovation in the form of Brad Lambert’s picturesque scenic projections. Owing to the theater’s open design, Jeff Neubauer’s lighting designs found a more congenial space in which to shine, illuminating the production’s participants and their actions with intelligibility. Only someone with no experience in performing opera could think that ensuring that singers are were they are supposed to be, both on stage and in the progression of the drama, is a simple task, but Holley’s direction and Christian Blackburn’s stage management created that illusion, recounting the opera’s story with fast-moving continuity.

Garrett Saake, Well•Spring’s Director of Resident Relations and Programs, brought a scholar’s concentration and a consummate entertainer’s flair to his conducting of the performance. [Anyone who values American vocal music should read Saake’s insightful dissertation on the too-little-remembered Irving Fine’s choral music for female voices.] As in High Point, he was notably successful in overcoming the challenges of minor lapses in ensemble and the small instrumental ensemble, retaining a firm grasp on the score’s innate momentum and achieving emotional catharsis without the benefit of the late-Romantic orchestra for which Humperdinck wrote. Now more comfortable with their parts, the musicians played confidently, individually and collectively. Particularly in the Hexenritt and the Traumpantomime, the orchestra should be an eighth character in the opera and, comprised of only seven players, could not quite manage that in this performance, but Saake paced the performance with such ardor that moments that perceptibly lacked orchestral power were surprisingly few and fleeting.

The children who preceded Hänsel and Gretel into the Knusperhexe’s clutches were endearingly portrayed by High Point University students and Greensboro Youth Chorus members, singing sweetly even when freed from their sugary captivity, and the dancers who represented the angels dispatched from heaven to watch over the stranded youths were figuratively and literally en pointe. Sopranos Jordan Winslow and Amber Rose Romero again donned the Sandmännchen’s and Taumännchen’s imaginative costumes and voiced their music with appealing tones and bountiful charm. Winslow dispensed reassurance as handily as sand, her serene demeanor and vocal fluidity enveloping Hänsel, Gretel, and the audience with a sense that, the predicament in which the adventurous siblings found themselves notwithstanding, all would be well. Romero sang with increased ease at the bottom of the range, projecting the sort of untroubled management of the tessitura that the bringer of dew might be expected to wield. 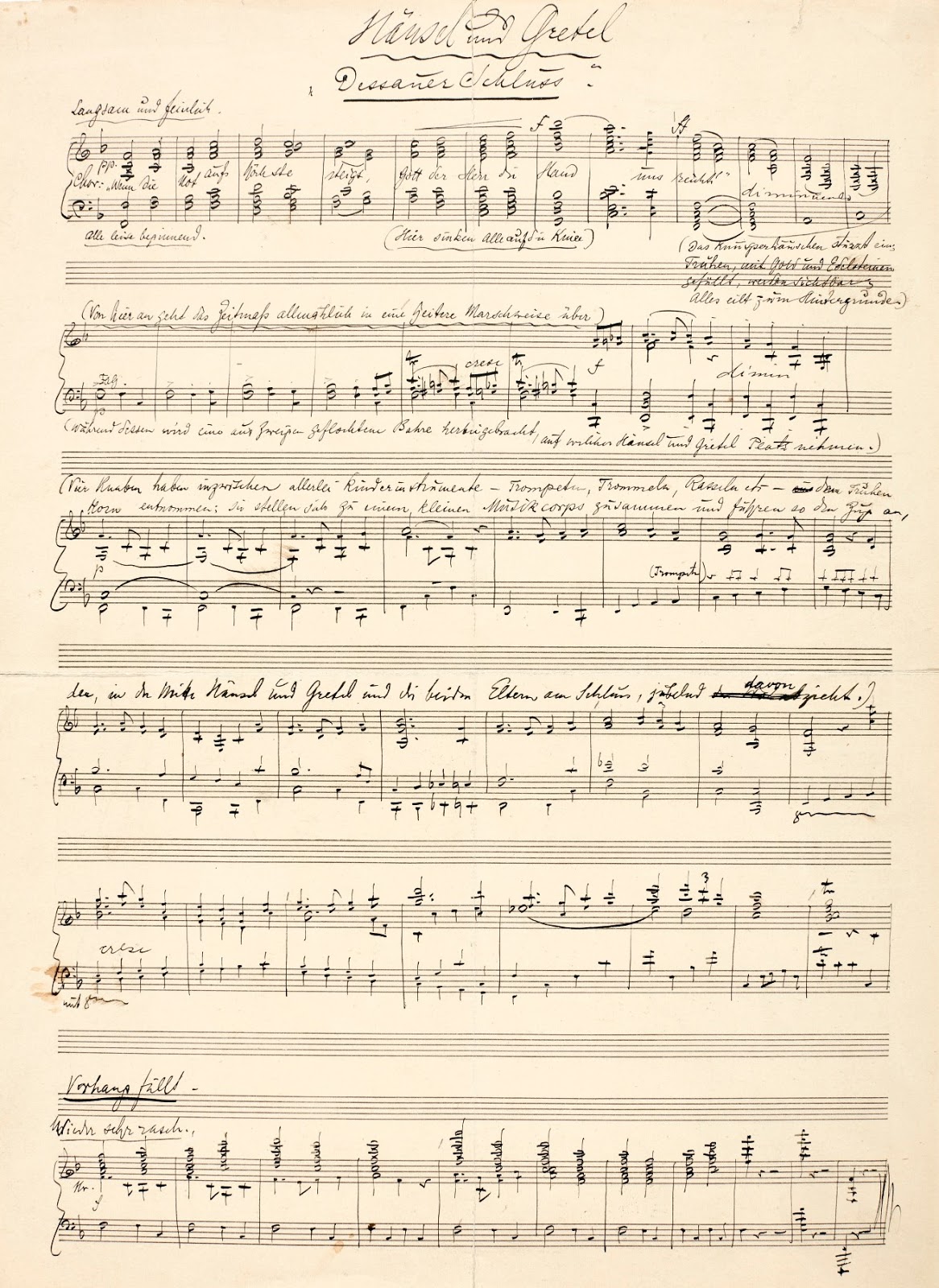 Humperdinck by hand: a page from the autograph score of Engelbert Humperdinck’s Hänsel und Gretel, showing the alternate ending composed for an 1894 production in Dessau
[Image from the Sotheby’s collection]

Also reprising the rôles that they sang in the High Point performances were soprano Lyndsey Swann and mezzo-soprano Gretchen Krupp. Experience in the part deepened Swann’s depiction of Gertrud, Hänsel’s and Gretel’s mother, heightening her response to the feelings of guilt and inadequacy that push her to the brink of contemplating suicide. Adept in the High Point performance at imparting the put-upon mother’s exasperation, she enriched her characterization in Greensboro by also revealing the profound sadness and fear with which Gertrud contends, not least by sharpening her focus on the text. Her top B was splendid in the opening-night performance: in this final show, it was genuinely seismic. There was greater malevolent elation in Krupp’s Knusperhexe in Greensboro than in High Point: in the intervening week, she clearly cultivated an appetite for gingerbread children. As before, the voice was a marvel, a veritable avalanche of centered, accurately-pitched tones.

In this Well•Spring performance, the rôle of the family patriarch Peter was sung by baritone Jacob Kato, who during and since his time at UNCG has been a frequent and welcome presence in opera in central North Carolina (he will also be North Carolina Opera’s Spoletta in that company’s April 2019 production of Puccini’s Tosca). As Humperdinck’s Peter, he was nimble of voice and body, creating a character who was both noble and a bit naughty. There was little doubt that this amiable fellow had seen the interiors of most of the nearby taverns, but there was also no doubting the vastness of his love for his family. Not even the most fervid admirer of Humperdinck’s art could honestly deny that Peter’s music is awkwardly written, requiring attention above and below the stave that can rob the voice’s central core of focus. Kato was happier at the top of the compass than at the bottom, but he eschewed the shouting often heard in the part. There are few opportunities for lyricism in Peter’s music, but this singer’s declamation exuded paternal tenderness. Kato was a Vater of whom his Kinder and the composer could be proud.

Like Swann, mezzo-soprano Emily Wolber participated in UNCG Opera Theatre’s 2016 production of Francis Poulenc’s Dialogues des Carmélites, in which her harrowing performance as the Carmelite community’s old prioress, Madame de Croissy, disclosed a noteworthy talent for conveying tragedy without artifice. Hänsel could hardly be more different, musically and dramatically, but Wolber’s portrayal of the lad unveiled another valuable facet of her artistry. Convincingly boyish without overdoing the puerile shenanigans, her Hänsel was a disobedient but loyal son and a teasing but devoted brother. Vocally, the rôle was an excellent fit for Wolber. Her vocalism was reliably audible and dexterous. There were a few passages in which the mezzo-soprano’s intonation was slightly compromised, her pitch veering flat, but she recovered rapidly and capably. She seemed to be exercising caution in the upper register, suggesting that she was not feeling at her absolute best. Still, this expressive singer was a wholly enjoyable, unfailingly musical Hänsel.

Wolber’s ebullient Hänsel had a perfect foil in the frolicsome Gretel of soprano Lilla Keith. A willing partner in her brother’s escapades, this Gretel visibly relished her mischief, crisscrossing the stage with a gymnast’s agility. The voice was scarcely less pliable, mostly executing intricate writing with precision. Keith’s timbre was lovely throughout the range of the music, especially in the Abendsegen, which she and Wolber sang with an earnestness that eludes many exponents of these rôles. The soprano’s upper register had a polished-silver gleam but occasionally sounded forced: her top D in Act Three was solid but faintly tense. Keith gave Gretel her own unique identity, limning the girl’s distinct personality rather than portraying her as merely one half of a pair. Most importantly, Keith and Wolber joined their colleagues in the production’s previous performances in making Gretel and her brother absorbing figures whose fate mattered to the audience who spent two hours with them.

Owing to its fairy-tale subject and origins as a holiday diversion for young people, Hänsel und Gretel will likely always be regarded by most opera lovers as a children’s piece. The abiding joy of Greensboro Opera’s production of Humperdinck’s opera was that, though it unmistakably appealed to young eyes and ears, it avoided the stigma of opera for children. Things that were youthful delights may become guilty pleasures when experienced via bifocals and hearing aids, but laughter and tears are ageless. Opera should remind audiences of this, and that is precisely what Greensboro Opera’s Hänsel und Gretel did so well.