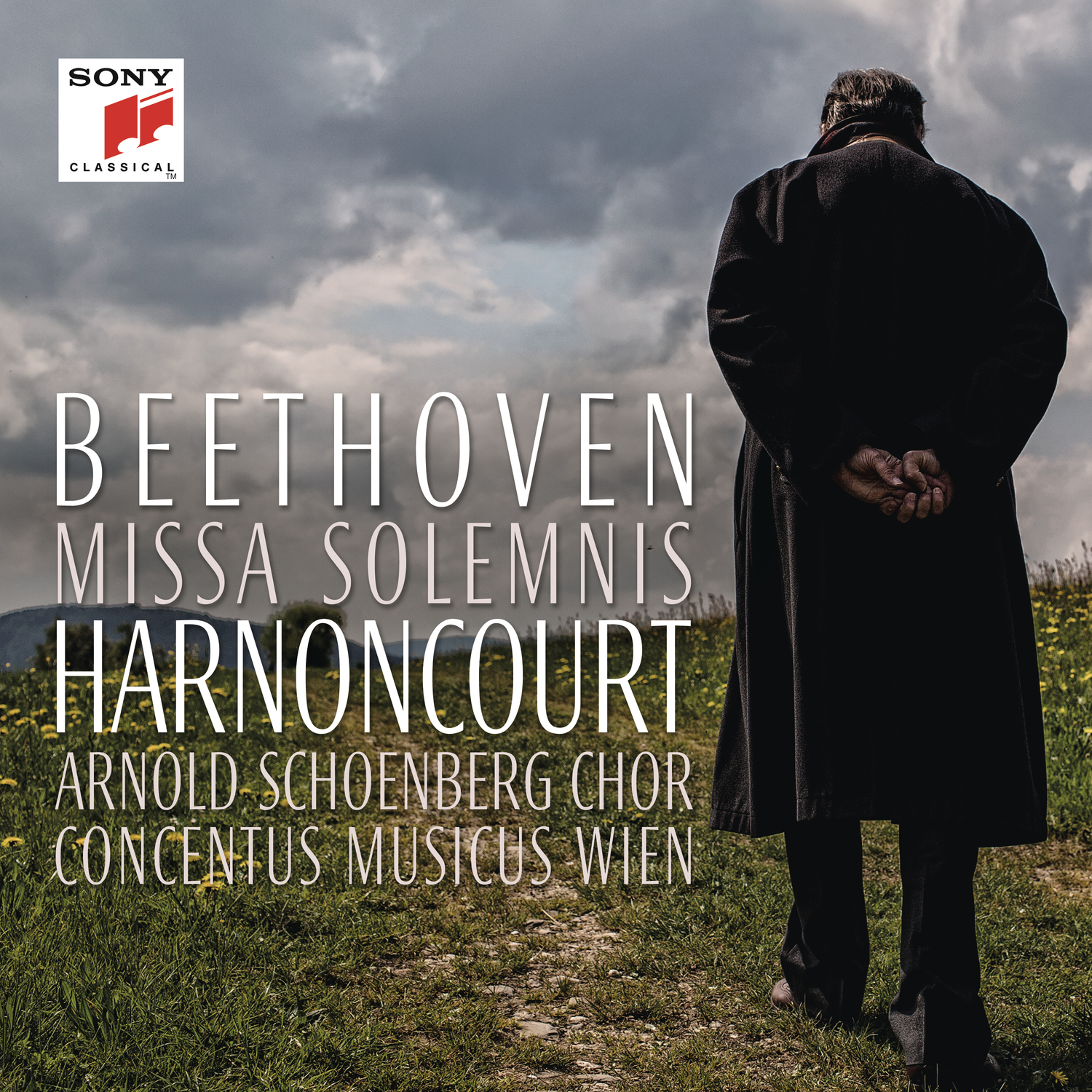 In an era in which humanity hides behind handles and ideas are expressed with hashtags, the intrinsic, enduring value of Art and the sacrifices that artists make in furthering it can seem dangerously undermined, even futile. The technological distractions of the Twenty-First Century were not so much as envisioned when Emily Dickinson wrote that ‘The Soul should always stand ajar / That if the Heaven inquire / He will not be obliged to wait / Or shy of troubling Her.’ Regarded as awkwardly introverted and misanthropic during her fifty-five years on earth, Dickinson’s long-suppressed and misguidedly-edited poetry have with every new technological advance revealed her to have been a stunningly intuitive prophetess of the modern age. In a musical career spanning more than six decades, Austrian conductor Nikolaus Harnoncourt demonstrated the prudence of Dickinson’s words. Throughout his career, in approaching the music of Ludwig van Beethoven Harnoncourt endeavored always both to open his own soul and to inspire the musicians with whom he worked to open their souls not only to the music itself but also to understanding its context and unexplored ways of performing it. Recorded during performances at the 2015 styriarte Festival that constituted Harnoncourt’s final appearance at the festival founded in 1985 to capitalize on the bond linking the conductor and his home city, this performance of Beethoven’s Missa solemnis is the culmination of nearly three decades of experience and a lifetime of intensive study and preparation. Remarkably, though, this performance sounds not studied but eruditely extemporaneous.

Harnoncourt first conducted Beethoven’s colossal Missa solemnis in 1988, and he returned to the score infrequently but always with renewed dedication in the subsequent twenty-eight years of his life. The 2015 interview reprinted in the liner notes that accompany this Sony Classical recording highlights the very personal nature of Harnoncourt’s interaction with the score. There were instances in the conductor’s career in which his unique modus operandi yielded pedantry that deprived his performances of some pieces of qualities vital to their composers’ intentions. In the specific realm of Beethoven’s Missa solemnis, however, Harnoncourt was mindful of the fact that every aspect of a performance of the work cannot be controlled by a conductor, no matter how complete his mastery of the score. In this performance, Harnoncourt’s scrutiny of every tempo [as author Monika Mertl asserts in her liner notes for this recording, Beethoven requested as many different tempi in the eighty or so minutes of his Missa solemnis as Mozart included in the 180 minutes of any of his da Ponte operas], dynamic marking, and detail of orchestration produces a reading that surprises, enlightens, and moves, every eccentricity—and, in comparison with other recorded performances, there are undeniable eccentricities—drawing the listener nearer to Beethoven; nearer, perhaps, than any human ears have been since the composer’s death in 1827.

Presiding over his Concentus Musicus Wien, the ensemble that he and his wife Alice founded in 1953, and the fifty-six voices of the Arnold Schoenberg Chor, Harnoncourt conducts a Missa solemnis notable not just for novelty but also for an abiding sense of emotional honesty that many performances of the score lack. Rarely on commercial recordings has the work’s significance as a musical point of intersection been more apparent. In the anguished cries for mercy in the opening Kyrie eleison, the churning first pages of Bach’s Matthäus-Passion echo through Beethoven’s music, and the monumental exultations of Händel’s Joshua and Judas Maccabaeus peal in the fugues of the Gloria and Credo. Mozart’s Große-Messe and Haydn’s Paukenmesse are present in Beethoven’s Sanctus and Agnus Dei, but so, too, are Mendelssohn’s Elijah, Brahms’s Ein Deutsches Requiem, the Masses of Anton Bruckner, Act Three of Wagner’s Parsifal, Elgar’s The Kingdom, Mahler’s Resurrection Symphony, and Britten’s War Requiem. Harnoncourt’s tempi, uniformly expansive [this performance runs for 81:34: representative performances conducted by the reliably unhurried Otto Klemperer (1965 EMI/Angel studio recording) and the mercurial Bruno Walter (1948 Carnegie Hall performance) have respective durations of 79:31 and 77:11], enable the musicians to neglect nothing and the listener to hear details of scoring obscured in almost all other recorded performances. In particular, the inventiveness and incredible difficulty of Beethoven’s writing for winds is poignantly revealed, and the expressive goals of the punishing, sometimes virtually instrumental use—abuse, some choristers might contend—of the chorus are stirringly realized.

As shepherded by Harnoncourt in this performance, the awestruck, almost hesitant supplication of the Kyrie gives way to the guarded but resilient optimism of the Gloria. In his shaping of the Credo, Harnoncourt builds momentum in what is often the least-interesting portion of the Missa, the fleeting, a cappella ‘Et resurrexit’ emerging as bizarrely cathartic. Espousing the theory that the omission of an indication that the chorus should join in the fugue on ‘Pleni sunt coeli’ in the Sanctus was intentional, Harnoncourt here entrusts the passage to the soloists, who deliver it convincingly. Presumably played by Concentus Musicus Wien’s leader Erich Höbarth [this is not specified in the liner notes], the violin solo that meanders through the Benedictus and its exquisite Præludium at first seems disappointingly anemic, but it rapidly becomes clear that this is a well-considered component of Harnoncourt’s interpretation: in this mystical, mysterious Missa, the redeeming Holy Spirit is an elusive entity, an absolving force that must be sought, not merely invoked. The observance of Providential clemency in the Agnus Dei is here mournful, even remorseful, rather than celebratory, prefacing a Dona nobis pacem in which the longing for peace is shaped by weariness and desolation. Throughout the music’s dramatic shifts of mood, both the orchestra and the chorus rise fervently and with unflappable musicality to every climax. More than almost any other performance in the work’s discography, though, this is a Missa solemnis of introspection and contrition. The grandiose moments excite, but the moments of quiet contemplation transfix.

Harnoncourt was tremendously fortunate in Graz to have in American soprano Laura Aikin, Argentine mezzo-soprano Bernarda Fink, Austrian tenor Johannes Chum, and Swiss-born bass-baritone Ruben Drole a quartet of soloists both willing to come to Missa solemnis with open minds and capable of fulfilling his and Beethoven’s demands. Chum launches the Kyrie handsomely, his slender tones projected with thrust sufficient to remain audible above the swells of orchestral sound. His phrasing is unfailingly elegant, and the suggestion of vulnerability in the voice makes his singing in the Benedictus, Agnus Dei, and Dona nobis pacem touchingly effective. Fink sings the alto lines superbly, her voice on wonderful form and her trademark nobility of utterance audible in every note that she sings. Aikin’s performance of the soprano part is so confident as to almost sound effortless, but this is not music that is conquered without toil. Nonetheless, Aikin possesses every necessary quality, providing a beacon of properly-weighted tone and perfect intonation for her colleagues in contrapuntal passages and rising without strain to a radiant top C in the Benedictus. In the exposed opening bars of the Agnus Dei, Drole’s lack of resonance in the bottom octave of the voice is more detrimental than elsewhere in the Missa, but he is an imaginative singer who draws strength from Harnoncourt’s vision of the mass’s final minutes as a desperate plea for concord rather than a jubilant paean to peace attained. It is with no malice towards singers, who are only human, after all, that it must be admitted that soloists are the principal drawbacks in many performances and recordings of Missa solemnis. Though only Aikin and Fink are genuinely outstanding individually, Harnoncourt’s styriarte soloists are an uncommonly successful consort whose singing impresses and gladdens in equal measures.

Few works in the choral repertory ask as much of performers and listeners as Beethoven’s Missa solemnis. Like the skeptical Verdi and the agnostic Brahms, Beethoven engaged in a complicated, sometimes clumsy dance with faith, the steps of which he never fully perfected. Like Mozart, though, the unconventionality of his musical efforts in liturgical forms offer irrefutable evidence of utter sincerity. In the case of his Missa solemnis, the specific tenets of what Beethoven believed are not as important as the manner in which he internalized those beliefs; the ways, that is, in which his personal faith bridged the divide between divinity and humanity. In all niches of his broad repertory, Harnoncourt’s performances were rarely without idiosyncrasies. His conducting of Verdi’s Aida was downright strange, for instance, the undeniably fascinating final recorded product sounding more like ambitious Grétry than red-blooded, Italianate Verdi Grand Opera. That the lifeblood of the performance of Missa solemnis on this disc emphatically does not flow from the familiar ‘echt-Beethoven’ vein tapped by Bernstein, Böhm, and Karajan does not diminish the potency of its plasma. There is no shortage of ‘different’ readings of Missa solemnis, but the vast majority of these fail to meaningfully deepen the listener’s comprehension of this magnificent work. Nikolaus Harnoncourt was a musician of strong convictions, and this Missa solemnis, billowing with meaning, is an affecting validation of his Job-like artistic ideology: to question is to discover, and to discover is to empower even the least-perceptive listener to commune with genius.