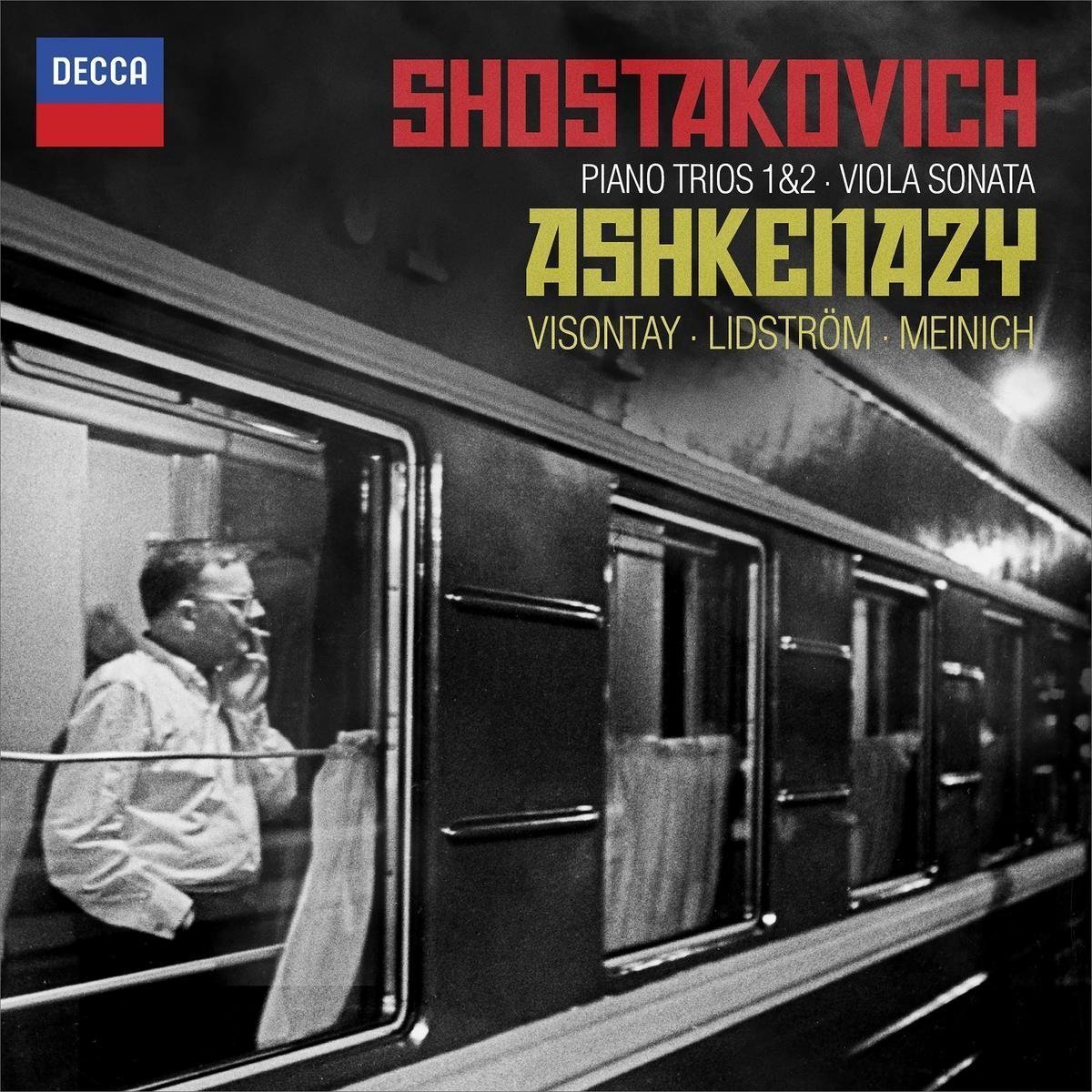 As is stated in the introduction to the disc printed on the reverse inlay of this compelling DECCA recording of the composer’s C-minor and E-minor Piano Trios and late Viola Sonata, Nizhny Novgorod-born pianist Vladimir Ashkenazy is among the few musicians working today who knew Dmitri Shostakovich not as an encyclopedia entry or name printed on the covers of scores but as a living, breathing man and an active, experimenting artist. A child of the turmoil that gripped Russian during the first decades of the Twentieth Century, Shostakovich was an artist of contrasts, reflected in the strong thread of irony woven through his compositions. Though they experienced the bleak realities of life in the Soviet Union in different eras and from different perspectives, Ashkenazy possesses direct connections not only with Shostakovich but, perhaps equally importantly, with the cultural and political climates that shaped the composer’s endeavors, as well. The three works on this disc, centered in a slightly dry acoustic that facilitates clear representations of complex musical figurations, span virtually the entire chronology of Shostakovich’s career, but distinctions of ‘early,’ ‘middle,’ and ‘late’ are not easily—or helpfully—made. Rather, retracing the path of the composer’s stylistic evolution, the performances that Ashkenazy and his colleagues give on this disc reveal how consistent the quality of Shostakovich’s work remained throughout his life. Like Caruso’s recordings of verismo arias, Toscanini’s conducting of scores by Verdi and Puccini, and Rostropovich’s performances and recordings of music by Prokofiev, Ashkenazy’s performances of these pieces by Shostakovich document the fruits of an unique artistic relationship between composer and interpreter, here shared with new generations of both performers and listeners.

Originally christened as Poème, the single-movement Opus 8 Trio No. 1 in C minor for piano, violin, and cello was completed in 1923, whilst Shostakovich remained a student at Petrograd Conservatory, and is essentially a declaration of love masquerading as a novice’s exercise. Though conceived in a sole movement, the music undergoes many transformations as the Trio progresses, and each metamorphosis is wrought by these musicians with musical and dramatic sensitivity. Expertly led by Ashkenazky, German-Hungarian violinist Zsolt-Tihamér Visontay, concertmaster of the Philharmonia Orchestra, and Swedish cellist Mats Lidström follow every turn in the music, their playing exhibiting all of the benefits of thorough preparation and familiarity with the music without any of the shortcomings. Spontaneity bursts from their performance of the Trio, and their approach to the piece, though wholly professional, seeks neither to disguise nor to apologize for the work’s youthful foibles. For a virtually innumerable plethora of reasons, many composers destroy or suppress their early works, so it is especially fortuitous that Shostakovich permitted this souvenir of his adolescence to survive. As played by Ashkenazy, Visontay, and Lidström, the Trio is an attractive introduction to Shostakovich’s chamber music and an enjoyable piece in its own right.

Written and premièred in 1944, the Opus 67 Trio No. 2 in E minor for piano, violin, and cello resounds with the discordant, disjointed tumult of World War II. This score, still startling after more than seventy years, shows Shostakovich at the zenith of his powers as a creator of distinctive musical textures, a peak that he occupied from this juncture until the end of his life, even when plagued by the ill health that ravaged his final decade. From the first bars of the tormented, unnervingly dissonant Andante, Ashkenazy and Visontay execute their parts with seemingly indefatigable concentration, and Lidström copes splendidly with his part’s toilsome harmonics. The three musicians collectively and individually brave the demands of the hellish dance that shapes the Allegro con brio movement, and the unexaggerated emotional directness with which they play the Largo movement heightens the sensations of the sickening loss and desolation of war that haunt the music. Shostakovich dedicated the Trio to his friend Ivan Sollertinsky, Artistic Director of the Leningrad Philharmonic and one of Soviet-era Russia’s foremost intellects, whose untimely death at the age of forty-one devastated the composer. In his capacity at the helm of the Leningrad Philharmonic, Sollertinsky tirelessly espoused the music of Gustav Mahler, earning him the appreciation of the Bohemian composer’s widow Alma, and it may have been this exposure to Mahler’s symphonies that prompted Shostakovich to construct the Trio’s closing Allegretto movement upon the foundation of a frenetic Klezmer tune, a Totentanz that recurs in Shostakovich’s 1960 String Quartet No. 8 (Opus 110). The emotional impact of the Allegretto is overwhelming, but Ashkenazy, Visontay, and Lidström remain clear-headed in their traversal of the music. The tragedy perceived by the listener is all the more heartbreaking for being presented by the musicians with no agenda other playing the score as the composer intended it to be played.

Completed in July 1975, mere days before the composer’s death on 9 August 1975, the Opus 147 Sonata for viola and piano was premiered by Fyodor Druzhinin, violist of the Beethoven Quartet and the piece’s dedicatee, and pianist Mikhail Muntyan in October 1975. After four decades, the espousal of virtually every subsequent virtuoso violist has solidified the Viola Sonata’s standings as both one of the most popular works in the viola recital repertory and one of Shostakovich’s most admired works. Like many artists’ last endeavors, the Viola Sonata has been frequently scrutinized for manifestations of its composer’s recognition and acceptance of approaching death, but Shostakovich’s music is, as ever, pragmatic rather than overtly programmatic, his allusion to the memory of a celebrated predecessor assumed to be Beethoven perhaps providing a tacit acknowledgement of his keen awareness of his own mortality. Here partnering Norwegian violist Ada Meinich, Ashkenazy plays as attentively in the Sonata as in the Trios. Meinich conquers the difficult pizzicato writing in the opening Moderato movement, and she and Ashkenazy achieve dizzying heights of expressivity in the movement’s crushing development section. This engrossing zeal persists into the Allegretto movement, into which Shostakovich injected thematic material from his 1942 opera The Gamblers. Meinich’s technique makes easy going of the music’s most daunting passages, and she and Ashkenazy accentuate the melodic fragments that the composer assembled in ways that often surprise. The closing Adagio movement quotes from Beethoven’s Moonlight Sonata in homage to the great composer, but the voice that emerges is unquestionably Shostakovich’s. Ashkenazy and Meinich convincingly propose their own answers to the Sonata’s questions, but this work also poses queries that each individual listener must consider, here asked with surpassing beauty.

Having recently celebrated his seventy-ninth birthday, Vladimir Ashkenazy has reached the disheartening time in his career at which the numbers of the fellow artists with whom he has worked and from whom he has learned continually grow fewer. Rather than resting on his laurels, as he has every right to do, Ashkenazy continues to explore new repertory, revisit works upon which his reputation was built, and expand his legacy with new recordings and collaborations. This new DECCA recording of Dmitri Shostakovich’s Piano Trios and Viola Sonata allies the esteemed pianist with three accomplished colleagues in performances of music that surely holds special significance for him. These performances are sure to hold special significance for listeners fortunate enough to hear this disc.