It was said by the first Chancellor of unified Germany Otto von Bismarck—and repeated but not, as has sometimes been suggested, originated by Tim Rice and Andrew Lloyd Webber in Evita—that ‘politics is the art of the possible.’ In this era of imperiled public funding for the Performing Arts, aging audiences, and short attention spans, what, then, is opera? Just as it was when the genre-initiating scores of Jacopo Peri and Claudio Monteverdi were first performed in the late Sixteenth and Early Seventeenth Centuries, opera is the art of the beyond possible—neither the impossible nor Ivor Novello’s ‘land of Might-Have-Been,’ that is, but what can be. Harnessing the power of what opera can be and what opera can mean to a community is central to the mission of Berkshire Opera Festival, an initiative that aims to build upon the momentum established by Berkshire Theatre Group since its inception in 2010 by bringing world-class but accessible and affordable opera to the Berkshire region of Western Massachusetts. With programming including recitals and an Opera Talk presented by eminent connoisseuse and industry insider Cori Ellison, the 2016 Festival culminates in late August and September with BOF’s inaugural mainstage opera production, a staging of Giacomo Puccini’s Madama Butterfly conducted and directed by BOF Artistic and General Directors and Co-Founders Brian Garman and Jonathon Loy.

In advance of the performances of Madama Butterfly, BOF’s objectives will be furthered by a pair of intriguing recitals, both of which will introduce singers from the Madama Butterfly cast, as well as special guests. On Wednesday, 10 August, the Festival will present Breaking Down Barriers: Songs by Female Composers of Puccini’s Time in Ventfort Hall Mansion in Lenox. Featuring passionate performances of Art Song repertory composed by unjustly-neglected veriste of Puccini’s generation, this performance will confirm that the creation of red-blooded Italian melodies is not solely a gentleman’s undertaking. A week later, on Tuesday, 16 August, Puccini’s own under-explored Art Songs seize the spotlight in The “Unknown Puccini”: A Recital of Songs by Puccini, performed at First Congregational Church in Stockbridge. With General Admission tickets priced at only $30, these budget-friendly recitals offer Manhattan-quality musical adventures that do not demand that attendees be Wall Street trust-fund babies. Tickets for both recitals can be purchased online or by phoning 413.213.6622.

Imaginatively brought to life by a team of talented, experienced artists including scenic designer Stephen K. Dobay and costume designer Charles Caine, BOF’s production of Madama Butterfly brings an ensemble worthy of Milan’s Teatro alla Scala, where the opera had its bafflingly unsuccessful première in 1904, to the stage of Pittsfield’s beautiful and historic Colonial Theatre. The Cio-Cio San of celebrated Moldovan soprano Inna Los will fall victim to the charisma of the Benjamin Franklin Pinkerton of tenor Jason Slayden, and the couple’s drama will play out under the benevolent watch of the Sharpless of baritone Weston Hurt. Mezzo-soprano Sarah Larsen will portray Cio-Cio San’s devoted maid Suzuki, and the meddlesome marriage broker Goro will benefit from the electric stage presence of tenor Eduardo Valdes, a Metropolitan Opera stalwart with nearly 600 MET performances to his credit. Bass-baritone John Cheek will pronounce Lo zio Bonzo’s thunderous denunciation of his delicate niece, and baritone Benjamin C. Taylor will woo her as the wily Yamadori. Mezzo-soprano Katherine Maysek will depict Pinkerton’s ‘vera sposa americana’ Kate, and to Pittsfield native baritone John Demler Il commissario imperiale’s utterances will be entrusted. Performances are scheduled for 27 and 30 August and 2 September, and tickets range in price from $20 to $98. An evening of top-quality, heartbreaking Italian opera in Pittsfield can be savored for the cost of dinner at the neighborhood trattoria! Tickets for Madama Butterfly can be purchased online or by phoning 413.997.4444.

One of the greatest challenges facing opera companies, particularly American opera companies, is the necessity of attracting new audiences to ensure the genre’s continued success without alienating the aficionados whose dedication has carried opera through the dark days of economic recessions and waning governmental support. With the myriad of instant-gratification distractions of today’s digital-media environment, a critical component of recruiting the next generation of opera lovers is overcoming the lingering stigma of opera’s perceived elitism. Talk is cheap, but, without compromising the integrity of performances and productions, opera can be, too. Committed to bringing opera that is ‘of the people, for the people, and by the people’ in the best Lincolnsian sense to Western Massachusetts, Berkshire Opera Festival is a paramount model of opera as the art of what can be. 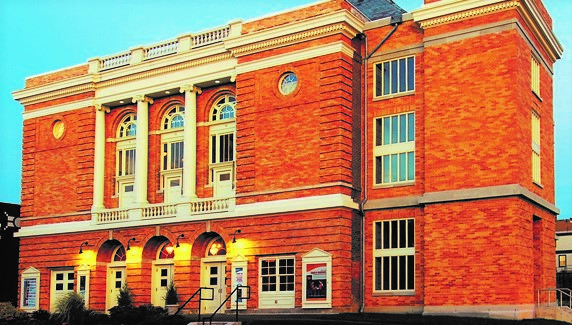 Nagasaki in the Berkshires: The Colonial Theatre in Pittsfield, Massachusetts, venue for Berkshire Opera Festival’s 2016 production of Giacomo Puccini’s Madama Butterfly [Photo by the author]