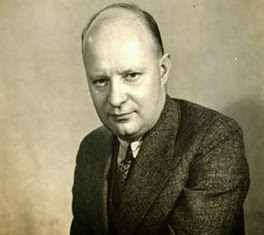 Though the composer’s achievements as both innovator and teacher continue to influence musical life in his adopted country, the music of Paul Hindemith is not heard in the United States with anything like the frequency that its quality merits. Neither of his most important operas, Cardillac and Mathis der Maler, has been performed at the Metropolitan Opera, and his symphonic works, several of which are among the finest scores of the Twentieth Century, are rarely heard in America’s concert halls. Hindemith’s tenure at Yale University and his rôle in the development of a talent as brilliant as that of German-American composer Lukas Foss notwithstanding, even a work as quintessentially American in scope as When Lilacs Last in the Door-Yard Bloom'd, his Requiem ‘For Those We Love,’ is rarely performed in the country that inspired it. Commissioned by Robert Shaw in response to the death of President Franklin Delano Roosevelt in 1945, Hindemith’s mammoth, seventy-minute score is a setting of the full text of the Walt Whitman poem from which it takes its title. Transplanting the ethos of Whitman’s very personal response to the 1865 assassination of Abraham Lincoln to the national grief following the death of FDR in the final days of World War II in the European Theatre was hardly daunting, the universality of Whitman’s verses expressing the dichotomy of public and private grief with timeless eloquence. Whitman’s text is perhaps the most glaring problem with Hindemith’s work, however: setting the complete poem resulted in verbosity that threatens to upset the balance between words and music and, thereby, to compromise the score’s impact. A product of Hindemith’s full maturity, his twelve-tone compositional idiom taking conventional tonality to its limits, When Lilacs Last in the Door-Yard Bloom'd is a lavishly-scored work closer in spirit to late Mahler and early Schönberg than to Stravinsky, to whose neo-Classical works Hindemith’s post-immigration music is often—but not altogether insightfully—likened. Hindemith’s musical signature is woven into the distinguished motivic writing with which he gave the work’s eleven movements an appreciable measure of continuity. Like all of the monumental choral masterworks from Bach’s Passions and Händel’s oratorios to Schmidt’s Das Buch mit sieben Siegeln and Britten’s War Requiem, When Lilacs Last in the Door-Yard Bloom'd is a piece that transcends its topical context and possesses the capacity to engage the imagination of any listener alert to its musical and textual imagery. Hindemith’s unique Requiem was an unexpected choice for the enterprising Choral Society of Durham, but it was an indisputably rewarding one. Above all, it was another sign of the vigorous health of the Performing Arts in North Carolina, as well as a much-welcomed opportunity to hear an important score by a composer who seems to have loved America far more than the American musical establishment now honors him.

Duke Chapel on Duke University’s West Campus is unquestionably one of America’s grandest houses of worship, but it proved a decidedly imperfect venue for performance of Hindemith’s When Lilacs Last in the Door-Yard Bloom'd. A more fittingly beautiful, reverent setting for the performance of such deeply emotional music could hardly be imagined, but the vaulted space robbed the sound of much of its immediacy. A layered, coarsely-textured score like Hindemith’s is heard to greatest advantage in the carefully-controlled aural environment of a concert hall. In Duke Chapel, the sonic impact of the work’s climaxes was compromised by the reverberant ambiance: neither the orchestra nor the chorus at top volume had the clarity needed to enable complete appreciation of Hindemith’s harmonic palette and the ingenuity of his tone-painting. Still, what the Choral Society of Durham orchestra and singers were able to achieve under the direction of Rodney Wynkoop despite the problematic sonics was astonishing. The orchestra’s playing was consistently accurate of both rhythm and intonation, and each of the musicians exhibited complete commitment to the score. The percussion parts were played particularly well, as was bugler Alexander Fioto’s shaping of ‘Taps,’ but all of the instrumentalists responded to Maestro Wynkoop’s leadership by giving performances that revealed the depths of Hindemith’s reactions to the text—an especially laudable feat under the acoustical circumstances.

A beloved presence on the faculty of Appalachian State University’s Mariam Cannon Hayes School of Music, Mary Gayle Greene sang the mezzo-soprano solos in When Lilacs Last in the Door-Yard Bloom’d with firm, attractive tone and expert dignity of declamation. Unfortunately, the full effect of her excellent diction—and that of her colleagues—could not be enjoyed, too many words being lost in the Chapel’s soaring space, but the concentration of her singing was unmistakable. The strength of her lower register was apparent in her stirring singing of the Requiem’s second movement, the arioso ‘In the swamp, in secluded recesses.’ She conveyed tremendous wonder in her singing of the lines ‘The hermit, withdrawn to himself, avoiding the settlements, / Sings by himself a song. / Song of the bleeding throat! / Death’s outlet song of life.’ Ms. Greene’s ascent to top F♯ on ‘The star, my departing comrade’ in the arioso ‘Sing on, there in the swamp’ was commanding, and she filled her lines in ‘Sing on! you gray-brown bird’ and the work’s finale, ‘Passing the visions, passing the night,’ with vibrant tone. The quiet intensity of Ms. Greene’s singing was revelatory: in music that invites over-singing, she allowed her ruby-hued timbre and the inherent expressivity of the music itself to shine without forcing the voice or the interpretation.

Singing music still associated in many listeners’ minds with George London, young baritone Lee Poulis made a powerful impression, his resonant voice filling Duke Chapel with burnished sound. His top Es on ‘I mourn’d and yet shall mourn with ever-returning spring’ and ‘With ev’ry leaf a miracle’ in the opening movement rang out splendidly, and his alternations with the chorus in ‘Over the breast of spring’ and ‘O western orb’ were evocative of the lections and responses of a liturgical service. There was an almost sensual intimacy in his utterance of ‘Here! coffin that slowly passes, I give you my sprig of lilac.’ Mr. Poulis blended his voice with Ms. Greene’s beautifully in ‘Sing on! you gray-brown bird’ and ‘Passing the visions, passing the night,’ and the understated eloquence of his delivery of the hymn, ‘And I knew Death, its thought, and the sacred knowledge of death’ was potently expressive. In both ‘O how shall I warble’ and ‘To the tally of my soul,’ the singer’s ardently masculine vocalism convincingly intoned the grief of a nation, his climactic top F on ‘With pure, deliberate notes, spreading, filling the night’ and easy negotiation of the high tessitura of ‘Borne through the smoke of the battles, and pierc’d with missiles, I saw them’ and ‘And the white skeletons of young men—I saw them’ conveying the horrors of war all the more meaningfully by contrasting the stark imagery of the text with the rounded allure of his tone. The hallmark of Mr. Poulis’s singing was vocal and sentimental fluency, and his articulate phrasing lent Hindemith’s angular melodic lines an unexpected appeal.

The superb singing done by Ms. Greene and Mr. Poulis was matched by the fantastic choral singing. Hindemith placed the foremost demands in When Lilacs Last in the Door-Yard Bloom’d on the chorus, and the Choral Society’s personnel rose to the occasion with preparedness and audible conviction. Both the opening movement and the March, ‘Over the breast of spring,’ drew refined singing from the choristers, and their singing in ‘O western orb’ and ‘O how shall I warble’ was admirably focused. The towering central fugue, ‘Lo! body and soul,’ was majestically done, and the Death Carol, ‘Come, lovely and soothing Death’ was phrased with the rousing essence of a true invocation. The bleakness of ‘To the tally of my soul’ was capably evinced, and the subdued emotional lucidity of the final movement inspired the chorus to movingly hushed singing. In passages taking their voices to peaks of volume and range, the choristers produced walls of sound that credibly suggested the waves of anger and anguish depicted in Whitman’s text. That the choristers managed to sing so demonstratively even when under the duress occasionally imposed by the music was indicative of the singers’ impeccable training and talent.

It is disheartening that a place is only rarely found amongst the profusion of performances of Bach’s Passions, Händel’s Messiah, Brahms’s Ein Deutsches Requiem, and Verdi’s Messa da Requiem for presenting Paul Hindemith’s When Lilacs Last in the Door-Yard Bloom’d. The bounties of Hindemith’s score are less easily won than those of Bach’s, Händel’s, Brahms’s, or Verdi’s music, but a competent performance of When Lilacs Last in the Door-Yard Bloom’d is a memorable experience, one with special significance for American audiences. The Choral Society of Durham’s performance—the Society’s first—attained a level of execution far beyond mere competence. Triumphing over a flawed aural setting, the performance was an unforgettable homage not only to Hindemith, the 150th anniversary of the Lincoln assassination, and the legacy of FDR but to the most basic principles of American recovery and resilience. Whether Hindemith, Händel, or Hildegard von Bingen, is this not the most awe-inspiring potential of music? 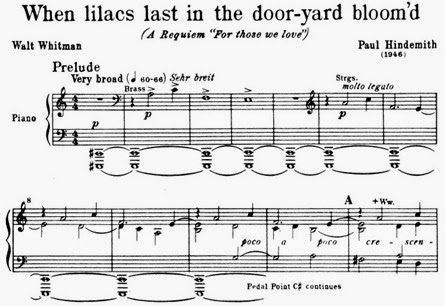