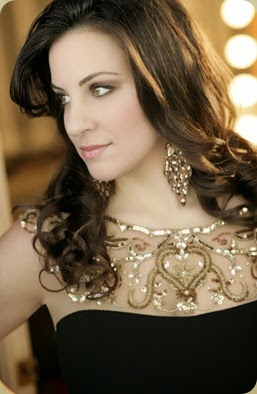 Singing for a cause: Soprano Joyce El-Khoury brings her mission to end bullying to Vancouver Opera’s Die Fledermaus [Photo © by Kristin Hoebermann; used with permission]

Even in a world torn by every conceivable stupidity, prejudice, and mischief, it is unfathomable that a woman as intelligent, talented, and beautiful as Joyce El-Khoury could ever have been subjected to bullying. That she was is indicative of the inexplicable, illogical nature of this blight on contemporary society. In conjunction with her appearances as the quick-witted Rosalinde in Johann Strauß II's Die Fledermaus at Vancouver Opera, Ms. El-Khoury adds her glorious voice to the growing chorus striving to forever silence the strident tones of bullying in North America and throughout the world.

'Some of you may know this already,' Ms. El-Khoury recently wrote, 'but I wanted to share something with all of you that is quite personal and present a cause that is very dear to my heart. For most of my childhood and teenage life, I was bullied. Unfortunately, the effects of bullying still affect me daily.' She admits that the scars of bullying continue to trouble her: they are, as she says, ‘something which [she has] worked very hard to overcome.’ As the effects of bullying continue to torment people of all appearances, faiths, genders, orientations, and races, Ms. El-Khoury has resolved to dedicate not only her own energy but the extraordinary power of Art to combatting the hardships endured by countless individuals. ‘I have decided to make it my mission’—an on-going commitment rather than a single act, that is—‘to shed light on bullying and start a dialogue about its short-term and long-term effects,’ she wrote.

When Vancouver Opera’s production of Die Fledermaus opens on 28 February, the audience for that performance will include two individuals whose dedication to ending bullying was rewarded by Ms. El-Khoury’s generosity. Transforming her personal odyssey into a tangible connection with her artistry, Ms. El-Khoury is sponsoring—at her own expense—a prize drawing for a pair of tickets to the opening-night performance. Between now and 5:59 PM PST on 25 February, support Ms. El-Khoury’s initiative and Pink Shirt Day by posting a photograph of yourself wearing an official Pink Shirt Day tee-shirt or any pink shirt on Facebook or Twitter, ‘liking’ and tagging Pink Shirt Day and Ms. El-Khoury in your post to indicate your assistance for this cause. Doing so will enter you in the prize drawing, from the entries in which Ms. El-Khoury will randomly draw the winner’s name on the evening on 25 February. Things as simple as donning a pink shirt and posting a ‘selfie’ on social media could win you a pair of box seats for the 28 February performance of Die Fledermaus with one of the world’s finest singers as Rosalinde!

The company having presented composer Neil Weisensel’s and librettist Shane Koyczan’s Stickboy, an operatic study in the darker recesses of individual psyches and collective humanity, earlier this season, Vancouver Opera is an especially apt setting for Ms. El-Khoury’s generosity. Even Die Fledermaus, which is commonly viewed as a delightful frivolity, has in its light-hearted depictions of disguised identities, marital infidelity, and lifelong grudges elements of unpleasantness that lurk beneath the frothy surface of the music. The moments of unpleasantness in her own life have contributed indelibly to the richness of Ms. El-Khoury’s courageous artistry, and her understanding of the unhappiness that courses beneath Rosalinde’s poised cleverness will make the beauty of her singing of her music all the more meaningful.

Additional Vancouver Opera performances of Die Fledermaus are scheduled for 5, 7, and 8 March.

To learn more about Ms. El-Khoury’s work, both as a singer and an activist for, as she summarizes her efforts, making bullying a thing of the past, please visit her website and follow her on Facebook and Twitter.

An opera singer’s life invariably requires sacrifices that are hidden from colleagues and audiences; sacrifices that singers themselves sometimes bury deeply within themselves in order to survive the trials of a career in an art form that demands extraordinary concentration in a tremendously distracting world. Joyce El-Khoury is a greater artist for being the same kind, caring lady both on and off the stage, whether she is portraying an ingénue or a queen or working to alleviate the suffering of those who suffer as she suffered. Every bullied child can see in her example and hear in her voice that most precious but most elusive commodity: hope. 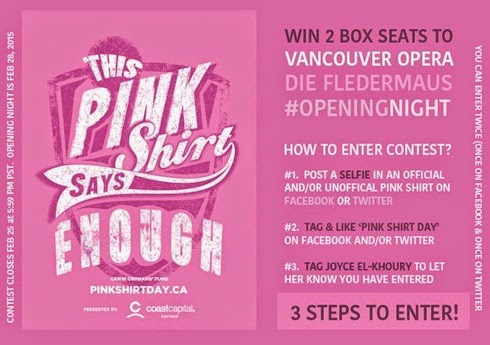