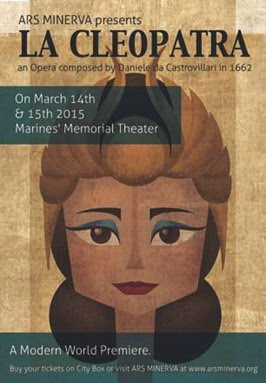 Remembered almost solely for the lament ‘A Dio regni, a Dio scettri,’ a piece introduced to modern audiences by its inclusion in Cleopatra-themed concerts by Cecilia Bartoli, Frà Daniele da Castrovillari’s La Cleopatra was first performed at Venice’s Teatro San Salvatore—today’s Teatro Goldoni—in 1662. A setting of a libretto by Giacomo Dall’Angelo, whose libretti for L’Aureliano and Il Demetrio were written for Carlo Pallavicino, one of the most popular composers in 1660s Venice, La Cleopatra is one of three documented operas by da Castrovillari: sadly, the composer’s manuscripts of Gl’avvenimenti d’Orinda and La Pasife have been lost. Presumably not heard since the Seventeenth Century, La Cleopatra will be resurrected in a pair of performances on 14 and 15 March in San Francisco’s Marines’ Memorial Theatre by Ars Minerva, an enterprising organization celebrating the first milestone in its mission to explore the rich but neglected vein of music inspired by and composed for the legendary Carnevale di Venezia.

Founded by internationally-acclaimed mezzo-soprano Céline Ricci, who will sing the title rôle in La Cleopatra, Ars Minerva brings together a team of exceptional artists with wide-ranging expertise. With an Advisory Team anchored by noted historian Dr. Theodore Raab, soprano Sheri Greenawald, and mezzo-sopranos Vivica Genaux [whom Ms. Ricci will join in reviving Pier Francesco Cavalli’s 1652 Veremonda, l’amazzone di Aragona at Spoleto USA 2015] and Frederica von Stade, Ars Minerva aims to recreate the storied atmosphere of Venetian Carnevale in the Seventeenth Century by involving modern listeners with the art and music of the era. ‘As a Baroque singer,’ Ms. Ricci recently said from San Francisco, ‘I’ve been involved in [the revivals of] several forgotten operas, and I immediately thought that it would be very exciting to play those operas [of the Venetian Carnevale] again and bring them to everyone.’ Her zeal is reflected both in the mission statement of Ars Minerva and in the organization’s inaugural events. ‘As a musician, it is part of my core values to keep past music alive, especially the music that has been forgotten,’ she remarked. ‘With the help of the Italian Cultural Institute, we are inviting a representative of the Biblioteca Marciana in Venice, who will give a talk on February 12. This presentation is crucial for the revival process.’

In addition to Ms. Ricci, the cast of Ars Minerva’s production of La Cleopatra will include countertenor Randall Scotting as Marc’Antonio, sopranos Nell Snaidas as Ottavia and Jennifer Ellis Kampani as Coriaspe, mezzo-soprano Molly Mahoney as Arsinoe, tenors Michael Desnoyers as Filenia and James Hogan as Domitio, and baritones Igor Vieira as Clisterno, Spencer Dodd as Dolabella and Arante, and Xavier Rivera as Augusto. ‘The team is quite young,’ Ms. Ricci commented. ‘Many former students of the San Francisco Conservatory will be singing and playing. We think that it is extremely important to include young artists in our production—and also to bring opera and [especially] Baroque opera to young crowds.’

Among so many forgotten operas originating in Seventeenth-Century Venice, why choose La Cleopatra for Ars Minerva’s first production? ‘First of all, La Cleopatra is an amazing opera,’ Ms. Ricci said. ‘The music is very varied, with interesting, captivating, and contrasted tunes. Every character is unique, important to the plot, which is quite twisted and unexpected. The end of the opera is totally in the spirit of Carnevale!’ Not surprisingly, the journey from conceiving the central focus of Ars Minerva to bringing La Cleopatra to the stage has been almost as suspenseful as the opera itself. ‘I came across [La Cleopatra] a little bit by chance,’ Ms. Ricci confided. ‘I was at UC Berkeley’s music library. I like to go there and look for music. I was in the microfilm department, opening the drawers, and I discovered Venetian operas that had never been played since their creation for the Carnevale season, including La Cleopatra. The manuscripts of La Cleopatra and a number of these operas are at La Biblioteca Marciana in Venice.’ The senses of adventure and discovery that inspired the decision to revive La Cleopatra are pillars of Ms. Ricci’s philosophy as a performer and musical trailblazer. ‘As I said, I had the immense privilege to be involved in [the revivals of] several forgotten operas, and to me it is the most thrilling thing I have ever done. It is natural to me to have the will of sharing this excitement with everyone. The excitement of bringing music back to life [is] a testimony of our past. It is a musical adventure but also a human adventure.’

The thrill of connecting neglected music with Twenty-First-Century audiences is apparent in every word that Ms. Ricci speaks about La Cleopatra and Ars Minerva’s plans for the future. It would be difficult to spend a few minutes in her presence without being completely won over by her enthusiasm. ‘I hope that the audience will be totally surprised by the singularity of La Cleopatra and the beauty of the music,’ she rhapsodized. ‘I also hope that everyone will feel the electricity of a revival in the air.’

If Ars Minerva’s performances of La Cleopatra possess the electricity of Ms. Ricci’s passion for the music and its rediscovery, they are certain to ignite Carnevale pyrotechnics in the audiences’ imaginations!

To learn more about Ars Minerva, visit the organization’s website. 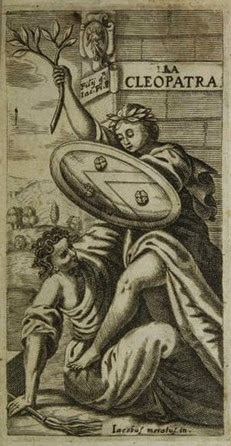