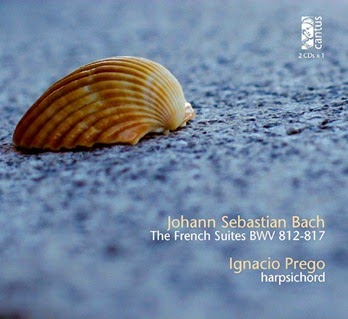 When, where, why, and for whom Johann Sebastian Bach composed many of the works upon the masterful qualities of which his reputation is founded are questions that history and musicological detective work have not yet managed to answer. Whereas Händel’s life and work are documented by a relative wealth of contemporary sources and Mozart’s career is catalogued in his extensive correspondence with his father and other influential personages, today’s understanding of Bach’s industrious artistic progress is in many instances more conjectural than factual. What is known about the splendid sextet of Suites for the harpsichord, BWV 812 – 817, misleadingly termed the French Suites perhaps for no better reason than because early published editions and even Bach himself designated them en français as ‘Suites pour le clavecin,’ raises as many questions as it answers, but the Suites, like almost all of their brethren among Bach’s œuvres, speak for themselves, especially when performed with response to their wonders and respect of their boundaries. Likely composed between 1722 and 1725, during the last years of Bach’s tenure in Köthen and the beginning of his residency in Leipzig, the French Suites are in fact nothing of the sort: though they make liberal use of the French dance forms that were prevalent throughout the first half of the Eighteenth Century, as well as forms popular beyond France, the Suites are for the most part conventionally Italian—as conventional, that is, as any music by Bach could be. Really, it is ridiculous to attempt to force Bach’s Suites into molds: they are, as this delightful recording confirms, intriguing, innovative works that challenge traditions by conforming to them in ways that other composers could never have conceived. This is an attribute that the French Suites share with Haydn’s chamber music and virtually all of the major works of Brahms. In order to play Bach’s music with the sort of immediacy that it demands, a musician must be an innovator who shares the composer’s visionary understanding of the relationships among rhythmic figurations, tonal patterns, and chromatic progressions. Young Spanish harpsichordist Ignacio Prego proves himself to be not only a gifted musician but also a galvanizingly prescient interpreter of the music of Bach.

At the start, it should be said that there is an incredibly magnetic delicacy in Mr. Prego’s playing. Though his keyboard technique is as period-oriented as it could be hoped to be, his is not the dainty, academic approach of historically-informed practitioners who sacrifice feeling in the pursuit of theoretical correctness. What Mr. Prego brings to Bach’s French Suites—music that some modern listeners contend is not suited to performance in concert halls due to the speculative origins of the Suites as pieces for study rather than display—is unabashed expressivity complemented by an instinctive sensitivity to the rhythmic and harmonic nuances of Bach’s style. Anyone who has sat at the keyboard with these scores knows that the composer’s demands are considerable, but Mr. Prego’s playing exhibits an audible spirit of youthful exuberance that makes the music seem unexpectedly spontaneous, like the final movement of Beethoven’s Violin Concerto, which in the hands of a great fiddler can be so ebullient that it almost seems to play itself. Mr. Prego never retreats from the less-smiling sentiments in the music, but he merges sunlight and shadows with a faculty that reveals the innate humanity of Bach’s creativity in new and surprising ways. Granted both a recording of acoustical warmth and ambiance engineered and mastered by Federico Prieto and use of a sumptuous-toned 2011 instrument built by Keith Hill in the styles of the Seventeenth- and Eighteenth-Century French and Flemish harpsichords of Pascal Taskins and the Ruckers family, Mr. Prego provides an exhibition of dizzying virtuosity allied with compelling emotional directness.

Though recent scholarship suggests an earlier genesis for BWV 812, consensus dates the first four French Suites to 1722, when Bach remained in the service of Leopold, Prince of Anhalt-Köthen. A turbulent time during which his first wife died unexpectedly and he met and married the accomplished soprano Anna Magdalena Wickle, Bach’s Kapellmeistership at the Calvinist Köthen court was an especially fertile period for the composition of instrumental music, including the Brandenburg Concerti, and the first four French Suites display a consistent but inventively-managed employment of the dance rhythms that were a vital element of the development of Bach’s mature idiom. Beginning with the succession of Allemande, Courante, and Sarabande movements, the first four Suites—and the fifth, as well—are evidence of the modes of ingenuity via which Bach differentiated his manipulations of rhythmic formulae according to the moods of the pieces he crafted. Mr. Prego carefully examines the prevailing temper of each Suite and meaningfully conveys it in each phrase. The démodé character of the First Suite in D minor (BWV 812) receives beguilingly courtly treatment from Mr. Prego, whose crisp playing utilizes the harpsichord’s mechanism to maximize the impact of Bach’s sharply-defined rhythms, particularly in the Menuet and Gigue. The lovely Air at the center of the Second Suite in C minor (BWV 813) is affectionately, almost lovingly phrased by Mr. Prego, who energetically darts through the Menuet and Gigue with irrepressible vigor and elegance. Originally identified by Bach as a Gavotte, the Anglaise—a dance very similar in essence to the Gavotte—in the Third Suite in B minor (BWV 814) benefits from the consistency of Mr. Prego’s natural rendering of cadences, and here, too, the concluding Menuet and Gigue are delivered with irresistible charm. Building upon the strengths of his traversals of the opening Allemande, Courante, and Sarabande, the Gavotte and Air in the Fourth Suite in E-flat Major (BWV 815) are radiantly played, and the Menuet and Gigue bustle with élan.

Speculated to be products of the time spanning Bach’s transition from the Köthen court to his assumption of duties as Kantor in Leipzig, the final pair of French Suites represent a subtle shift in the composer’s strategic alignment of forms. The Allemande – Courante – Sarabande sequence remains intact, but to the Sixth Suite in E Major (BWV 817) is added an introductory Prélude, played by Mr. Prego with rhapsodic ardor that enlarges the scope of the thematic material without wandering beyond its innate boundaries. The listener who believes that the articulation of motivic devices for dramatic purposes originated with Richard Wagner should make the acquaintance of the French Suites, especially as Mr. Prego performs them. Bach was an early master of assembling very different musical garments with noticeably similar threads, and Mr. Prego finesses every seam in his confident negotiation of the Fifth Suite in G Major (BWV 816). Though the Suites are presented on disc in an order that illuminates the metamorphosis of Bach’s craft rather than consecutively, Mr. Prego manages to subtly contrast the like movements of the Fifth and Sixth Suites—the Allemande, Courante, Sarabande, and Gavotte—while also disclosing the complementary textures of each movement. The Bourée, Loure, and Gigue of the Fifth Suite are revealed to be close relatives of the Menuet Polonais, Bourée, Gigue, and Petit Menuet of the Sixth Suite. Mr. Prego does not make conspicuous efforts to cause the movements to ‘sound different,’ as it were: as a truly great conductor can highlight the manner in which each of Mahler’s Symphonies is to an appreciable extent an independent entity within a startlingly coherent, cumulative whole, Mr. Prego dedicates to his playing of the French Suites cognitive grasps of each phrase and its significance in its movement, its Suite, and the French Suites collectively.

Many of the most renowned harpsichordists of the past half-century have recorded their interpretations of Bach’s French Suites, and many of these interpretations possess idiosyncrasies and inconsistencies that intrude between the music and the listener’s complete appreciation of it. Ignacio Prego brings to his performances of the French Suites on these discs a modernity that, being absolutely free of artifice, is marvelously compatible with Bach’s contrapuntal genius. The mistake that many talented musicians make in playing Bach’s music is modeling their performances as lectures on topics grander than the music itself. With this recording of the French Suites, Ignacio Prego reminds listeners—and, hopefully, fellow musicians, as well—that Bach’s music does not require proselytizing. Excellent music excellently played needs no pedagogical justification.