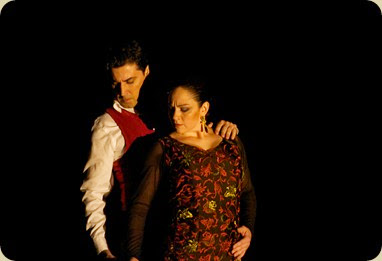 The origins of the defining music, dance, and even the nomenclature of flamenco are debated by scholars, but whether it is a legacy of few or many cultures the art of flamenco is now as emblematic of Spanish culture as tapas and bullfighting. In the years since the death of Francisco Franco, years during which Spaniards have reclaimed, rejuvenated, and shared their cultural identities with indomitable passion, flamenco has rivaled chorizo and manchego as Spain’s most embraced export: some sources suggest that there are now more escuelas de flamenco operating in Japan than in Spain! The popularity of flamenco outside of Spain cannot be fully explained by novelty or nostalgia, however. In the United States, at least, there is surely a strong element of envy at the core of interest in this art form that many Americans erroneously attribute solely to gypsy caravans and bandits’ dens. There is an incomparable richness to Spanish culture that transcends the compelling but simplistic depiction in Bizet’s Carmen—a richness that rightly fascinates denizens of a polyglot society without a strong central ethos. Beyond their roots in Andalucía, the cante, toque, baile, and palmas of flamenco embody an unique social awareness that encompasses not only the gitanos, Spain’s Romani population, but also generations of Basques, Jews, Moors and modern Muslims, and Christians of all ethnicities whose credos and traditions have assimilated into the extraordinary gazpacho of contemporary Spain. Like so much Art, flamenco is a celebration of humanity, of the joys and sorrows of love, loss, and carrying on. It is not a pseudo-philosophical exercise in forgetting or forgiving differences and wrongs, but it is a sterling example of using Art as a means of understanding the universality of strife and channeling dark emotions into meaningful, cathartic modes of expression. Even if it were not one of the world’s most technically-demanding, breathtakingly beautiful genres of music and dance, flamenco would be invaluable as an artistic celebration of diversity that also represents the troubled unity of a great nation.

Founded in 1983 by Carlota Santana and Roberto Lorca, Flamenco Vivo Carlota Santana has for the past three decades shared the irrepressible spirit of flamenco with audiences throughout the world. Presented by Elon University’s Lyceum Series in the University’s McCrary Theatre, the company’s program The Soul of Flamenco took the audience on a captivating journey to the cafés cantantes of the Spain of Ernest Hemingway and Federico García Lorca. An exceptionally versatile performer whose credentials extend from theatrical and operatic productions to public-school and university classrooms, Ms. Santana has successfully built a thriving company that upholds the unwavering commitment to the preservation, exhibition, and perpetuation of flamenco that has guided her career. What Flamenco Vivo Carlota Santana displayed on the McCrary Theatre stage was her vision realized on a grandiose but invitingly intimate scale. Most thrillingly, however, the performance was a fiesta de flamenco that engaged the Elon community in an unusually fulfilling cultural exchange.

In the opening number, Mujeres, the choreography by Antonio Hidalgo, a native of Lucena, Córdoba, Spain, provided a veritable masterclass in the intricacies of flamenco, combining classic elements of the genre’s formative years in the Eighteenth and Nineteenth Centuries with modern trends. Following an exhilarating display of fiery footwork against the backdrop of a dark stage by Ángel Muñoz, the full company presented an in-depth exploration of the representative uses of castanets, fans, shawls, and the beautiful dress with stylized train—the bata de cola—in contemporary flamenco. Perhaps the greatest ambiguity of flamenco is its mixture of formality and sensuality, and the dancers interacted with one another with suggestive elegance. Expectedly, the costumes by Immaculada Ortega, Enrique Arteaga, and Roberto Cartagena were gorgeous, as they were in each of the performance’s episodes. The good-natured one-upmanship of the dancers engendered masterful technical feats that combined with artistic grace as delicate as huesos de santo.

If the soul of flamenco is dance, its lifeblood is music, and the genre’s Moorish associations were especially apparent in Música flamenca, the interlude in which guitarists Gaspar Rodríguez and Pedro Medina, Barcelonan singer and percussionist ‘Yiyi’ Francisco Orozco, and Sevillano singer Félix de Lola were featured in a magnificently euphonious performance of mesmerizingly impassioned music typical of flamenco. Both Mr. Rodríguez, a native of Estepona, Málaga, and the Murcia-born Mr. Medina played rivetingly, the colorations that they drew from their guitars’ strings conjuring a quintessentially Spanish atmosphere. Mr. Orozco’s dizzying mastery of the cajón was matched by the sonorous soulfulness of his singing. His ethereal timbre was complemented by Mr. de Lola’s earthier tones, and their voices combined in harmony very effectively. The punishingly high tessitura of the vocal lines was dominated by Mr. Orozco’s and Mr. de Lola’s singing, and the sounds created by this quartet of superbly gifted musicians were electrifying.

Martinete-Seguiriya, danced by the company, offered a vignette of the martinete, the hammering of the forges also mimicked by Verdi in the familiar ‘Anvil Chorus’ in Il trovatore, followed by the dolorous weight of the seguiriya. Making use of the polarity of the two styles, the dancers and musicians insightfully highlighted the inherent ambivalence of flamenco, the close relationships between pleasure and pain. One of the most enduring styles in Classical flamenco, the seguiriya united the company in a concentrated examination of the darkest elements of the genre: the Arab and Sephardic influences in the vocal lines introduced a suggestion of desperation, and the increasingly incensed dancing reflected the life-or-death intensity of the music.

Charo Espino made the improvisational Cantiñas nothing less than a tour de force. A native of Sevilla, the principal city of Andalucía, Ms. Espino took the stage with the sort of confidence that only a Spanish woman—and a great artist—can possess, and her dancing was awe-inspiring. The arching of her back, the remarkable fluidity of movement of her hands, and her complete domination of the stage with even the most understated of gestures were exemplary, and she wove a convincing, discernible narrative despite the spontaneity of the dance. Ms. Espino’s performance was the kind of singular artistic experience that can never be duplicated and seemed to suspend time.

Las Fiestas, a variation of the company’s Navidad Flamenca depiction of a traditional Spanish Christmas celebrated through dance, was a masterpiece of charm, beauty, and unaffected sentimentality. A progression of gifts paved new avenues of adventure for dramatic expression by the full company. The present of a stunning embroidered shawl prompted a lyrical but lively duet for dancer and mantón from Alice Blumenfeld; gifts of castanets and a fan inspired an invigorating contest between Mr. Hidalgo and Leslie Roybal: both numbers were stylishly danced. Still, the central focus of Las Fiestas was young María López, whose dancing already demonstrated adult sensibilities but also beguiled the audience with girlish wonder and exuberance. Keeping pace with the full company, including Mr. Lola in a humorous battle of musical wills at the start of Las Fiestas, Ms. López was a brilliant example of the bright future of flamenco.

Choreographed by Mr. Hidalgo, Rodeña ebulliently blended his characterful dancing with that of Ms. Roybal, their techniques complementing one another in expositions of the lighthearted byplay of the male-female partnership in traditional flamenco. In the subsequent Flamenco puro, Mr. Muñoz returned to the stage to ignite a conflagration of lightning-fast footwork and authentically Latin temperament. A native of Córdoba, Mr. Muñoz championed the sportive prowess of legends of the genre such as Antonio Canales, Vicente Escudero, el Carrete, and el Farruco. Bestriding the empty stage like a matador in the ring, he gave a barnstorming performance of uncompromising technical sagacity and endless imagination.

A more enthralling finale to the performance than Fin de fiesta/Bulerías could hardly have been devised. Offering each member of the company a showcase for his or her signature steps, Fin de fiesta and Bulerías ended the show as it began, with fabulously persuasive manifestations of the best of flamenco past, present, and future. Despite the enduring popularity of flamenco, performances of the quality paraded by Flamenco Vivo Carlota Santana across the stage of the McCrary Theatre are unusual. The world could learn much from flamenco, not least about the necessity of accepting differences in the quest for solidarity. Were all lessons as pleasurable as Flamenco Vivo Carlota Santana’s The Soul of Flamenco, perhaps more individuals, institutions, and governments might espouse Art as a catalyst for peace and tolerance.