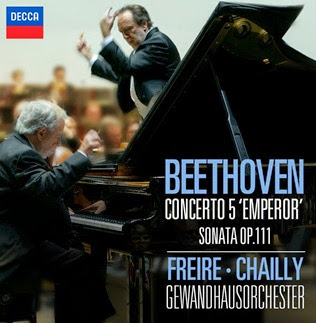 The acquaintance of Brazilian pianist Nelson Freire with the work of Ludwig van Beethoven is one of the most fruitful familiarities in Classical Music. Mr. Freire, who celebrated his seventieth birthday in 2014, started playing Beethoven’s music when his age was measured in single digits, and he first performed the ‘Emperor’ Concerto at the age of twelve, when he played the piece in Rio de Janeiro. This new recording with Leipzig’s treasured Gewandhausorchester and Riccardo Chailly is the zenith of a lifetime’s affection: rather than being a reading of a musical masterpiece scaled to impress the listener with grandiose gestures, it is a performance shaped by intimate communication among music and musicians. It would be ridiculous to suggest that Mr. Freire ‘speaks’ with Beethoven, but his playing on this disc undeniably enables Beethoven to speak to the listener.

In this performance, Maestro Chailly and the gifted instrumentalists of the Gewandhausorchester, the ensemble by which the ‘Emperor’ Concerto was premièred in 1811, bring an astonishing consistency of approach to Beehoven’s music, creating a charged atmosphere in which Mr. Freire’s playing is like bursts of electricity. The performance of the Concerto as a whole is unexpectedly restrained, however. The formal grandeur of the opening Allegro movement quickly makes way for softer effects, and even when the solo lines are most unstintingly virtuosic Mr. Freire maintains a strong element of introspection that invites the listener into the music instead of engendering a respectful distance. Played with such uncompromising attention to subtleties, the Allegro discloses details seldom heard with such clarity. The inventiveness of Beethoven’s writing for woodwinds is particularly apparent, and the Gewandhaus players take great care to complement Mr. Freire’s touch with their own phrasing. The thematic links of the development of the opening movement with the second and third movements have almost never been so apparent as in this performance. Especially in the closing pages of the Allegro, pianist, orchestra, and conductor render the music with an alluring lightness that does not lessen its cumulative power.

The Adagio un poco mosso second movement is a piece of such unnerving serenity that many pianists and conductors are tempted to bury the simple beauty of the music beneath an avalanche of Freudian complications. Like Händel in ‘Lascia ch’io pianga’ and Mozart in the slow movements of his Clarinet Concerto and Quintet, Beethoven employed a major key in the Andante to foster a piercing attitude of wistfulness, regret, and unanswerable longing. Maestro Chailly and the orchestra play the movement’s opening chords hypnotically, as though they are eavesdropping on a very private scene, and Mr. Freire’s delivery of the wide intervals and wandering figurations of the piano’s entrance seems engagingly rhapsodic but is governed by a very precise adherence to rhythm. Here as in the Concerto’s outer movements, Mr. Freire uses Beethoven’s ornaments—not least the distinctive turns—with wonderful expressivity, exploring the oft-ignored twinkles of humor in the music. Mr. Freire manages the transition from the Adagio un poco mosso to the Rondo with understated theatricality that maximizes the impact of the contrast between the tranquility of the final bars of the second movement and the thundering chords of the final movement.

With the repetitions of notes in the first statement of the primary theme in the concluding Rondo, Beethoven created an impression of exuberance so tremendous that it seems to flare up almost clumsily. Though at its core a relatively traditional seven-part concert rondo, the final movement of the ‘Emperor’ matches the first movement in originality, the dialogue between piano and orchestra shaped in the manner of a good-natured competition. In the Rondo, Mr. Freire’s technical prowess is at its most extroverted, put to use in muscular but sensitive executions of the boldly-drawn piano lines. The rhythmic accuracy of Mr. Freire’s trilling should be a model to all pianists, particularly in the sustained trill that ends the cadenza and ushers in the final statement of the majestic opening theme. Throughout the Rondo, Mr. Freire and Maestro Chailly construct a performance that combines the stylistic limpidity expected of a composer most influenced by Mozart with the characteristic volatility of Beethoven.

Composed in 1821 and 1822 and likely sketched in 1820, while the composer was completing his Missa solemnis, the Opus 111 Piano Sonata in C minor is the last of Beethoven’s sonatas for the instrument that his work substantially transformed. Intriguingly, however, thematic material ultimately developed in the Sonata dates as far back as the turn of the Nineteenth Century, offering invaluable insights into Beethoven’s compositional process. In the Maestoso first movement, Mr. Freire shortchanges none of the violence of the music with his innately lyrical playing. He realizes the full effect of the diminished-seventh chords without exaggerating their prominence, and the linearity of his playing reveals as complete an understanding of the intricacies of Beethoven’s unconventional harmonic progressions as any pianist has demonstrated on recordings in recent years. The Picardy third with which Beethoven achieved the modulation to C major for the Arietta second movement is in Mr. Freire’s performance a warming ray of sunlight. The imagination with which he plays the series of variations on the primary theme is compelling, but what is most gripping is Beethoven’s remarkable ingenuity. The pianist elucidates all of the futuristic elements of the music without adopting any anachronistic mannerisms. Appropriately, he plays the Sonata with a musical modus operandi that would serve equally well in sonatas by Haydn or Mozart. After six decades of experience with Beethoven’s music, Mr. Freire knows that a monumental work like the Opus 111 Piano Sonata needs only to be played well: every nuance of interpretation is already in the music.

With these recordings of the ‘Emperor’ Concerto and Piano Sonata No. 32, Nelson Freire encapsulates a career’s involvement with the music of Beethoven in an hour of unstinting grace. Preserved in sound that honors DECCA’s exalted tradition of sonic excellence, this disc is an invigorating traversal of two of Beethoven’s greatest works for the piano. It is also a lesson in the art of building a career that endures because love for music is its guiding principle.