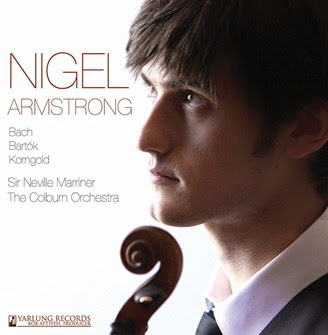 Few decisions are more important to the career of a young artist than those that determine repertory for the recording that will introduce him to listeners not yet fortunate enough to have heard him in concert or recital. Despite the existence of far more masterful compositions for the violin than musicians talented and conscientious enough to play them, it often seems that young fiddlers confine their fledgling musical adventures to a dishearteningly small handful of pieces. Recording the violin concerti of Mozart, Beethoven, Mendelssohn, Brahms, and Tchaikovsky can establish or solidify a young violinist’s reputation but also invites comparisons with the work of the greatest artists of the past. What could be more dispiriting for a violinist at the start of his career than to be subjected to the kind of scrutiny that concedes excellence whilst lamenting that details of his technique or interpretation are markedly inferior to those of this or that long-dead player? It seems counterintuitive to criticize the high level of technical accomplishment among today’s concert violinists, but the strangely damaging fact is that there are too many virtuosi; too many technical wizards who can whirl through the intricacies of any of the great canonical concerti with panache but without exploring the nuances of the music or making a credible argument on its behalf. In the first years of an exceptionally promising career, young violinist Nigel Armstrong exudes the confidence of a violinist who is not only a master technician but also has unique interpretive insights that he is eager to share with audiences. Choosing Béla Bartók’s Sonata for Solo Violin, Johann Sebastian Bach’s Sonata No. 3 for unaccompanied violin, and Erich Wolfgang Korngold’s Violin Concerto for this disc, expertly produced, mastered, and engineered for Yarlung Records by Bob Attiyeh, Jacob Horowitz, Steve Hoffman, and Randy and Linda Bellous, Mr. Armstrong made decisions that qualify him as an uncommonly versatile musician and provide the listener with an unexpectedly challenging initiation into the enchanting sphere of a fantastic young violinist’s artistry.

Bartók’s Sonata for Solo Violin was commissioned in November 1943 by Sir Yehudi Menuhin, who seems to have premièred the piece in New York on 26 November 1944. [In his autobiography, Unfinished Journey, Menuhin notes the November 1944 date as that of the première of the Sonata. In the New York Times obituary for Bartók published on 27 September 1945, a day after the composer’s death, it is stated that the Sonata had not yet been performed, however.] Composed in 1944 in New York and in Asheville, North Carolina, where he was undergoing treatment for the leukemia that would prematurely end his life, the Sonata for Solo Violin is a tremendously demanding work that requires incredible concentration from the player. Though not a true chaconne in the Baroque sense, the Tempo di ciaccona opening movement is the most noticeably Hungarian of the Sonata’s four movements. Both in its rhythmic patterns and distinct harmonies, the first movement inhabits the domain of Bartók’s beloved Hungarian folk music. Mr. Armstrong displays total poise in his negotiations of the unconventional rhythms, deriving the full melodic impact from the composer’s disjointed phrases. The three-voice fugue in the second movement, marked Risoluto, non troppo vivo by Bartók, draws from Mr. Armstrong playing of uncompromising virtuosity, each subject delineated with impressive clarity. The lyricism of the adagio Melodia movement shimmers in the warm glow of Mr. Armstrong’s tone, and he manages to devote considerable eloquence to his elucidation of the melodic lines without indulging in exaggerated sentimentality. The extravagant difficulty of the passagework in the Presto final movement, devised by Bartók using quarter-tones, is conquered with youthful exuberance by Mr. Armstrong. His command of double-stops, wide intervals, and harmonics is unfailingly accurate—especially so considering that his performance of the Sonata was recorded in a single take. Bartók’s music is not easy going for either the violinist or the listener, but Mr. Armstrong reveals much beauty where many violinists have found only collisions of notes.

Bach’s Sonata No. 3 in C major was composed sometime between 1703 and the publication of the collection of Partitas and Sonatas for unaccompanied violin in 1720. Whether the C-major Sonata and its companions were composed for performance by noted violinists of Bach’s time or by himself or his sons remains unknown, but the quality and inventiveness of Bach’s music is beyond doubt. Bach’s use of double counterpoint in the C-major Sonata is compelling, and the level of understanding of the instrument exhibited by the score is remarkable. In the opening Adagio, Mr. Armstrong plays with feeling that remains within boundaries of good taste, and his performance of the subsequent Fuga movement, its principal subject derived from a chorale popular in Bach’s time, indicates a thorough familiarity with the composer’s contrapuntal writing. The contemplative, almost desolate simplicity of the Largo movement is expressively rendered, with Mr. Armstrong’s unerring intonation contributing powerfully to the prevailing sentiment of the music. The closing Allegro assai movement represents Bach at his most playful, the doubts of the third movement brushed aside by the unfettered joy of music-making. As in the final movement of the Bartók Sonata, Mr. Armstrong draws inspiration from the music, playing Bach’s undulating phrases with individuality but obvious attention to the historical context of the music.

In his performance of Korngold’s Violin Concerto, Mr. Armstrong is joined by the Colburn Orchestra and Sir Neville Marriner. Here, unfortunately, the excellently-balanced, natural sound achieved by Yarlung’s technical team allows a great deal of audience noise to intrude into the listener’s enjoyment of the superb performance. Composed in Los Angeles in 1945 and dedicated to his mentor’s widow, Alma Mahler, Korngold’s score employs themes from several of his successful film scores. The Concerto was premièred by Jascha Heifetz and the St. Louis Symphony in 1947, and the composer wrote that the music was conceived for an artist like Caruso rather than a virtuoso like Paganini: he had particular praise for Heifetz, in whose playing he believed that the finesse of the former and the technical largesse of the latter were combined. He might have expressed the same sentiments about Mr. Armstrong. The opening Moderato nobile movement is shaped by precisely the quality that the composer’s marking requests: nobility. Bolstered by the generally fine playing of the young orchestral musicians and the reliably intelligent leadership of Maestro Marriner, Mr. Armstrong elucidates the broadly tuneful strands of Korngold’s late-Romantic writing. This is nowhere more apt than in the Romanze: here, violinist, orchestra, and conductor collaborate on a reading of concentrated intensity, the moody beauty of the music magnificently highlighted. After the Caruso-like effusions of the Romanze, the Allegro assai vivace final movement conjures the pyrotechnical displays of Paganini, and Mr. Armstrong proves no less capable of delivering thrills in extroverted passages. As with the Bartók and Bach Sonatas, he has clearly allowed himself time to truly understand Korngold’s compositional idiom, and even in the company of very good recorded performances of Korngold’s Concerto—including Heifetz’s own—his traversal of the music is competitive.

What impresses most in the playing of Nigel Armstrong on this disc is not his technique, for it is to be hoped that any young violinist offered the opportunity to make a recording is an admirable technician. Mr. Armstrong leaves no doubt about the validity of his credentials as a musician, but the foremost joy of this disc is the inception of a recording career for an artist whose heart, soul, and intellect are as engaged by his playing as his fingers. There are many youngsters who can play the violin music of Bartók, Bach, and Korngold, but Mr. Armstrong is not another technically-proficient but spiritless product of a conservatory education. In the performances on this disc, he reveals himself to be an ingenious artist with much of value to say through music.