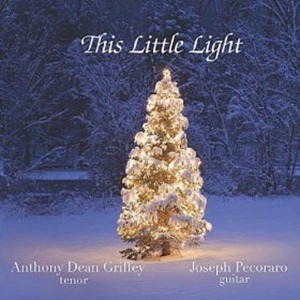 For better or worse, discs of holiday standards are virtually inevitable fare for singers of all genres.  The ‘better’ is that listeners sometimes gain opportunities to hear favorite artists in unlikely contexts and on ‘lighter’ forms than are typical: the ‘worse’ is that, in addition to entering an extraordinarily crowded field in which almost every listener already holds treasured performances close to his or her heart, many holiday discs are made-on-the-fly affairs with little artistic merit.  For the most part, gone are the days when an artist of the merit of Leontyne Price might collaborate with colleagues like Herbert von Karajan and the Wiener Philharmoniker to record an holiday-themed disc that genuinely—and attractively—supplements her discography and expands her artistic legacy.  Too many holiday discs are commercial enterprises with only tenuous attachments to the holidays they purport to celebrate.  Refreshingly, this is not the case with This Little Light, a new recording of holiday favorites by High Point-born tenor Anthony Dean Griffey and guitarist Joseph Pecoraro.  Benefitting North Carolina charities that aid the displaced and mentally ill, This Little Light is audibly a tremendously meaningful project for both artists, and in recording this disc they have given listeners the incomparable gift of an holiday disc that returns to the exalted standards of previous generations of artists and offers stirring performances of some of the most popular songs of the season.

Mr. Griffey, familiar to North Carolina audiences as a treasured native son and a beloved presence at the Eastern Music Festival, is one of the most gifted tenors heard on the world’s stages during the past fifteen years.  Since his 1995 début at the Metropolitan Opera in Wagner’s Parsifal (in the performance in which Stephanie Blythe also made her MET début), Mr. Griffey has earned the affection of the New York public.  His performances of the name part in Benjamin Britten’s Peter Grimes revealed not merely an uncommon artistic sensibility but a voice ideal for the rôle, a voice in which beauty and power are blended in perfect balance.  In this recital of holiday music, as much as in Peter Grimes or the music of Mendelssohn or Weill, Mr. Griffey sings with a voice that seems drenched with starlight, the timbre both brightly ethereal and warmly resonant.  Nonetheless, so sure are Mr. Griffey’s interpretive choices that he never risks overwhelming the music or over-singing in the manner familiar from many opera singers’ holiday outings on records.

Credit for the high quality of this disc is also due to guitarist Joseph Pecoraro, whose guitar arrangements are used for the recording.  Each song is arranged to fit Mr. Griffey’s voice to perfection, and Mr. Pecoraro’s guitar accompaniments are unfailingly gorgeous.  It is a testament to Mr. Pecoraro’s skills as an arranger that there is not one song on the disc that is not impeccably tasteful.  A member of the faculty of the UNC School of the Arts, Mr. Pecoraro is another North Carolina treasure whose music-making is a great gift to the State and to all who are privileged to hear it.

Every song on The Little Light receives a memorable performance, but even amid such excellence there are particularly sublime moments.  Mr. Griffey and Mr. Pecoraro touch the heart with the title track and a poignant performance of ‘Sweet Little Jesus Boy,’ Robert MacGinsey’s classic song that is often mistaken for an African-American Spiritual.  The legitimate Spiritual ‘Go, Tell It on the Mountain’ is shaped with attention to its narrative, its musical structure emerging with a simple eloquence akin to the Lieder of Franz Schubert.  ‘Mary, Did You Know’ receives from Mr. Griffey and Mr. Pecoraro a performance of great emotional immediacy, confirming its stature as one of the finest holiday songs of recent years.  Classics of the holiday repertory sound newly-minted in this performance, but especially impressive is Mr. Griffey’s singing of ‘O Holy Night,’ Adolph Adam’s ‘Cantique de Noël’ that has been a favorite of opera singers since the dawn of recording technology.  Mr. Griffey’s performance of this song, elegantly arranged and accompanied by Mr. Pecoraro, is nothing short of remarkable, worthy of comparison with the greatest accounts by opera stars past and present—and superior to many of the finest performances on records.

For many people, the holiday season is a time of wonder, joy, and hope for the future, and hearing this disc of holiday music performed by Anthony Dean Griffey and Joseph Pecoraro inspires these feelings in the listener.  There is the wonder expressed so innocently but effectively through these songs.  There is the joy of hearing the music performed so magnificently.  There is the hope for the future, that much more will be heard from these great artists.  This Little Light shines very brightly indeed. 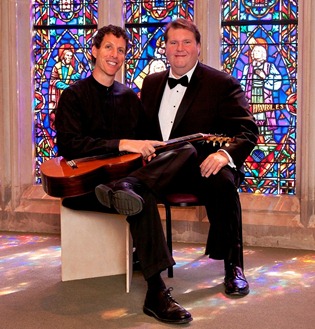 Please click here to purchase a copy—or several copies—of This Little Light.  In addition to its superb musical quality, proceeds from the sale of this disc benefit charities that assist the homeless and mentally ill.  Thank you.