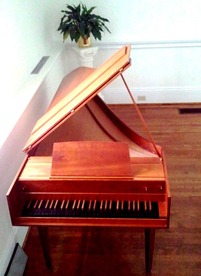 One of the rarest but most thrilling occasions in Music is when a performance, by some combination of magical factors, manages to be a genuine event.  The recital on Friday, November 2, by world-renowned harpsichordist Jory Vinikour in the Chapel of Columbia’s Ebenezer Lutheran Church was such an occasion: closing a ‘Month of Harpsichord’ launched in celebration of the gift by Dick and Kathy Coolidge of a beautiful instrument by German-born harpsichord builder Eric Herz, the recital exuberantly achieved the goal of exploring all of the musical possibilities of the instrument, which was improved by renowned harpsichord maker—and South Carolina resident—Richard Kingston.  The acquisition of an instrument by an important maker, lovingly reconstituted by one of the greatest masters in his field, is a remarkable milestone in the musical life of a congregation, and a wonderful aspect of the recital was the presence of an audience filled with congregants excited about the treasure acquired by their church and eager to hear the instrument come to life at the touch of a celebrated musical magician.

Opening the recital with Bach’s Toccata in D Major (BWV 912), Mr. Vinikour quickly proved that it would indeed be a magical evening.  Probably composed in 1707 or 1708 but not published until 1843, the D-Major Toccata is typical of the music that Bach composed during his tenure as organist at Divi Blasii in Mülhausen, a time that included his marriage to his first wife and the births of several of his children.  The keyboard music of Bach invariably requires complete technical mastery and rhythmic precision, and Mr. Vinikour delivered both of these qualities with imperturbable elegance, shaping the transitions of tempo and contrapuntal elements of the music with an almost rhapsodic sense of adventure that nonetheless maintained an appropriate adherence to Bach’s complex metrical structure.  Beginning a recital with Bach can be challenging, for both the player and for his audience, but Mr. Vinikour’s choice of the D-Major Toccata was an apt introduction both to the intricacies of his artistry and to the sonic possibilities of the harpsichord, enhanced by the lovely natural acoustic of the Chapel. 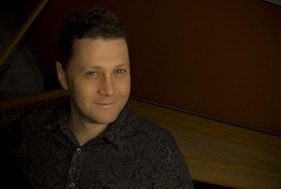 Just as in his operas, Georg Friedrich Händel employed many of the musical forms known to him in his music for solo keyboard, and his G-minor Suite (HWV 432) for harpsichord exploits these forms to draw emotional contrasts through sound.  It was perhaps slightly ironic, then, that Mr. Vinikour’s appearance in Columbia came during a brief break in a Vlaamse Opera production of Händel’s Agrippina in which he was participating.  One of the most noted hallmarks of Mr. Vinikour’s playing is his ability to render the harpsichord an engaging, emotionally stimulating instrument, one which almost miraculously mirrors the warmth of the human voice.  In fact, one member of the audience remarked on her surprise at the dramatic immediacy of the sounds produced by Mr. Vinikour’s playing, which were contrary to her notion of the ‘tinny’ sounds often heard from harpsichords.  Händel’s G-minor Suite is representative of the composer’s work at its most inspired, and the composer’s inspiration drew from Mr. Vinikour inspired playing.  Mr. Vinikour’s virtuosity shone brilliantly in the Ouverture, Allegro, and closing Passacaglia, and the poise that he brought to the central Sarabande was profoundly touching.  Stylistically, Mr. Vinikour’s playing exhibited an attention to phrasing that revealed the innate eloquence of Händel’s music.

The selections from Jean-Philippe Rameau’s Pièces de clavecin seemed tailor-made to highlight the possibilities of the harpsichord at hand.  Mr. Vinikour charmingly evoked birdsong in ‘Le Rappel des Oiseaux’ and the Arcadian ambiance of ‘Musette en rondeau.’  ‘Rigaudons,’ ‘Tambourin,’ ‘L’Entretien des Muses,’ and ‘Les Tourbillons’ received from Mr. Vinikour performances that fully realized the individual characters of each movement but integrated each piece into a satisfying musical whole.  Most delightful for the audience was Mr. Vinikour’s performance of ‘Les Cyclopes,’ a dazzling display of easy virtuosity that filled the chapel with cascades of sound and provoked expressions of awe.

The enthusiasm of the audience was rewarded with two encores, the first of which was Domenico Scarlatti’s Sonata in D Major (K. 96), a bracingly martial piece that received a performance fantastically attuned to its implicit drumbeats.  The second encore was François Couperin’s intriguing ‘Les Barricades mistérieuses’ from the VIth Ordre de Clavecin.  Music historians have not yet determined to which ‘mysterious barricades’ the title refers, with theories ranging from musical barriers to more salacious impediments, but there was no questioning the relish with which Mr. Vinikour played the piece.  It was a fittingly barnstorming finale to a tremendously impressive recital.

Few things in music are more refreshing than attending a performance that entertains and enlightens the audience in equal measures, and Jory Vinikour’s performance in Columbia was just such a performance.  Hearing a well-built, wonderfully-improved harpsichord played by a true master of the instrument was an additional gift to the congregation of Ebenezer Lutheran Church, one which was not taken for granted by those who were fortunate enough to enjoy it.  Hearing Mr. Vinikour’s vibrant, exhilarating playing brought to mind the recollection that many of the Rock ‘n Roll artists of the 1960s and 1970s employed harpsichords on their studio albums.  This perhaps seems a bizarre juxtaposition with a recital of music by Bach, Händel, Rameau, Scarlatti, and Couperin, but it is likely that anyone who attended this performance would agree that it was a recital that rocked. 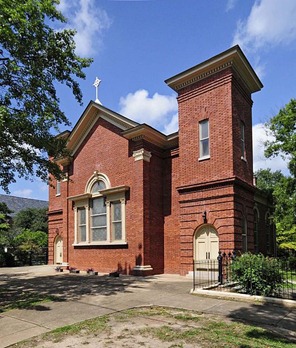 The author’s heartfelt gratitude is extended to the Ebenezer Lutheran congregation, and especially to Cantor Thomas White, for their incredible kindness and hospitality.