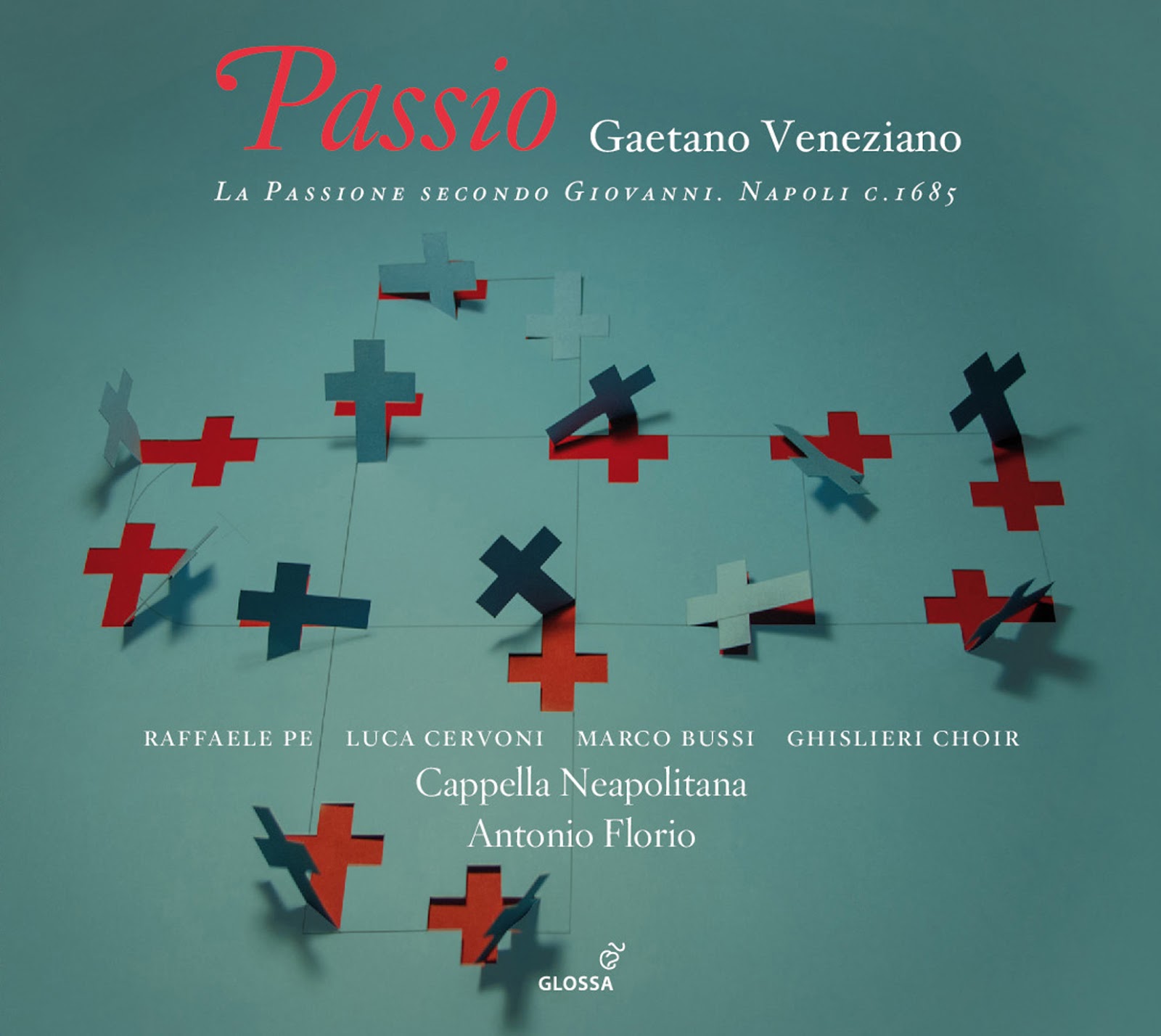 For every work that clings to a place in the international repertory there are countless others that are neglected, forgotten, or lost. This is especially true of musical settings of scriptural accounts of and responses to the Passion of Christ. From the earliest unions of words and music, the persecution, death, and resurrection of Christ have been themes that engage the imagination, the parallels among Christ’s suffering, the tribulations endured—and perpetrated—by the Church, and man’s daily struggles inspiring artists to seek in music modes of expression for sentiments too ephemeral for words alone. From the medieval courts of Europe to the studios of Twenty-First-Century composers, music exploring the anguish of Christ’s crucifixion and the hope of the resurrection has occupied the creative energies of many artists, but it is no exaggeration to assert that the Passion music of Johann Sebastian Bach has not unjustly garnered prominence that casts shadows from which other scores toil, often futilely, to emerge. The prevalence of Bach’s fleet, viscerally exciting Johannes-Passion and compellingly profound Matthäus-Passion in Eastertide performance schedules leaves little time for the Passions of Heinrich Schütz, Johann Mattheson, and Georg Philipp Telemann, all more widely influential in the first half of the Eighteenth Century than Bach’s Passions. Händel’s Brockes-Passion remains lamentably under-appreciated, and even his Messiah, Parts Two and Three of which deal with Christ’s trial, execution, and resurrection, is often inexplicably scheduled for performance only in the Christmas season, especially in the USA. Aside from a pitifully small handful of works by Alessandro Scarlatti, Vivaldi, Pergolesi, Jommelli, Salieri, Paisiello, and Cimarosa, known but rarely performed, Italian Passion music is one of the least-explored niches of Classical Music. From this perspective, Glossa’s recording of Antonio Florio’s new performing edition of Gaetano Veneziano’s little-remembered Passione secondo Giovanni is especially treasurable, but a recording as fine as this one is welcome from any point of view. Given an opportunity of this artistic magnitude to make the case for its renaissance, Veneziano’s music brings John the Apostle’s harrowing recounting of his beloved master’s last days among men to poignant, devoutly melodious life in a performance that makes the more than three centuries of silence to which the score has been subjected all the more mystifying and exasperating.

Born in Bisceglie in the Apulia region of southeastern Italy in 1656, Gaetano Veneziano is now little more than a footnote in musicological tomes documenting the progress of Italian vocal music from the stylistic bellwethers Monteverdi, Cavalli, and Frescobaldi to the High Baroque of Alessandro Scarlatti, Benedetto Marcello, and Vivaldi. A pupil of Francesco Provenzale at Naples’s Conservatorio Santa Maria di Loreto, where he was named maestro di cappella in 1684, Veneziano was sufficiently respected as a composer of sacred music to later be selected as Alessandro Scarlatti’s replacement as director of the Spanish Viceroy’s Capilla Real in Naples—a post from which politics ousted him after only three years when the Austrian Hapsburgs wrested Naples from their Spanish cousins’ control. Early in his Neapolitan tenure, likely in 1685 [the year of Bach’s birth, appropriately enough], Veneziano composed his Passione secondo Giovanni for his adopted city, where he died in 1716. Whether the work, scored for soloists, a choir of nine parts, strings, and basso continuo, was intended for performance by Conservatorio Santa Maria di Loreto personnel is a matter of conjecture, but the dual intimacy and splendor of the edition and performance prepared by Florio suggest that Veneziano’s music would prove uniformly effective in academic, ecclesiastical, or theatrical settings.

The Passione is an intriguingly multi-faceted work, pockets of fiorature in the style of Provenzale mingling with pages of blossoming lyrical expression; and in that vein as much an intersection of old and new styles as Pergolesi’s Stabat mater. Following Florio’s lead, the musicians of Cappella Neapolitana play with technical acumen that never supersedes the beauty of the sounds that they produce. Organist Carlo Barile, harpsichordist Patrizia Varone, and theorbists Franco Pavan and Paola Ventrella collaborate to fashion a basso continuo that is a vibrant organism within the drama. They create a foundation upon which Florio and the strings—violinists Alessandro Ciccolini, Marco Piantoni, Rossella Pugliano, and Matteo Saccà, violist Rosario Di Meglio, cellists Jorge Alberto Guerrero and Adriano Fazio, and double bassist Giorgio Sanvito—create a stunningly beautiful aural edifice, the sounds of their instruments often eerily replicating the moods of the Latin text. It is expected that Florio’s knowledge of and affection for the Passione should be extensive, but the organic cohesion and unflagging drive of his pacing of this performance are admirable in any context. Aided by his cast and chorus, several of whom adhere to Baroque practice by singing solo and choir parts, Florio translates his zeal for revitalizing this score into a performance that, even on disc, exudes a deeply visceral commitment to musical storytelling.

In the introduction to the Gospel that begins the Passion, ‘Passio Domini nostri Jesu Christi,’ it is immediately apparent that the Evangelista will face very demanding music and that countertenor Raffaele Pe will meet every demand unflinchingly. Articulating the words of the Apostle, Pe’s effortlessly-projected voice traverses the range of the music with chameleonic colorations rarely heard in a male alto’s singing. When joined by the sensitive but virile Christus of tenor Luca Cervoni and the chorus in ‘Iesus itaque sciens omnia,' Pe’s Evangelista interacts with his colleagues with far greater immediacy than many Evangelists in Bach’s Passions, participating in the events that are unfolding rather than uninvolvedly reciting Scripture. With the bass incarnations of Christ in Bach’s Passions prominent in the mind’s ears, a tenor Christ is a novelty, and Cervoni’s sympathetic portrayal is characterized by ingratiatingly full-toned but stylish singing. The Ghislieri Choir singers—sopranos Valentina Argentieri, Marta Redaelli, and Sonia Tedla, altos Isabella Di Pietro and Marta Fumagalli, tenors Michele Concato and Paolo Tormene, and basses Renato Cadel and Renato Dolcini—also dedicate their throats and their intellects to serving the needs of the drama, enhancing the performance with utterances that have the impact of chorus interjections in Greek tragedy.

Cervoni’s singing lends ‘Mitte gladium tuum in vaginam’ wonderful momentum, and Pe again delivers the Evangelista’s lines with astounding beauty of tone and a degree of technical accomplishment as near to perfection as is imaginable in such challenging music. Emerging from the chorus, Argentieri and Dolcini provide a dangerous account of the Ancilla’s accusation and a wrenching statement of Simon Petrus’s first denial of Christ. Pe phrases ‘Stabant autem servi et ministri’ with anxious intensity, the focus of his tone imparting the Apostle’s sense of foreboding, and his subtle but nuanced expressivity is matched by Cervoni and Dolcini. Cervoni voices ‘Si male locutus sum’ with refinement, but Argentieri’s reading of the Servus’s denunciation of Simon Petrus introduces a disquieting menace that erupts in Dolcini’s pained fulfillment of the prophecy of his threefold denial of Christ. The choristers again execute their parts with spot-on musical and dramatic instincts.

Bass Marco Bussi’s dark-grained timbre renders his Pilatus easily discernible, but he shares Pe’s gift for insightful inflection though, not inappropriately for Pontius Pilatus, his vocalism is less polished than his colleague’s. Bussi unleashes an unmistakable arrogance in ‘Quam accusationem affertis,’ openly challenging Christ and seemingly reveling in his character’s feeble but insurmountable authority. Singing with the unperturbed grace of undiminished faith, Pe’s Evangelista imparts to the listener that, for all of his self-conscious regality, Pilatus is merely playing the part meant for him by divine will. Here and in ‘Et dabant ei alapas,’ Pe, Bussi, and the choristers employ both their voices and the words that they sing like brightly-hued tiles in a mosaic, creating a landscape in which Gethsemane and Golgotha are conjured with plaintive credibility. The potency of Cervoni’s enunciation of ‘Non haberes potestatem’ is answered by Pe, the chorus, and Bussi in accents of starkly divergent despair and insouciance, differentiated not by compromising tonal quality but by giving full weight to every word and full expression to every emotion.

‘Ut Scriptura impleretur, dicens,’ the Passione’s closing sequence, in many ways resembles an extended motet for the Evangelista and Christus, a powerful exposition of the individual and universal implications of Christ’s death and resurrection. Pe’s interpretation of the Apostle’s words delves deeply into the man’s, not just the disciple’s, love for his master, but it is the unaffected beauty of his vocalism that reveals the Evangelista’s heart to the listener. Cervoni’s Christus, too, is a portrayal focused on examining Christ’s individuality by singing his music stylishly and straightforwardly. In this performance, Veneziano’s music succeeds as few composers’ works in a similar vein have done at humanizing both Christ and the Evangelist: they are archetypes, of course, but they are not carved-stone icons that sink in seas of symbolism. Owing to the uncommon musical integrity of this performance, they are here what they surely were in life: extraordinary, ordinary men.

Some scholars now question not only whether the Apostle John penned the canonical Gospel that bears his name but also whether such a man actually existed. The Twenty-First Century is an era of doubts of which even Thomas could not have dreamed—if there was a doubting Thomas, that is. Like the plays and sonnets of William Shakespeare, though, is the question of authorship really so important that appreciation of the quality of the work is lessened by uncertainty? Music of the quality of Gaetano Veneziano’s Passione secondo Giovanni speaks for itself regardless of whose words inspired its melodies. Its beauties communicated by a performance like the one lead by Antonio Florio and Raffaele Pe, the only relevant question that should be asked about Veneziano’s Passione is, ‘How can such a consequential score have been so long unheard?’