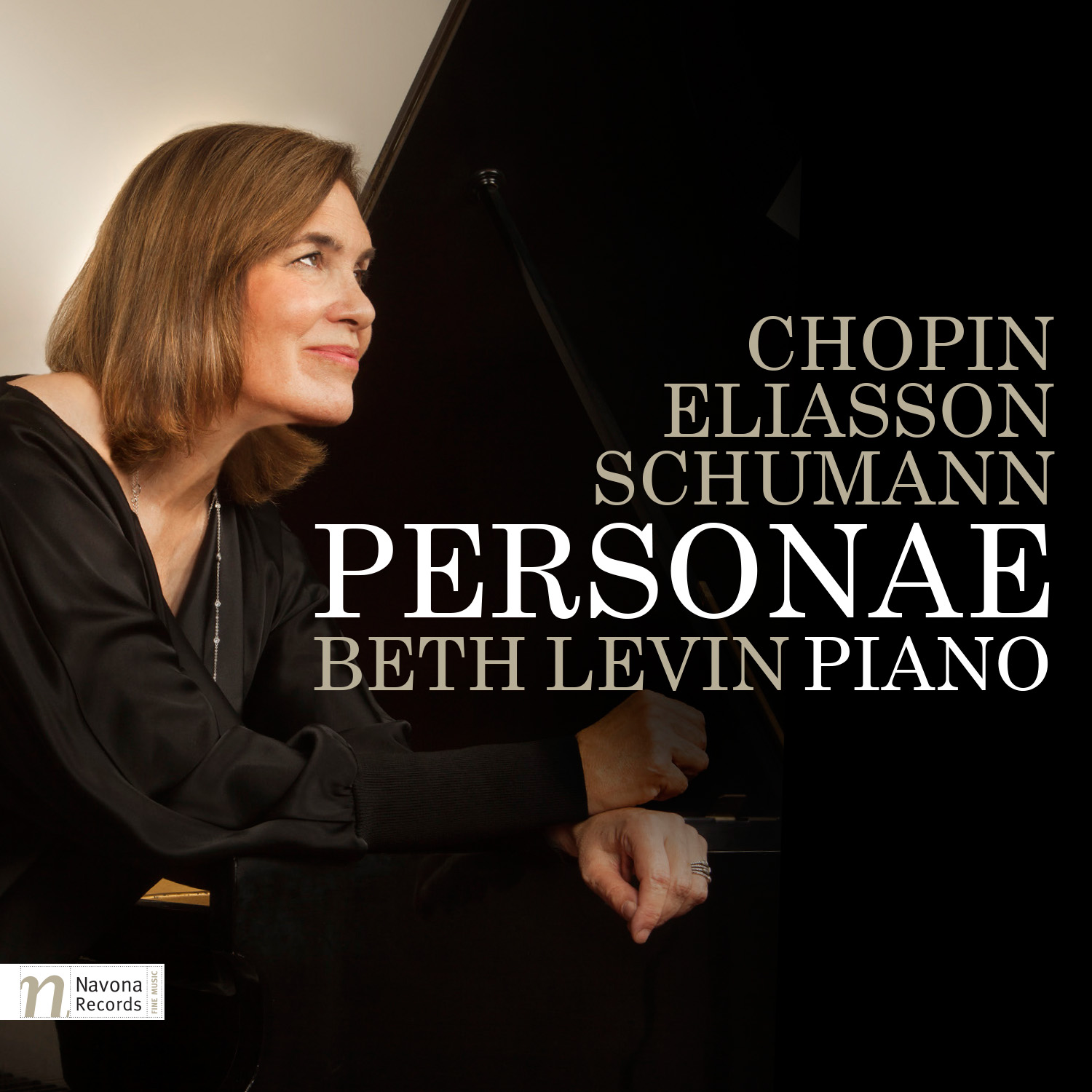 One of the foremost keys necessary to discerning an important pianist from the teeming throngs of people who endeavor to make their living by playing the instrument is the manner in which that key’s significance alongside its eighty-seven siblings is examined, analyzed, and conveyed to the listener. If such an assertion seems to be an exercise in semantics, that is because, as Hamlet might have suggested, knowing not ‘seems,’ it is, but it is nevertheless a logical assessment. The world’s conservatories continue to flood concert stages and recital halls with highly-educated pianists with chrome-plated techniques who play as though they cannot distinguish a ground bass from a gruppetto. When such distinctions are also lost on many audiences, it is too easy to surmise and accept that artistic standards no longer matter. Thankfully, vitally, there are some few artists like Beth Levin and discs of the calibre of her Navona release Personae to remind everyone from the casual listener to the aspiring pianist that important art and artists inevitably distinguish themselves: observers need only have the good sense to surrender to their charms. In the performances of works by Chopin, Schumann, and Eliasson on this disc, engineered by Peter Karl with balance and clarity that replicate the warm acoustic of an intimate recital hall, one of today’s most poetic pianists crafts musical verses that proclaim, ‘The legacy of great pianism is far from dead when fingers such as these still the keyboard tread.’

It is sometimes suggested that aural evidence of Robert Schumann’s struggles with sanity is manifested in his music. Perhaps there is some validity in this assertion, but it is equally valid to argue that the very act of attempting to translate one’s thoughts into musical notation that can be followed by others is madness. Insanity, it has been said, is performing the same action repeatedly with an expectation of different results, but is this not a defining property of artistic endeavor? That Beth Levin’s playing of Schumann is different from other pianists’ is what makes her work unique and markedly elevates the intrinsic merit of Personae. Essentially dances in name only, Schumann’s Opus 6 Davidsbündlertänze—mature works despite the opus number—are vibrant pieces that soar to the euphoric highs and plunge to the despondent lows that characterized the composer’s courtship of his beloved Clara. In the first three of the ‘dances,’ I. Lebhaft, II. Innig, and III. Mit Humor, Levin immediately discloses her uncanny ability to simultaneously pinpoint the vast differences among the pieces and establish and maintain an extraordinary degree of continuity. The extent to which Levin conveys the essence of each individual piece is exceptional, but her ability to identify and perpetuate the parallels among them is a hallmark of an atypically perceptive musician. The next sequence—IV. Ungeduldig, V. Einfach, and VI. Sehr rasch—also reveals surprising breadth of kinship, complemented by the searching treatment that they receive from Levin. Her approach to VII. Nicht schnell is particularly successful, but she plays VIII. Frisch, IX. Lebhaft, and the ingenius X. Balladenmäßig - Sehr rasch with similar effectiveness, the irreproachable rhythmic consistency of her playing lending each number its own expressive microcosm and also links it to its brethren among the Davidsbündlertänze. Most significantly, Levin unaffectedly realizes Schumann’s goal of pacing Davidsbündlertänze as a metaphysical conversation between his much-discussed musical alter egos, Florestan and Eusebius. In XI. Einfach, XII. Mit Humor, XIII. Wild und lustig, and XIV. Zart und singend, the debate rages, points and counterpoints discharged by Levin’s wrists with electric intensity. The final four pieces—XV. Frisch, XVI. Mit gutem Humor, XVII. Wie aus der Ferne, and XVIII. Nicht schnell—are played as thoughtfully as they are powerfully, the pianist’s technique encompassing fingering that enables her to bring off marvels of phrasing that elucidate frequently-overlooked details of Schumann’s impressive musical architecture. Some pianists make the mistake of misinterpreting the title of Davidsbündlertänze and playing the score as though it were a miniature Swan Lake, thereby depriving the work of much of its special cogency. Levin’s performance is perfectly calibrated to the scale of the music, divulging both the inventiveness of Schumann’s music and her incredible skill for playing it.

Playing Frédéric Chopin’s Sonata No. 2 in B♭ minor (Opus 35), often called the Funeral March owing to its emblematic third movement and the prevailing sobriety of the Sonata as a whole, is a pianist’s equivalent of singing the Götterdämmerung Brünnhilde. The opening movement, Grave – Doppio movimento, demands the concentration of a prize fighter: if the pianist loses focus for a moment, Chopin’s music will leave her breathless and embarrassed on the mat. Levin’s playing of the movement combines the near-operatic phrasing of Ivan Moravec with the pragmatism of John Ogdon, but her reading is very much her own. Her handling of the Scherzo shudders with aggression masquerading as broad humor, and the rhythmic precision of her performance never jeopardizes the elasticity of her emotional response to the music. It is here especially difficult to believe that all of the music on Personae was recorded in a single day: few performances edited from material recorded in multiple sessions reach the levels of technical and sentimental mastery of the music that Levin exhibits. She plays the bel canto Marche funèbre: Lento with unexaggerated sincerity, finding Chopin’s tempo and dynamic markings liberating rather than confining. In the final movement, Finale: Presto, the pianist consistently places principal emphasis on the music itself rather than her playing of it, meeting Chopin’s requirements with unperturbed dignity. This is an account of the Sonata projected not to the last row of a recital hall but to each listener’s singular sensibilities, both engaging and empowering the hearer’s imagination. With her performance of the Sonata on Personae, this Brünnhilde of the keyboard earns her arms and armor.

Published in 1987 and first performed in Stockholm in 1988, Swedish composer Anders Eliasson’s Disegno 2 for piano solo is a mature but exploratory work, roughly contemporary with several of the larger-scaled pieces for which Eliasson is most known. The composer’s innovatively contrapuntal idiom is always apparent, but this is audibly the music of an artist still grappling with the collisions of centuries-old formulae with trends in late-Twentieth-Century avant-garde composition. It is a gift for pianists with the technical competency necessary to navigate its difficulties and interpretive insights sufficient to face its evocative nuances head on. Levin brings precisely these qualities to her playing of Disegno 2, her performance highlighting the cleverness of the piece’s construction. The ears are always lured to the primary subject as Eliasson surely intended, but none of the music’s inner voices can complain of being unheard. Perhaps most surprisingly, Levin’s execution of Disegno 2 causes Eliasson’s music to seem a wholly appropriate bridge between the works by Schumann and Chopin.

That Personae is a valuable release is evident from the first bars that issue from it. That it is a disc of rare interpretive insight and technical achievement becomes more evident with each subsequent bar. There are legions of pianists capable of accurately playing notes, but only true artists lift music from the page and give it life that becomes a part of the listener’s community of musical experiences. It seems counterintuitive to state that an artist should carve her own path within the landscape of traditions and methodologies because individuality is such an inalienable component of art, but the work of so many of today’s pianists suggests that they are taught that, like far too much of modern education, the interpretation of music is a conveniently finite, multiple-choice undertaking; not so Beth Levin’s profoundly personal playing on Personae. Emily Dickinson wrote that ‘Success is counted sweetest / By those who ne'er succeed.’ As this disc plays, the sounds of true artistry at the piano fall all the more sweetly upon ears so unused to encountering them.