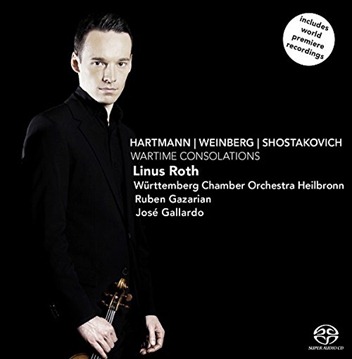 No matter how many discs one hears in the course of a week, a month, a year, or a lifetime, there are occasionally discs that one immediately recognizes as special, discs to which one turns again and again, always sensing that they are significant, sometimes universally and sometimes individually, in ways that the vast majority of recordings cannot emulate. There are performances like Pau Casals’s Bach recordings that are now perceived as hopelessly unstylish but nonetheless possess a magnetism and an abiding musicality that are never outmoded. There are performances like Kirsten Flagstad’s Fricka in the DECCA Das Rheingold that are indispensable in spite of—or perhaps because of—flaws. There are performances like Arthur Rubinstein’s Chopin recordings that forever alter perceptions of the interpretive relationships among composers, musicians, and instruments. In the context of today’s Classical recording industry, what Dickens might justifiably have described as at once the best of times and the worst of times, a disc like violinist Linus Roth’s Wartime Consolations is a much-needed oasis of pure oxygen—and, indeed, an oasis and not a mirage that ultimately disappoints—amidst a smog-smirched desert clouded by a continuing sandstorm of aimless recordings of over-exposed standard repertory. For all their attractiveness and perhaps even necessity in the marketing of recordings, thematic concepts are a deceptive danger to artistic achievement. Too often, the drive to partner works that adhere to an unifying concept produces programmes of poorly-matched music and haphazard performances: pairing two pieces on a themed disc solely because of their relationship to a common concept, ignoring the quality and stylistic symmetry of the music and artists’ ability to perform it, defrauds composers, musicians, and listeners. Exploring the shared associations of music for violin by Karl Amadeus Hartmann, Mieczysław Weinberg, and Dmitri Shostakovich, Wartime Consolations establishes a template for insightfully-planned and meaningfully-executed concept discs. As in so many aspects of Music and Art in general, ego cannot sustain a recording, however intelligently planned. Only fervor born of understanding, preparation, and acquiescence to the power of the music at hand can do that, and in the discerningly-chosen music on Wartime Consolations Linus Roth’s fervor hoists this disc into the company of those special recordings that educate and enchant in equal measures.

​Born in Munich in 1905, Karl Amadeus Hartmann was a pupil of Anton Webern and Joseph Haas, himself an accomplished composer and a fearless champion of music banned by the Third Reich. Following the example of his mentor Hermann Scherchen, who relocated to Switzerland and refused to conduct in his native Germany during the Second World War, Hartmann forbade performances of his music in Germany whilst the Nazi regime remained in power. Composed in 1939, the work that would eventually be known as his Concerto funebre was first performed by violinist Karl Neracher in 1940: after undergoing minor revisions by the composer, the piece was premièred in its final form in 1959 by acclaimed violinist Wolfgang Schneiderhan, husband of the great soprano Irmgard Seefried. Playing the 1703 Antonio Stradivari violin that belonged in the Nineteenth Century to French violinist and composer Charles Dancla, Roth phrases the violin solo in the concerto’s first movement, Introduktion (Largo), with boundless imagination, contrasting the confidence of the solo line with the agitation in the orchestra, sonorously imparted by conductor Ruben Gazarian and the musicians of the Württemberg Chamber Orchestra Heilbronn. Hartmann often ventures to the boundaries of tonality but stops short of diving headlong into the dodecaphony of Schönberg and Webern, utilizing an individual musical language that proves to be a native tongue for Roth. He responds to the broad construction of the Introduktion with a controlled expansiveness wholly appropriate to the soloist-centric nature of the music. Under Gazarian’s sympathetic baton, the uncertainty that permeates the Adagio lurks just beneath the surface, Roth’s subtle playing washing over the restless accompaniment with the stilling effect of twilight on rough seas. In the Allegro di molto, soloist and orchestra spar urgently, the immediacy of the solo line complemented by the disquieting agitation in the orchestra. Roth, Gazarian, and the Württemberg players interact as though engaged in mortal combat conducted in chamber music. The thematic material of the closing movement, Choral (Langsamer Marsch), is derived from ‘Unsterbliche Opfer,’ a German song of remembrance to which Hartmann was likely introduced by Scherchen, who made its acquaintance whilst in Russia during the First World War. Shostakovich also used the melody in his Eleventh Symphony, an homage to the victims of the Revolution of 1905. In Hartmann’s setting, the tune undergoes a transformation from an elegy for victims of conflict into a statement of unconquerable hope. Roth finds in the arching, lyrical lines of his part music to which his faultless intonation, superb legato, and understated vibrato are ideally suited. It is lamentable that playing beautifully is often not esteemed as an element of virtuosity as it deserves to be: the gorgeous tones that Roth draws from his violin are certainly a prime trait of his superlative technique.

So great is his love for the Warsaw-born composer’s music that Roth facilitated the establishment of the International Mieczysław Weinberg Society with the goal of remembering, promoting, and celebrating this neglected master and the legacies of suffering and survival that shaped his artistry. The depths of the violinist’s advocacy for Weinberg’s music are never more apparent than when he plays works like the Opus 42 Concertino. Completed in July 1948 during a holiday that, like Mahler’s retreats to Steinbach am Attersee, enabled the composer to temporarily shed his melancholic sophistication amidst the impersonal equality of nature but never performed in Weinberg’s lifetime, the Concertino taps a stratum of guardedly optimistic lyricism. In the Allegretto cantabile first movement, Roth and Gazarian again cooperate with remarkable symbiosis, the subtle accents of the violinist’s playing answered by similar emphases in the orchestra. The central movement, Cadenza (Lento – Adagio), bristles with uncomplicated tunefulness that Roth translates into compelling assertions of humanity. The taxing solo writing in the ​Allegro moderato poco rubato final movement is supported by surprisingly simplistic orchestral accompaniment, delivered by the Württemberg musicians with impeccable ensemble. The spellbinding pyrotechnics display of Roth’s playing is an outstanding finale to a work that should be performed far more often.

Weinberg’s Rhapsody on Moldavian Themes (Op. 47, No. 3), originally composed for orchestra alone and performed here in an arrangement for violin and orchestra by violinist and composer Ewelina Nowicka, was written in 1949 and can be viewed as a piece intended to conform to the burgeoning effort to celebrate the USSR by assimilating the folk musics of constituent nations into the sanctioned concert works of the Soviet state. This apparent bow to Soviet dictates was a ruse, however: the themes rhapsodized by Weinberg are Moldovan in name only, their origins being in the ethnic Jewish community rather in a defined nationalistic vein. Being Jewish themes, it is hardly surprising that they are splendidly tuneful or that Weinberg dealt affectionately with them. Alongside the Symphonies and works like the Concertino, the Rhapsody is a lighter, sunnier piece. Perhaps this, too, is an element of its purposefully placatory constitution. Roth reacts as energetically to Weinberg’s brighter idiom as to his bleaker Concerto and chamber music for violin, previously recorded for Challenge Classics. The appealing melodies are sensitively but stirringly rendered by Roth, who plays the Rhapsody not as a frivolity but as a little-known vista of an atypically untroubled episode in Weinberg’s creative life.

Like Franz Schubert’s Eighth Symphony—or the Seventh, if one prefers: modern society cannot agree even on a matter such as the numbering of a symphony—and Ernest Hemingway’s The Garden of Eden, Dmitri Shostakovich’s Unfinished Sonata for Violin and Piano is a work that possesses tremendous expressive power even in its limbless form. The single Moderato con moto movement, composed only days after the end of World War II in 1945 and here recorded for the first time, is a profoundly personal piece, roughly contemporaneous with the composer’s extroverted, diaphanous Ninth Symphony. Collaborating with Argentine pianist José Gallardo, Roth’s playing immediately gets at the heart of Shostakovich’s music, and violinist and pianist manage to convey a full spectrum of emotions in the course of the five-and-a-half minutes of surviving music. Indeed, the completeness of their performance of the Moderato con moto mitigates the regret that Shostakovich never finished the Sonata.

The music of Karl Amadeus Hartmann, Mieczysław Weinberg, and Dmitri Shostakovich performed on Wartime Consolations illustrates the capacity of Art to alleviate the anguish of the darkest periods in human history. Seventy years after the end of the Second World War, the unparalleled destruction of those horrific years are still felt. They are felt in Linus Roth’s playing on this disc, but this is music-making that heals the wounds of war and its aftermath. The work of one of the Twenty-First Century’s most perceptive artists, Wartime Consolations is a fittingly tender tribute not only to three important composers but also to happy memories of the family, friends, and colleagues they—and we all—lost to inhuman aggression.