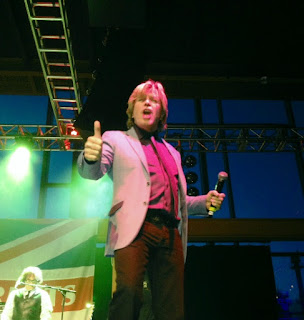 Musicians and especially those of us who write about music with affection and advocacy are prone to taking ourselves too seriously. Certainly, as a young singer I had the focus of a Nicolai Gedda but the voice of a Florence Foster Jenkins. There are instances in which music is and should be pure and simple fun, however. Performances by Herman's Hermits starring Peter Noone are just that: tremendous fun that refuses to leave frowns on the faces of any listeners. The band's concerts are as much reunions as they are musical events, patronized almost anywhere in the world by denizens of the 'Noonatic' fold who have followed the charismatic frontman Peter Noone since Herman's Hermits first topped the charts in the 1960s. Few people in the near-capacity audience on a beautiful late-Spring Thursday evening in the Musikfest Café at ArtsQuest at Steel Stacks in Bethlehem, Pennsylvania, a fantastic, state-of-the-art venue in a converted section of the storied Bethlehem Steel foundry, were thinking critically about the quality of the performance, but the band's dedication to excellence merits consideration. The evening's humor and high spirits did not obscure a consummate professionalism that pervaded even the show's most light-hearted moments. Noone and his band are unwaveringly attentive to keeping musical standards high, but their collective goal is not reaching the last row of Carnegie Hall. Rather, the aim of a Herman's Hermits starring Peter Noone performance is to recapture the innocent elation of an era in which ego and the cult of celebrity were only just beginning to edge out true talent. With every musical dart fine-tuned, at ArtsQuest they hit the bullseye.

Listeners hearing Noone 'live' for the first time—or for the first time after a long absence—are apt to be surprised by hearing him sounding in 2015 so similar to how he sounded on records, on television appearances, and in concert in the '60s. A product of a musical family, the Mancunian Noone is the atypical pop star of his era who, after achieving fame with hit records and cinematic rôles, acquired the solid technical foundation that enables him to sing his repertory with the familiar boyish timbre and flair—and in the original keys—heard on his classic records. Noone often jokingly refers to Herman's Hermits starring Peter Noone as an ‘Oldies but Goodies’ group, but the regrettable fact is that many of his colleagues from the '60s British Invasion scene can no longer claim the 'goodies' half of that designation. Noone is also quick to remind today's audiences that the gems of the Herman's Hermits songbook were never intended to be musical manifestos laden with symbolism and encoded messages. The songs are uncomplicated, tuneful romps through the concerns of youth, and this is how Noone sings them. That he sings them so captivatingly is evidence of his dedication to his craft and the shrewdness and technical acumen with which he has cared for the voice throughout a career that has taken him not only to every imaginable setting in which Rock 'n Roll is heard but also to Broadway and West End stages.

Following a mostly enjoyable opening set by The Large Flowerheads, Herman's Hermits starring Peter Noone took the stage with one of their signature numbers, 'I'm Into Something Good,' embarking on a ninety-minute tour of highlights of the band's catalogue notable for its unflagging energy and toe-tapping musicality. Strong accounts of perennial favorites like 'Leaning on a Lamppost,' 'Can't You Hear My Heartbeat,' 'Mrs. Brown, You've Got a Lovely Daughter,' and 'I'm Henry the Eighth, I Am,' illuminated by the sunny timbre of 'Herman himself,' alternated with less-frequently-heard material like the brilliant 'Hold On,' sung with gusto by Noone, whose voice soared in the song's high lines. In every number, Noone received splendid support on guitars and vocals—and spiffy dance moves, as well—from Vance Brescia and Billy Sullivan, both gifted performers and songwriters in their own rights. Brescia's high-kicking stage antics heightened the playful atmosphere of the show, and as both a guitarist and a singer there seems to be almost nothing beyond his abilities. Sullivan's guitar licks have restored some of the defining sounds familiar from the original Herman's Hermits recordings but missing from previous incarnations of Noone's traveling troupe. Also a talented tunesmith, Rich Spina tore into the keyboard riffs in ‘Sea Cruise’ with vigor to rival Jerry Lee Lewis in his prime. The rhythmic heart of the band is native Pennsylvanian Dave Ferrara, who, simply put, is one of the best drummers in the business. It is easy to underestimate drummers' significance to bands until hearing a great one at work, and Ferrara's mastery of the drum kit contributes indelibly to the pulse-quickening vitality of this band's performances.

After offering rollicking traversals of 'Love Potion Number Nine' and 'Wonderful World,' Noone convincingly sharpened the edge of his vocal storytelling in a stirring rendition of the angst-filled ‘A Must to Avoid,' taking the last-stanza modulation in stride. His management of the high tessitura of the ballad ‘Listen, People' was especially confident, and his assured readings of 'Silhouettes,' 'No Milk Today,' and 'The End of the World'—regularly cited as his personal favorite among the many songs recorded by Herman's Hermits—rightfully impressed the audience. In these songs, the wonderful condition of Noone's voice was particularly apparent. Except in terms of increased strength, cultivated through the acquisition of a solid education in the art of husbanding vocal resources, Noone's voice is little touched by time. The sole disappointment of the band's glowing performance of 'There's a Kind of Hush' was that it brought the show to a close.

It is disheartening for those who appreciate music of diverse genres to observe how few of today's recording artists truly warrant having the term artist associated with them in any context. Every era in musical history has had its showmen and its shams, competing artists and peddlers of artifice. Whether in opera or Rock 'n Roll, the performers deemed important artists have rarely been those who merely occupy a space upon a stage and emit streams of perfect tone. The true artist demands perfection of himself and his colleagues, but the essence of artistry is not a pursuit of perfection. There are occasional missed notes and flubbed words in Herman's Hermits starring Peter Noone performances. Charlatans blame colleagues' foibles, audience distractions, sound technicians, and a thousand other circumstances of live performances. Peter Noone and his band members revel in sharing with an audience the experience of real, live music, not the clinical perfection of cardboard 'recording artists' who only laugh if doing so is included in their scripts and approved by their PR handlers. Whether hearing Tosca at Covent Garden or Herman's Hermits starring Peter Noone at ArtsQuest, a listener can discern musicians who perform in order to repay their mortgages from those for whom performing is a necessary mode of communication. What an artist has to say need not always be deadly serious: no less meritorious are statements of uncomplicated exuberance that temporarily relieve the stresses of lives that are already too serious. Evolved from a pop star into an entertainer of a quality now all too rare, Peter Noone respects audiences too much to rest on his laurels, but he knows his craft too well to sacrifice his love for performing in a quest for phony pomposity. Combining evergreen vocalism with artistry that drew enthusiastic ovations from his ArtsQuest audience, his was a performance that said, 'Let's forget everything for a while and enjoy ourselves!' 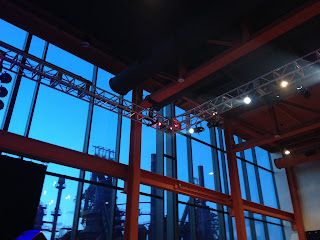 Scene of the crime: the Musikfest Café at ArtsQuest Center at SteelStacks in Bethlehem, Pennsylvania, where Herman’s Hermits starring Peter Noone appeared in concert on 28 May 2015 [Photo from 2014 by the author]