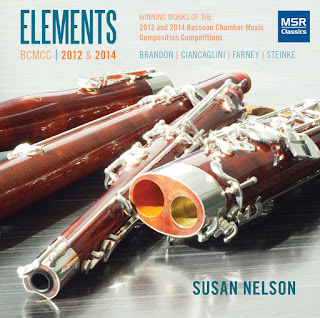 Each instrument in the modern orchestra has its own unique spectrum of tone, timbre, and interpretive possibilities, but that of the bassoon is truly unlike any other. Its voice can be bumblingly funny or groaningly tragic, and its wide compass facilitates its exceptionally varied use in and beyond chamber, symphonic, and operatic repertories. From the mournful obbligato in Dardano's aria 'Pena tiranna' in Händel’s Amadigi di Gaula, the bravura wizardry of Mozart's K. 191 Concerto, and the playful phrases in Puccini's Act One duet for Tosca and Cavaradossi to crucial lines in Ravel's Boléro and Richard Strauss's 1948 Duet Concertino, one of the composer's final works, the capabilities of the instrument have been constantly expanding since the first Baroque bassoons were produced in the Seventeenth Century. A truly great bassoonist is as rare as truly great music composed for the instrument, but MSR Classics' disc Elements benefits from the presence of both. The four composers whose music is featured on the disc, winners of the 2012 and 2014 Bassoon Chamber Music Composition Competitions, represent groundbreaking trends in contemporary composition for the bassoon. The nucleus of the musical atoms on Elements is bassoonist Susan Nelson, an artist whose musical curiosity is obviously almost as extensive as her talent. In the pieces on Elements, she proves herself the mistress of a wide array of styles and a musician with a tremendous gift for meaningful collaboration. The market overflows with recordings of music old and new for piano and violin, but there still are far too few discs celebrating the bassoon and the music inspired by its singular sound. Elements is hopefully the invigorating first step on a journey of exponentially increased recognition for this magnificent instrument.

David Angelo Ciancaglini's 2012 Seikilos Quartet for Oboe, Bassoon, Marimba, and Piano is a work that exudes imagination and a delightful propensity for reshaping centuries-old traditions with both modern idioms and timeless sensibilities. The composer's command of interweaving the timbres of the very different instruments is fascinating, and the Quartet exhibits a melodic fecundity missing from much Twenty-First-Century music. Nelson's expert playing is matched by the sterling efforts of oboist Dr. Nermis Miese and pianist Dr. Solungga Fang-Tzu Liu, but the 'star' of this piece is Dr. Jeffrey Barudin, who plays the marimba with joy that cascades from every note. Ciancaglini's Quartet is well-crafted music, here very well played. The four musicians interact with one another with every hallmark of a practiced camaraderie, trading phrases with the naturalness of conversation. This, in fact, is the essence of the Quartet: in its interplay of ideas among the instruments, the composer fosters a musical conversation in which each participant has an equal voice.

Completed in 2014, Jenni Brandon's Colored Stones for Solo Bassoon is a work in which simplicity evolves into complexity in unexpected ways. Nelson's unimpeachable rhythmic crispness lends the three movements of Colored Stones sharply-contrasted moods that are nonetheless closely related. The stark figurations of 'Smoky Quartz' receive from Nelson resonant executions, her phrasing and breath control as impressive as those of a great singer. In all three movements but especially in 'Lapis Lazuli,' the influence of Ravel is omnipresent, Brandon's manipulations of chromaticism and Jazz-inflected tonal pattens building upon the foundations laid in scores like Boléro and Daphnis et Chloé. The opalescent striations in the titular gemstone are reflected in 'Tiger's Eye,' and the hypnotic overtones of Nelson's playing are enhanced by the rich hues that she coaxes from her instrument, particularly in the earthy bottom octave. If Ciancaglini's Quartet is a conversation, Brandon's Colored Stones is a cheeky soliloquy worthy of Shakespeare's Beatrice.

A setting of Robert Frost's familiar poem, Devin Farney's 2012 Fire and Ice for Soprano, Bassoon, and Piano reunites Nelson with Liu and introduces soprano Jennifer Goode Cooper. Structurally, the piece is not unlike the highly-stylized French Baroque chamber cantatas by composers like Clérambault. Farney sets Frost's words with attention to unconventional nuances of their meaning, demanding unflagging concentration from both performers and listeners. Cooper’s voice is an ideal conduit for the kinetic energy of Farney's music and Frost's text, her scorching upper register offsetting the frigidity of the poet's imagery. Nelson’s playing is again a fount of elegant virtuosity. Liu's pianism is first-rate: she deals with some tricky writing without upsetting the intelligently-wrought balances among instruments and voice. Frost's poetry is difficult to meld with music because the cadences of the language are often peculiar, but Farney's setting of 'Fire and Ice' and this performance of it illuminate the inherent musicality of the poet's verse.

Dedicated to both the victims and the survivors of Hurricane Katrina, Greg Steinke's 2005 Suspended for Bassoon and Strings was inspired, at least in part, by K'os Naahaabii's 1974 poem with the same title. The acerbic sounds of suffering pierce the instrumental writing, but Steinke quells the tense atmosphere with streams of comforting but strangely disquieting tranquility. Nelson is joined in her evocative performance of Suspended by violinists Stephen Miahky and Christina McGann, violist Matthew Daline, and cellist Jacqueline Black. The string players respond to the music with visceral energy, the elongated strands of the music passing among the instruments with ominous fluidity. Against this backdrop, Nelson's playing has the dramatic force of a voice struggling to be heard in a storm-tossed cacophony. The voice's song, suspended in time, is ultimately one of hope and the power of tiny victories to upend immense tragedies. As played by this quintet of musicians, Suspended is also a reminder of music's faculty for communicating emotions that words simply cannot convey.

In the century-long history of recorded music, each decade has produced a handful of recordings via which the boundaries of instruments have been redefined by exceptional musicians. Joining Casals's and Milstein's Bach, Schnabel's Beethoven, and Segovia's Rodrigo, Susan Nelson enlarges and ennobles her instrument's presence on disc. In the case of Elements, this exceptional musician has opportunities to work not only with gifted colleagues but also with recent compositions that proclaim the bright future for contemporary music and that wonderful woodwind behemoth, the bassoon.