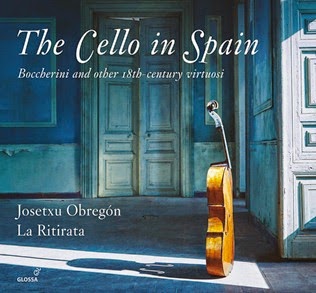 I begin with an egregious but unmalicious act of heresy; or, from the perspective of my fellow violinists, perhaps treason. I have long thought that, if circumstances somehow permitted me to start my musical education anew, I should abandon the violin in favor of the cello. Hearing The Cello in Spain, the new Glossa disc featuring cellist Josetxu Obregón and La Ritirata, has both intensified my love for the cello and reassured me that I was right to have studied the violin: profaning the cello with my poor playing should have been criminal in comparison with what Mr. Obregón and his colleagues achieve on this disc, which Federico Prieto’s engineering gives the holding-one’s-breath ambiance of a live performance rather than that of an antiseptic recording studio. This music, much of which is undeservedly unfamiliar, demands this sort of vitality, and the advocacy that it receives on this disc is extraordinary. Even an imperceptive listener is seldom fooled by empty virtuosity, and there is no ignoring the tremendous dose of corazón that makes this disc so enjoyable. There are technical fireworks aplenty, but the defining quality of The Cello in Spain is passion.

Like so much in the glorious history of music, the lineage of the modern violoncello is open to interpretation. Likely first developed by luthiers working in and near Bologna in the 1660s, the cello was a gradual adaptation of the bass viol and viola da gamba—in short, a product of musical evolution that arose in response to the creation of metal strings that enabled reliable intonation on low pitches on instruments with smaller, more manageable bodies. Standardizations of size and design did not follow until the middle of the Eighteenth Century, after the efforts of makers such as Stradivarius elevated the cello to the level of importance at which it rendered earlier incarnations of the bass violin obsolete. The history of the cello in Spain travelled a course that can be most reliably documented via the music composed for the instrument by artists resident in the country and visiting the Hapsburg and Borbón courts of Seventeenth- and Eighteenth-Century Spain. In the selections on The Cello in Spain, Mr. Obregón and his expert colleagues—Daniel Oyarzabal on harpsichord and organ, cellist Diana Vinagre, Enrike Solinís on Baroque guitar and archlute, Daniel Zapico on theorbo, harpist Sara Águeda, violinists Lina Tur Bonet and Miren Zeberio, violinist and violist Daniel Lorenzo, double bass player Michel Frechina, and master of the castanets David Chupete—recreate with compelling musical narrative the formation of a tradition of composition for the cello that became as central to the artistic life of Spain as writing for the baryton—a bizarre relative of the cello and bass viol—was to Haydn’s composition of instrumental music during his tenure at Esterháza. Informed but never restricted by historically-informed performance practice scholarship, Mr. Obregón and his La Ritirata colleagues transport the listener to the alternately reverent and playful halls of el Escorial with sounds that engage and enthrall as viscerally now as when the composers represented on The Cello in Spain peddled their music to princes and popes.

Born into a musical family in Lucca, Italy, Luigi Boccherini was for much of his creative career in service to Spanish patrons, and his ‘transplanted’ music is now as widely—and more justifiably—associated with Spain as Bizet’s Carmen and Lalo’s Symphonie espagnole. Collaborating with Ms. Vinagre, Mr. Solinís, and Mr. Oyarzabal, Mr. Obregón offers a standard-setting performance of Boccherini’s Cello Sonata in C Major (G.6), his enthusiasm for the music emanating from the energetic reading of the opening Allegro movement. Italianate melodic fecundity and Spanish soulfulness are combined in the lovely Largo assai, and Mr. Obregón revels in the expressivity of the music without diminishing the rhythmic crispness that gives his playing its stimulating power. The Allegro moderato movement also receives from Mr. Obregón a rousing performance of unflagging stylishness. His is the sort of virtuosity that is always secondary to emotional connection with the music: by exploring the sentiments around which the music was woven, Mr. Obregón discloses to the attentive listener the impetus for every musical gesture.

Like Boccherini, Padua native Giuseppe Antonio Paganelli was also an Italian who devoted the last phase of his compositional career to Spain. His Sonata in A minor displays a certain indebtedness to the style of Giuseppe Tartini, with whom Paganelli may have studied, as well as a nod to French models. The dulcet Largo that opens the Sonata is phrased expansively by Mr. Obregón, and his efforts are eloquently seconded by the playing of Mr. Zapico, Ms. Águeda, and Mr. Oyarzabal. The cajoling harmonies of the subsequent Allegro movement are blended with the richness of a traditional paella, and the undiluted feelings of the Adagio are poignantly but unexaggeratedly conveyed by Mr. Obregón. He and his colleagues give a nimble account of the spirited Gigue, its character that of the Gran Vía rather than the Champs-Élysées.

Jean-Pierre Duport and his brother Jean-Louis were pupils of the celebrated French cellist Martin Berteau, credited by many musicologists as the godfather of French cello technique. Both Duport brothers were acquainted with Beethoven in the years after Jean-Pierre’s sojourn in Spain, and the young Beethoven dedicated his Opus 5 Cello Sonatas to Jean-Pierre, who was master of chamber music at the Potsdam court of Friedrich Wilhelm II. Duport’s own Cello Sonata No. 1 in D Major was dedicated to the Duque de Alba, presumably Fernando de Silva Mendoza y Toledo, grandfather of Goya’s muse Doña María del Pilar de Silva, duquesa de Alba. Partnered by Ms. Vinagre and Mr. Oyarzabal, Mr. Obregón whizzes through the Sonata’s opening Allegro movement in a fantastic exhibition of bowing technique, and his mastery of the expansive Adagio is no less thorough. The final Allegro is rendered with consummate skill and obvious exuberance by cellist and his amigos musicales.

Dating from the second half of the Eighteenth Century, the anonymous Adagio in E minor from the Manuscrito de Barcelona is a subdued piece that pulses with the veiled desolation that lurks beneath the surface of so much Spanish music. Mr. Obregón, Ms. Águeda, and Mr. Oyarzabal immerse themselves in the spirit of the music without aggrandizing its moods, playing with perfect intonation and flawless musical teamwork. Mr. Obregón provides a deeply-felt interpretation of the Toccata prima in G major for solo cello by Francesco Paolo Supriano (né Scipriani), a product of the Neapolitan school and the famed Conservatorio della Pietà dei Turchini. He is joined by Ms. Vinagre in a beautifully-conceived performance of Pablo Vidal’s brief but memorable Duetto-Andante from Arte y Escuela de violoncello. Mr. Oyarzabal adds his insightful playing to theirs in a similarly affectionate traversal of José Zayas’s Última lección in B-flat Major from Manuscrito de Barcelona.

Thought to be the only extant example from the set of twenty-four concerti composed circa 1755 by Domingo Porretti, the Cello Concerto in G Major is, in terms of instrumentation, the most substantial work on The Cello in Spain. Its four movements of near-equal duration engender an uncanny symmetry, and this is also reflected in the performance by Mr. Obregón and La Ritirata. The pair of Largo movements are rapturously delivered, the melodic lines caressed by Mr. Obregón with the aura of song. The contrast with the Allegro movements is realized with exemplary artistry, the musicians shining the light of their talent on the colorations in the composer’s score rather than painting the music with artificial hues. If this Concerto is indicative of the quality of its missing brethren, the loss to the concert repertory of the cello is considerable.

A more thrilling finale for The Cello in Spain than the Fandango from Boccherini’s Guitar Quintet in D Major (G.448) could not have been selected. Though he was born in Italy, a half-century’s residency in Spain surely injected a transfusion of the musical sangre de España into Boccherini’s veins, and the resulting metamorphosis of his artistic DNA yielded a piece as quintessentially Spanish as the Fandango. As performed here by Mr. Obregón, Ms. Solinís, Ms. Tur Bonet, Ms. Zeberio, and Mr. Lorenzo, with a brilliant contribution from Mr. Chupete’s castanets, the Fandango evokes the dual freedom and formality, the palmas and pitos, the grit and grandeur of Spanish music and culture.

There are as many ways of describing the unique sonorities of the cello as there are methods of coaxing them from the instrument. Mstislav Rostropovich, one of the preeminent cellists of the Twentieth Century, wrote that he was initially attracted to the cello because its sound was to his ears like that of a voice—a voice that he recognized as his own. The marvel of this disc is that the playing of Josetxu Obregón and La Ritirata empowers the listener to hear the cello as the voice of a nation. The selections on The Cello in Spain and the zeal with which they are played illustrate the urbane roots of Spanish repertory for this four-stringed vessel of the musical soul. Fellow violinists, forgive me: The Cello in Spain inspires me to long to be a cellist—in Spain, por favor.