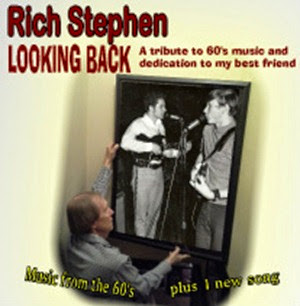 Looking Back: A tribute to 60’s music and dedication to my best friend—Rich Stephen, all vocals and instruments [Recorded in 2014; Private release, DVR 2014; NOTE: Looking Back is not available commercially. All arrangements are the intellectual property of Rich Stephen. Copyrights are held by the original artists and/or songwriters, and no performance rights are stated or implied.]

There are many extremely talented musicians active in all genres of music today, and that is a fact that is acknowledged far too infrequently. Today’s musicians are, on the whole, better educated, better equipped, and better prepared for careers than their counterparts in any previous generation, but this progress is not consistently rewarded with better music-making. The well-schooled musician is not necessarily the well-informed musician, and a musician with a haphazard knowledge of the roots in his own musical garden may achieve technical perfection without ever attaining a level of connection with the life force beyond lyrics and melodies. Whether in recordings of Beethoven piano sonatas, Verdi operas, Mahler symphonies, jazz riffs, R&B ballads, or pop hits, what is sadly so seldom heard on albums now is true, discernible affection for music itself. Clinical precision is perhaps its own kind of love, but it is one that is perceived by the listener only with the greatest difficulty. Where are today’s Dave Brubeck, Eric Burdon, and Glenn Gould, artists whose recordings seemed to say, ‘This is who I am, this is what I do, and if it does not appeal to you, listen to something else’? This is the spirit of Rich Stephen’s Looking Back. This disc is not an egotistical commercial exercise, a stepping stone in a quest for stardom, or a venture with ulterior, non-musical motives. Rich Stephen loves music and the incredible power that it has to immortalize people, places, and emotions in our lives in ways that memories cannot replicate. Looking Back is not meant to be a chart-topping effort from a neglected star singer: rather, it is one man’s journey through songs and experiences shared with friends. That is the purest essence of music and the quality that makes Looking Back a vastly more fulfilling experience than the over-processed endeavors of musicians whose artistic achievements are measured in dollars and cents, not hours with friends and unforgettable jam sessions that no other ears will ever hear.

Providing lead and harmonizing vocals and playing a dizzying array of instruments—Fender Stratocaster, Lead III, and Mustang guitars, Prestige electric guitar, Yamaha acoustic guitar, Ibanez bass guitar, Casio CT-700 keyboard, Kurzweil Mark 3 digital piano, Zoom RhythmTrak RT-123, Olds Ambassador trumpet, Starmaker Garimet cornet, Buescher alto saxophone, and Huang Silvertone deluxe harmonica!—on the cuts on Looking Back, Mr. Stephen takes the listener on a chronological journey through some of his favorite songs from the 1960s. A member of a successful band called The Right Ways, active in metropolitan Chicago during the latter half of the ‘60s, he pays homage to an era that he experienced first-hand during his own musical infancy. Along with his best friend Art Gall (1951 – 2012), to whose memory Looking Back is dedicated, he launched his career as an avid concertgoer in 1965 with a performance by The Beatles—as auspicious an introduction to contemporary Rock ‘n Roll as any aspiring musician might desire. The Beatles medley is one of the most enjoyable tracks on Looking Back. Beginning with a boyishly spirited account of ‘Love Me Do’ (1962), he traverses the too-little-heard ‘Boys’ (1963), previously recorded by The Shirelles in 1960, ‘Slow Down’ (1964), and George Harrison’s tremendous ‘If I Needed Someone’ (1965), also a hit for The Hollies, all sung with heart and surer pitch than is sometimes heard on the original recordings. Mr. Stephen appropriately closes the disc with the The Beatles’ 1965 ‘In My Life,’ one of the finest numbers in the Lennon – McCartney songbook: the combination of wistfulness and optimism in Mr. Stephen’s vocals honors John Lennon’s inimitable style without attempting to emulate it, and he exhibits a winsome lightness of touch in his rendering of Sir George Martin’s Bach-inspired piano ritornello.

Mr. Stephen’s performances of Jimi Hendrix’s ‘Fire’ (1967) and The Doors’ ‘Touch Me’ (1969) incorporate recordings of Art Gall’s vocals from 1989 rehearsal footage, seamlessly integrated into the 2014 tracks. Here, as in The Beatles covers, Mr. Stephen does not attempt to replicate Hendrix’s and Jim Morrison’s unique vocals, but his own singing, combined with the archival sampling of Mr. Gall’s vocals, is rousingly effective. Fellow Illinois band The American Breed’s ‘Step Out Of Your Mind’ receives particularly fresh treatment from Mr. Stephen, his confident performance of the melodic line improving upon Gary Loizzo’s vocals in the original 1967 recording.

Sam Cooke’s 1960 ‘Wonderful World,’ one of the truly emblematic songs of the ‘60s that was also successfully recorded by Herman’s Hermits, is delightfully and imaginatively sung by Mr. Stephen, and he soars through The Drifters’ 1961 ‘Sweets for My Sweet,’ the original recording of which featured a then-undiscovered Dionne Warwick as a backup singer, and Martha and the Vandellas’ 1963 ‘Heat Wave,’ in which he provides Motown styling that Martha Reeves would surely applaud. Mr. Stephen unites his Chicago roots and the British Merseybeat with his performance of The Searchers’ 1963 ‘Sugar and Spice,’ a number-two hit in the UK that was also a success for Illinois band The Cryan’ Shames in 1966, and his accounts of The Zombies’ ‘She’s Not There’ (1964)—a rare minor-key number with which Santana also charted more than a decade later—and The Yardbirds’ rhythm-driven ‘For Your Love’ (1965) confirm his credentials as a razor’s-edge rocker.

Sam and Dave’s 1966 classic ‘Hold On, I’m Comin’’ and Brenton Wood’s 1967 ‘Gimme Little Sign’—a great song now more familiar, for better or worse, via Peter Andre’s later version—give Mr. Stephen the opportunity to flex his impressive soul muscles, and his fantastic rendition of ‘Kind Of A Drag’ (1966) is a brilliant tribute to fellow Chicagoans The Buckinghams. Mr. Stephen’s way with Todd Rundgren’s 1968 ‘Hello It’s Me,’ originally recorded by his band Nazz, revels in the funk vibes that made the song so attractive to Mary J. Blige and John Legend. Musically, the pinnacle of Looking Back is Mr. Stephen’s stirring performance of The Grass Roots’ ‘Midnight Confessions’ (1968), in which his vocals give the arching melody the gleaming freedom it demands but seldom receives. [I heard the then-current incarnation of The Grass Roots perform ‘Midnight Confessions’ in Westbury, New York, in 2013: Mr. Stephen sings it markedly better.] In all of the tracks on this disc, Mr. Stephen adapts his laser-bright timbre to the stylistic nuances of the music without abandoning the singular vocal signature that he imprints on each song, and his skills on all of the instruments at his disposal are splendid.

‘Looking Back,’ the disc’s title track, is Mr. Stephen’s self-penned tribute to Mr. Gall, and it serves both as a moving remembrance of a beloved friend and fellow artist and a fitting overview of Mr. Stephen’s musical upbringing and accomplishments. The song’s hook is immediately alluring, and the depths of emotion that Mr. Stephen conveys in his vocals and accompaniment are evidence of the compelling sincerity of the song’s message. Both its eponymous track and Looking Back as a whole epitomize the ethos missing from so many of the ridiculously-hyped albums churned out by the commercial recording industry. They also remind the listener that one man with a pervasive, unaffected love for music can make a recording that shames the phony efforts of labels with deep pockets and legions of cynical would-be ‘stars.’

To learn more about Rich Stephen and his work as a musician, please visit his website.