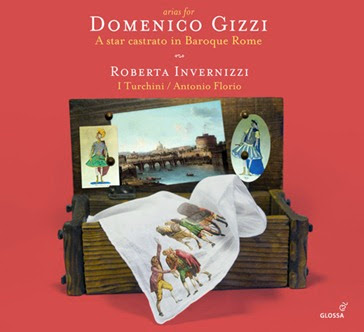 Born in Arpino in the Lazio region of Italy in 1687, Domenico Gizzi is familiar to Twenty-First-Century observers primarily as an acclaimed pedagogue whose pupils included the composer Francesco Feo and fellow soprano castrato and Arpino native Gioacchino Conti, who ultimately adopted the stage name Gizziello in homage to his tutor. It was as a singer that Gizzi conquered the aristocratic and archiepiscopal courts of Italy in the first half of the Eighteenth Century, however, and such were his accomplishments in opera that he could share the stage with his slightly younger colleague Farinelli with equal billing. Possessing a range that extant music composed for him suggests extended at least from C4 to B♭5, Gizzi was a celebrated exponent of a style of singing that in his lifetime was already falling victim to the caterwauling of shallow virtuosi. His own technique was undoubtedly extraordinary, but the high salaries that he commanded are surely evidence of gifts that extended beyond mind-boggling execution of bravura passagework. Indeed, it was for the expressive use of his voice rather than coloratura prowess that Gizzi's artistic namesake Gizziello was most praised during his tenure under Händel's management in London, and at least some of the credit for this must have been owed to Gizzi's example. Now not as renowned as a singer like castrati such as Farinelli, Caffarelli, Carestini, and Senesino, he was esteemed during his time before the public as one of the finest singers in Europe, the peer of the most talented of his colleagues. The thirteen arias on Arias for Domenico Gizzi – A star castrato in Baroque Rome, all of them extracted from operas that figured in Gizzi’s Roman career, facilitate the creation of a portrait of a singer who was obviously adept at delivering vocal pyrotechnics and evincing the emotional contexts that instigate them. Italian soprano Roberta Invernizzi is also such a singer, and she summons Gizzi’s spirit in this performance with singing of taste and pizzazz. He was unquestionably an important teacher, but if he sang these arias as well as Roberta Invernizzi sings them on this disc, he was indeed a true ‘star castrato.’

Ms. Invernizzi is one of the most stylish singers making a home in Eighteenth-Century repertory today, and her performances on this disc match the highest levels of achievement in recreating music composed for castrati. She is supported with elegance that complements her own poise by the superb musicians of I Turchini: concertmaster and noted musicologist Alessandro Ciccolini; violinists Patrizio Focardi, Paolo Cantamessa, Marco Piantoni, Claudia Combs, and Massimo Percivaldi; violist Rosario Di Meglio; cellist Alberto Guerrero; double bassist Giorgio Sanvito; and harpsichordist Patrizia Varone. Under the leadership of Antonio Florio, they give surprisingly robust performances of the Sinfonie from Alessandro Scarlatti’s 1718 Telemaco and Domenico Sarro’s 1720 Ginerva principessa di Scozia, proving that size of ensemble is not as important as the breadth of the interpretation. In each of the arias on the disc, Maestro Florio and I Turchini concoct a musical atmosphere that fosters the adventurous expressivity of Ms. Invernizzi’s singing. Ms. Varone’s harpsichord continuo is noticeably free of the over-complicated meandering that is often billed as period-appropriate continuo realization, and this closer adherence to stylistic accuracy as it is presently understood is considerably more imaginative than more fanciful efforts. Mr. Ciccolini has an exceptional historically-informed bowing technique but likewise lacks nothing in passion. Following Ms. Invernizzi and Maestro Florio with flawless attention, the instrumentalists produce sounds that seem extensions of the singer’s voice. In Rome at the time of Arcangelo Corelli’s reign as the Eternal City’s presiding instrumental genius, Gizzi likely enjoyed the finest musical support available in Italy: in a project in which nothing was left to chance, Ms. Invernizzi can make a similar claim in the context of this disc.

A tendency to accentuate the downbeats in coloratura passages notwithstanding, Ms. Invernizzi’s performance of Mirene’s aria ‘Amore inganna, e piace’ from Giovanni Bononcini’s 1719 L’Etearco is a magnificent feat of Baroque singing, the divisions tossed off with élan and the vowels on the breath as they must be in music of this nature. Insightfully used to her advantage, occasional edginess at the top of the range sharpens the focus of Ms. Invernizzi’s phrasing. The same character’s aria ‘Barbari siete, o Dei,’ perhaps the finest single piece on the disc, is engrossingly sung, the greater simplicity of the melodic line prompting Ms. Invernizzi to singing of engaging subtlety.

The pair of beautiful eyes evoked in the text shine like sapphire pools in winter sunlight in Ms. Invernizzi’s expansively-shaped singing of Farnace’s aria ‘Per due pupille belle’ from Giovanni Battista Costanzi’s 1730 L’Eupatra, and the wide intervals in Pirro’s ‘Prima 'l vorace fulmine,’ the first of the two arias from Francesco Feo’s 1730 Andromaca included on the disc, are negotiated with consummate artistry. In all of the selections on Arias for Domenico Gizzi, Ms. Invernizzi’s ornamentation is bold without being vulgar, and she makes frequent use of the bright sheen of her upper register in a manner that avoids taking the voice out of the range that was likely comfortable for Gizzi. Pirro’s subsequent aria ‘No, non mi basterà bocca vezzosa’ draws from Ms. Invernizzi vocalism that throbs with emotion. Feo having been Gizzi’s pupil, it must be assumed that he knew his teacher’s voice intimately: he might have known Ms. Invernizzi’s just as well.

‘Volo il mio sangue a spargere,’ an aria sung by Idelberto in Nicola Porpora’s 1723 Adelaide, is dashingly delivered, every tone placed with dramatic impact and the words fizzing like sparkling wine. The pair of Ariodante’s arias from Sarro’s Ginerva principessa di Scozia, an homage to the native Britain of James Francis Edward Stuart, the deposed Prince of Wales and a prominent patron of the Arts at his Italian court-in-exile, ‘Povero amor tradito’ and ‘Cieca nave, infidi sguardi,’ are powerfully traversed. It was in a secondary rôle in Sarro’s Il Valdemaro that the fifteen-year-old Caffarelli made his professional début in 1726, alongside Gizzi’s performance of the rôle of Sveno. If Gizzi sang the aria ‘La brama di regno si unisce ad amore’ as engrossingly as Ms. Invernizzi sings it on this disc, Caffarelli cannot have failed to have been inspired by the experience.

The soprano’s beautiful sustained tones in ‘Crude Parche, deh, accrescete’ from Scarlatti’s Telemaco afford great pleasure, and she manages to make something very unique of the formulaic coloratura in ‘O a morire, o a goder.’ His participation in the creation of Leonardo Vinci’s 1726 Didone abbandonata was one of the great triumphs of Gizzi’s Roman sojourn, and Ms. Invernizzi’s fantastic coloratura in Araspe’s aria ‘Amor che nasce colla speranza’ channels the vivacity with which Gizzi must have sung the music. Here and in the aria ‘Su la pendice alpina,’ her upper register glistens, and her embellishing of the vocal lines is unfailingly intelligent. Without overextending the music, she reveals what an inventive, resourceful singer she is.

It is impossible to know how any of the revered castrati of the Seventeenth, Eighteenth, and Nineteenth Centuries sounded. Contemporary accounts of their voices are often contradictory, and many of the artistic representations of their stage presences are unflattering caricatures. A prevalent debate in the Baroque revival during the past half-century has concerned whether operatic rôles composed for castrati are more effectively cast in modern times with female or male singers. There are no sure answers for questions about the general suitability of certain types of voices for music created by castrati, but Roberta Invernizzi here makes a persuasive argument for her supremacy in performances of rôles originated by higher-voiced castrati. Her singing on Arias for Domenico Gizzi is distinguished by technical finesse and an laudable lack of attempts to affect masculinity. Like Kirsten Flagstad in the music of Wagner, Maria Callas in bel canto, and Magda Olivero in verismo, Roberta Invernizzi approaches this collection of arias sung by Domenico Gizzi with pure musicality. It is an approach that yields glorious results.