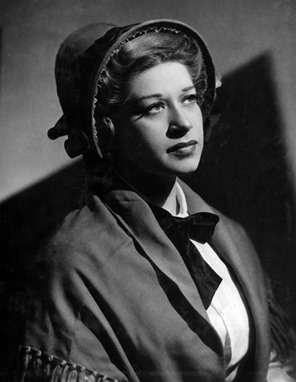 Those who remember her solely as one of America’s most celebrated mezzo-sopranos may be surprised by the fact that, when Zinka Milanov was taken ill shortly before the Metropolitan Opera’s performance of Verdi’s Il Trovatore on 6 December 1944, it was to Regina Resnik that the Company turned.  Under those auspicious circumstances, the young singer made her MET début as Leonora, and within a month she had also sung Aida and Santuzza on the MET stage.  Santuzza also introduced Ms. Resnik to the newly-established New York City Opera.  Between her 1944 début and her 1956 ‘return’ to the house as Marina in Mussorgsky’s Boris Godunov, Ms. Resnik sang some of the most demanding soprano rôles in the MET repertory: Leonore in Beethoven’s Fidelio, both Anna and Elvira in Mozart’s Don Giovanni, Rosalinde in Johann Strauss’s Die Fledermaus, Alice Ford in Verdi’s Falstaff, Wagner’s Sieglinde in Die Walküre and Gutrune in Götterdämmerung, Puccini’s Musetta in La Bohème, Cio-Cio-San in Madama Butterfly, and Tosca, and Chrysothemis in Richard Strauss’s Elektra.  In 1948, she also created the rôle of Ellen Orford in the Metropolitan Opera première of Benjamin Britten’s Peter Grimes.  During these first seasons of her career, Ms. Resnik won critical acclaim for the beauty and technical acumen of her singing, and her artistry endeared her to some of the most revered conductors of the era, including Otto Klemperer, Fritz Reiner, George Szell, and Bruno Walter.

In the summer of 1953, Ms. Resnik appeared at the Bayreuther Festspiele as Sieglinde in Die Walküre and the Third Norn in Götterdämmerung, under the batons of Joseph Keilberth and Clemens Krauss.  [She returned to Bayreuth in 1961, as a mezzo-soprano, to sing Fricka in Das Rheingold and Die Walküre, conducted by Rudolf Kempe.]  Broadcast recordings of the Krauss-led Ring survive, and the Walküre performance reveals that Ms. Resnik was one of the most accomplished Sieglindes in the opera’s history.  Her beauty of tone in Act One is arresting, as is the depth of her acting in Act Two.  Her voicing of Sieglinde’s famous ‘O hehrstes Wunder!’ in Act Three is radiant, the security of her voice in the difficult passage unsurpassed in the subsequent decades.  During her time at Bayreuth, Maestro Krauss suggested to Ms. Resnik that her true vocal territory was in the mezzo-soprano range, and taking into consideration the increasing darkness of her timbre she was inclined to agree.  After fulfilling her commitments to the MET for Rosalinde in Fledermaus and Venus in Tannhäuser—a rôle that was conceived by Wagner for soprano Wilhelmine Schröder-Devrient, who also created Elsa in Lohengrin—in the spring of 1954, Ms. Resnik put her career on hold in order to pursue a period of study with baritone Giuseppe Danise, an acclaimed teacher of the grand Italian tradition and the second husband of Brazilian soprano Bidú Sayão. 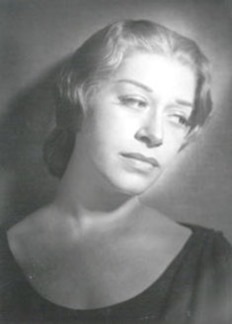 After a year of vocal realignment, Ms. Resnik returned to the MET in 1956 as a mezzo-soprano.  Following the success of her portrayal of Marina in Boris Godunov, she was acclaimed as Laura in Ponchielli’s La Gioconda and, in the opera’s widely-lauded première in 1958, as the Old Baroness in Samuel Barber’s Vanessa.  One of Ms. Resnik’s most accomplished but least-heralded assumptions was Geneviève in Debussy’s Pelléas et Mélisande, in which rôle she captured the mystery of the character.  In her tenure as one of the MET’s most celebrated mezzo-sopranos, Ms. Resnik was on stage for some of the Company’s most memorable occasions: the débuts of Gladys Kuchta and Ursula Schröder-Feinen as Chrysothemis in Elektra in 1961 and 1970, respectively; the débuts of Luigi Alva and Sir Geraint Evans in the 1964 production of Falstaff that inaugurated Franco Zeffirelli’s work at the MET; the début of the beautiful Felicia Weathers in Tchaikovsky’s Pikovaya dama in 1965; and the Gala Farewell to the Old MET in 1966.  Her final appearance in a full performance at the MET was as the Marquise de Berkenfield opposite Dame Joan Sutherland and Alfredo Kraus in Donizetti’s La fille du régiment on 14 October 1983.

Ms. Resnik sang her first Carmen for the MET in a performance for students in March 1958.  She did not return to the part until the MET tour in the summer of 1965, when she sang Bizet’s enchanting gypsy in concert performances opposite the Don Josés of Sándor Kónya and James McCracken.  In 1970, it was as Carmen that she celebrated the 25th anniversary of her début at the MET.

On a personal note, the DECCA studio recording of Carmen featuring Ms. Resnik, Mario del Monaco, Dame Joan Sutherland, and Tom Krause was the first recording of Bizet’s opera that I owned.  Sutherland was one of the singers whose work first lured me into this strange, scintillating world of opera, and I was eager to hear her performance as Micaëla despite being aware of London Green’s assessment of the recording in The Metropolitan Opera Guide to Recorded Opera as ‘a bizarre performance.’  I was duly impressed by Sutherland’s top B in Micaëla’s aria, but my imagination was immediately seized by the singing of the recording’s Carmen, who was but a name to me then.  London Green’s description of Ms. Resnik’s Carmen is worth quoting.

Regina Resnik’s Carmen is consistently fascinating, even if now and then coarsely vocalized.  In the Habanera she muses, and in the Seguidilla she manages both insouciance and maturity—one of the subtlest of modern performances.  “Non, tu ne m’aimes pas” in Act II is at the same time alienating and inviting: certainly the effect that Bizet sought.  The Card Song is restrained but freighted with baleful subtext, and the end of Act III insultingly matter-of-fact.  Her last moments are also effective.

To my untrained ears, those coarsely-vocalized nows and thens were hardly apparent and certainly not bothersome.  Most importantly, Ms. Resnik sang Carmen with a legitimately Spanish hauteur.  When, a few years later, I first heard her Sieglinde in the 1953 Bayreuth Walküre, Ms. Resnik became one of the artists whose performances I enthusiastically sought out, assured that I would find unflinching musicality and dramatic intelligence no matter which rôles she sang.

Of her MET début, New York Times critic Mark A. Schubart wrote that Regina Resnik ‘handled herself on the stage with confidence and authority.’  The same sentiment might be applied to her management of her career and her work as a teacher.  She was one of America’s most important singers and one whose legacy, like those of so many exceptional artists of previous generations, is too little known, appreciated, and respected by today’s singers and opera lovers.  Any listener who spares an hour for Ms. Resnik’s Carmen, Sieglinde, or Herodias will rejoice at the work of an imaginative, irreplaceable artist. 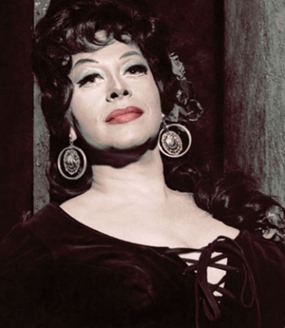