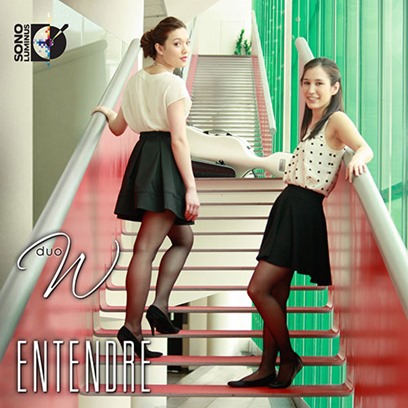 Considering that the violin and cello are staples of so many genres of Classical Music, the paucity of high-quality music for the two instruments in duet is surprising.  Aside from Baroque trio sonatas that combined violin and cello with continuo, chamber music for strings has mostly focused on larger ensembles.  As so often in music, however, an exciting new ensemble’s maiden voyage into the recording studio provides tantalizing discoveries, not just of that ensemble’s musicality but also of underappreciated music.  With Entendre, Sono Luminus introduces duoW to the commercial recording industry.  Already having enjoyed a sensation on the internet, Juilliard-educated violinist Arianna Warsaw-Fan and cellist Meta Weiss brought to Sono Luminus’s studio the boundless enthusiasm and uncompromising virtuosity that have garnered praise wherever these gifted ladies have shared their talents.  Both Ms. Warsaw-Fan and Ms. Weiss are accomplished musicians, and in ensemble their playing reaches astonishing heights of achievement.  All of the finest qualities of chamber playing—unforced coordination between the instrumentalists, genuine connection between musicians and music, and direct communication with the listener—are evident in every note on Entendre, and the obvious joy with which the ladies of duoW sweep away the cobwebs that had gathered both on the music performed on this disc and on the traditions of violin and cello duets in general creates a truly heartening listening experience.

The most familiar piece that duoW perform on Entendre is Maurice Ravel’s brilliant Sonata for Violin and Cello, published in full in 1922.  With its first movement paying homage to Claude Debussy, Ravel’s Sonata was a seminal work in the composer’s artistic development, its combination of unapologetic lyricism and melodic fecundity with the brash tonalities familiar in 20th-Century music serving as a draft for Ravel’s mature idiom.  Musically, the Sonata provided Ravel with an opportunity to both exercise his education in the traditional sonata form and explore new stylistic ground: with the first three movements—‘Allegro,’ ‘Très vif,’ and ‘Lent’—in A-minor and the final movement, marked ‘Vif, avec entrain,’ in the relative C major, Ravel pursued the kind of thematic development that would become de rigueur in his masterworks.  The alert playing of duoW reveals the inherent musical sense of even Ravel’s most stringently ‘modern’ pages, and the glowing beauty of tone brought to lyrical episodes, particularly in the ‘Lent’ movement, is superb.  The economy of Ravel’s part writing ensures that textures are spare, but there is an understated eloquence in the interplay between the instruments that recalls the chamber music and concerti for multiple instruments of Bach.  In all of the pieces on this disc, but especially in the Ravel Sonata, the way in which Ms. Warsaw-Fan and Ms. Weiss create the impression of a single musician playing both instruments is very persuasive.

At least as influential as Debussy on Ravel’s composition of his Sonata for Violin and Cello was the 1914 Duo for Violin and Cello (Opus 7) of Hungarian composer Zoltán Kodály.  Conceived in three movements, Kodály’s Duo for Violin and Cello epitomizes the composer’s style, containing in its unbending technical demands and evocations of Hungarian landscapes and traditions the foremost hallmarks of Kodály’s music.  The opening ‘Allegro serioso, non troppo’ makes formidable demands upon both players, and duoW leave no challenge unmet.  Suggestions that the Duo’s second movement, marked ‘Adagio – Andante,’ is Kodály’s deeply personal response to the growing unease that seized Europe in the months prior to the start of World War I are apt, the bleak sound world accessed by the music imparting a sense of artistic despair.  To their credit, duoW do not linger over the melancholy, never allowing their playing to become mired in sentimentality.  The Duo’s final movement—‘Maestoso e largamente, ma non troppo lento – Presto’—presents both players with music of difficulty greater than that in many solo concerti for their respective instruments.  Ms. Warsaw-Fan and Ms. Weiss distinguish themselves with assured playing of smoldering intensity, both of them seeming undaunted even by the cruelest tricks of Kodály’s music.

Norwegian violinist, conductor, and composer Johan Halvorsen turned to Händel’s G-minor Suite for Harpsichord (HWV 432) for the Passacaglia theme of his variations, originally intended for violin and viola but more commonly performed in the arrangement heard here.  It is obvious from the quality of his variations on Händel’s Passacaglia that Halvorsen was an excellent musician and an extraordinary violinist.  Halvorsen’s variations share something of the spirit of Fritz Kreisler’s ‘faux Vivaldi’ concerti, and the element of showmanship that this suggests is displayed with unaffected charm by duoW in their performance.  Halvorsen intriguingly combines musical forms of his own time with those of Händel’s, hybridizing the score and the techniques required to play it.  douW adapt to every twist of the differing styles of each variation, and a special delight of their playing is their rhythmically-accurate, perfectly-synchronized execution of trills.  So complete is duoW’s command of Halvorsen’s variations on Händel’s music that it would also be splendid to encounter their playing in a performance of authentic music of Händel.

One of the most influential cellists of the 19th Century, Adrien-François Servais composed a large variety of music for his own performance, and duoW selected for this disc the ‘Grand Duo de Concert sur deux airs nationaux anglais’ on which Servais collaborated with fellow Belgian Hubert Léonard, one of the founders of the celebrated Belgian school of violin playing.  The ‘deux airs nationaux anglais’ in question are ‘God Save the King’ and ‘London is out of Sorrow,’ which tickles American ears as ‘Yankee Doodle Dandy.’  The faculty with which Servais and Léonard maintain the basic shapes of both themes in their variations is witty, and as might be expected of music created by two legendary virtuosi for their own benefit the technical demands of the piece are almost ridiculously formidable.  duoW confront every difficulty with stunning facility but without taking the piece too seriously.  In this performance, the ‘Grand Duo de Concert’ unfolds with the high spirits of a scene from a Rossini opera, shaped by duoW with clever attention to the music’s mimicking of the recitative – aria – cabaletta structure of Italian opera.

duoW elected to close Entendre with a dazzling explosion of patriotic fervor in the form of Bruce Dukov’s arrangement of John Philip Sousa’s irrepressibly toe-tapping ‘The Stars and Stripes Forever.’  This is what might be termed an ‘encore’ number, one that gives an audience a final demonstration of the players’ technical wizardry without making great demands upon the audience’s deeper sensibilities.  Ms. Warsaw-Fan and Ms. Weiss are undoubted mistresses of this music, and their performance of ‘The Stars and Stripes Forever’ is as spine-tingling as fireworks on the Fourth of July.  The ladies of duoW play the piece with panache, and it is a fun, fitting ending to their début disc.

Entendre is as enticing an introduction to the artistry of duoW as could be imagined.  These young ladies offer playing that goes far beyond the technically-proficient instrumentalism that is heard from so many young players who emerge from the world’s conservatories today.  What is more, Entendre offers performances of marvelous music that is off the beaten paths traversed by most of the world’s better violinists and cellists.  Ms. Warsaw-Fan’s and Ms. Weiss’s playing in this performance is not of the coolly exhibitionist nature of important artists in the concert hall, and Entendre is all the more enjoyable for it: rather, this is music-making of the sort that occurs when two fabulous artists for whom playing is a true joy meet and play merely for their own pleasure.  Many début discs raise the question of what comes next for the artists at hand, but Entendre leaves no doubt that the young ladies of duoW are poised to significantly influence the dialogue between violin and cello in the 21st Century.  Thanks to Sono Luminus, those who love these instruments have this opportunity to witness a vital step in the artistic genesis of what is sure to remain one of contemporary Classical Music’s greatest partnerships.