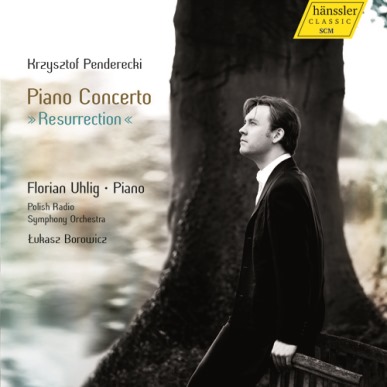 The musical career of Krzysztof Penderecki, who celebrates his eightieth birthday in 2013, has spanned an extraordinarily wide spectrum of musical innovations, the composer’s youthful adherence to the avant garde principals of composition explored by his contemporaries giving way to a later return to traditional forms and tonal systems that persists in his work since the start of the new millennium.  The shifting guises of Penderecki’s work can perhaps be interpreted as a reflection of the deeply personal response of the artist to the political and social trials endured by his native Poland, which during the composer’s lifetime has endured the monumental destruction of World War II and the brutality of Communist rule.  The indomitable spirit of the Polish people has ushered in a new era of individual and creative freedom, however, and Poland in 2013 is one of the most culturally vibrant, invigorated nations in the world.  Ironically, it was an assault on the concepts of freedom and democracy that prompted the creation of Penderecki’s Piano Concerto, entitled ‘Resurrection’ by its composer in an obvious expression of kinship with Mahler’s Second Symphony.  Commissioned by New York’s Carnegie Hall, the piece is dedicated to the victims of the 9-11 terrorist attacks.  What is offered on this recording by German pianist Florian Uhlig and Maestro Łukasz Borowicz is not the Concerto as it was heard at its 2002 première at Carnegie Hall but Penderecki’s revised version of the score, first performed in Cincinnati in 2007.  Its dedication notwithstanding, Penderecki’s Piano Concerto is an appropriate, brilliant homage to his homeland and resilient countrymen and to his own chameleonic versatility as an artist.

Like many of Penderecki’s works, the Piano Concerto initially proved controversial, some critics even suggesting that the broadly unsentimental nature of the music was an affront to artistic sensibilities affected by the tragedy of the 9-11 terrorist attacks.  Having dedicated works to the victims of the bombing of Hiroshima, those killed in 1970 riots in Poland, and—via revisions to his Polish Requiem—Pope John Paul II, Penderecki has allied his creative process throughout his career with an insightful understanding of history and global politics.  Putting politics aside and merely listening to the music, it is difficult to comprehend the Concerto being regarded as anything other than an exceptional piece of music, a gift to pianists that honors the tradition of the great 19th-Century concerti of Schumann, Brahms, and Tchaikovsky but is also very much of the 21st Century.  Penderecki’s score contains a great deal of very fine music, his idiom having evolved into an appealing and consistently accessible modernism.  Perhaps it is this accessibility that draws the ire of some critics, whose prerogative is seemingly to condemn any music that seeks to move beyond the Serialism and bleak atonalism of mid-20th-Century compositional techniques.  The sting of the tragedy of 9-11, the horror of that day that broke hearts in every corner of the world, is that those who died in the World Trade Center, the Pentagon, and in a field in rural Pennsylvania were ordinary people: stock brokers, firefighters, police officers, secretaries; and, more importantly, mothers and fathers, sisters and brothers, daughters and sons, friends—people simply pursuing their everyday lives.  How can a composer’s decision to memorialize these people with sounds that would almost certainly have pleased them more than the cold sounds of the 20th Century avant garde possibly disrespect or pervert the goal of honoring them?  Penderecki undoubtedly felt that these innocents deserved the best of his art, and in his Piano Concerto he gave it to them.

Musically, Penderecki’s assignment of the epithet ‘Resurrection’ and the association with Mahler are apt.  The spirit of Mahler’s ‘Resurrection’ Symphony hovers over the Concerto, not least in the brass fanfares and alternations of hushed, almost trance-like passages with explosions of the orchestra’s full power.  Through-composed, the Concerto indeed often mimics the formal structure of Mahler’s Symphonies and Das Lied von der Erde, its frequent changes of tempo producing an episodic progress that transcends the traditional employment of individual movements.  Still in evidence is the bold use of percussion that characterizes much of Penderecki’s work, though in the Piano Concerto there are none of the typewriters, musical saws, and other mechanical implements that populated the composer’s earlier scores.  Penderecki’s writing for the orchestra recalls both Mahler and Schoenberg but is also individualistic.  Passages that employ strident sonorities never do so merely for the sake of modernity per se, but the effectiveness of the contrasting of these passages with outpourings of lyricism is dazzling.  Fortunately, the spacious, atmospheric sound achieved by hänssler CLASSIC’s engineers faithfully captures the full extent of orchestral outbursts without jeopardizing intimate details, and the balance between orchestra and piano is refreshingly natural, recreating the experience of hearing a work of this nature from an ideal distance in the concert hall.

The gifted players of the Polish Radio Symphony Orchestra are given music that demands their complete concentration, and the excellence of their playing under the baton of their Artistic Director, Łukasz Borowicz, never falters.  Having presided over exciting, idiomatic performances of an array of works, Maestro Borowicz has seemingly also mastered the music of Penderecki.  Conducting with an affinity for the idiosyncrasies of the composer’s music and completely resisting any temptation to approach the Piano Concerto, especially in its most grandiose pages, as a parody or replica of Mahler’s music, Maestro Borowicz adopts tempi that have the distinction of unfailingly sounding right for the music.  He and the Orchestra support the pianist with the subtlety and synchronicity of chamber musicians, maintaining precision of ensemble in even the most musically convoluted passages.  Playing of virtuosic mastery of the music is evident in every section of the Orchestra, and Maestro Borowicz’s conducting is as much in the music of Penderecki as in that of Mozart or Verdi a source of imperturbable strength and grace.

The career of Düsseldorf-born pianist Florian Uhlig has been so rewardingly unconventional that it is perhaps no surprise that he should prove an intelligent interpreter of Penderecki’s Piano Concerto.  In terms of basic pianism, Penderecki’s Concerto evokes memories of a number of composers’ styles of composition, with notable echoes of the large-scale scores of Gershwin, Grieg, and Rachmaninoff.  With its use of emphatic chord figurations in thematic development, the Concerto also discloses the influence of Tchaikovsky’s First Piano Concerto.  Mr. Uhlig’s playing is unmistakably attuned to both the overall structure of Penderecki’s Concerto and the nuances of each episode.  His seamless transitions among tempi combine with a powerful but unexaggerated range of dynamics to meaningfully explore the inner voices of Penderecki’s music, exposing the undercurrents of sorrow and regret that tinge the solo line even when the orchestral accompaniment is at its most exuberant.  Mr. Uhlig’s playing is shaped by finely-judged rhythmic vitality, his delivery of rapid passages accurate but never mechanical.  In the most overtly lyrical moments, Mr. Uhlig’s gossamer touch and use of pedals produce an alluringly ‘vocal’ tone.  Throughout this performance, Mr. Uhlig’s playing reveals the sort of innate musicality that cannot be taught by even the most remarkable teacher.

Virtually every major work of art has to its credit some particular social or political history.  One of the greatest joys of art—and one of the qualities that sets it apart from other aspects of human existence—is the capacity of a concerto, a painting, or a poem to transcend the circumstances of its creation.  The renaissance of global recognition of the universality of loss and humanity’s boundless capacities for compassion and communication were results of the 9-11 attacks that no terrorist could have foreseen.  It is regrettable that similar recognition of the heartfelt memorial to those who fell on that day by one of the world’s foremost composers should have been muddied by the hateful business of politics and critical corruption.  With or without its context of pain and survival, Penderecki’s Piano Concerto is a work that bristles with creativity, beauty, and open-hearted sincerity.  With this performance, Florian Uhlig, the Polish Radio Symphony Orchestra, Łukasz Borowicz, and hänssler CLASSIC give Penderecki’s Concerto its much-deserved Resurrection.