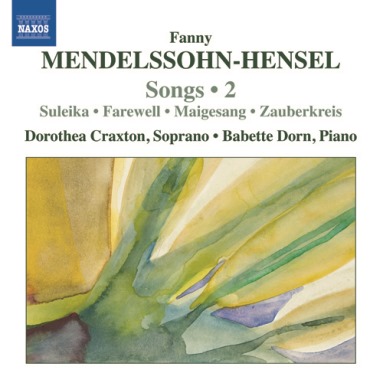 Despite the best efforts of esteemed performers and enterprising record labels, the music of Fanny Mendelssohn-Hensel remains too little explored by today’s artists, especially Lieder singers.  Unlike many female composers, Mendelssohn-Hensel was surrounded by family who encouraged her compositional ambitions if not her aspirations to see her music in print: she not only received the same musical education that was lavished on her famous brother Felix but was for a time considered the superior pupil.  Her work as a composer had the support of her husband, painter Wilhelm Hensel, something that as gifted an artist as Alma Mahler lacked, and though it may seem to have perpetuated the latent sexism in the Arts environment of the Nineteenth Century, her brother’s publication of a number of her songs under his own name is indicative of his ambivalent appreciation of his sister’s talent.  There is a story, perhaps apocryphal, which suggests that Mendelssohn embarrassedly confessed to Queen Victoria when she cited ‘Italien,’ published in his Opus 8 collection of Lieder, as her favorite song that it was, in fact, the work of his sister.  After her marriage, some of Mendelssohn-Hensel’s works were published, but few records of contemporary critical response survive.  Re-evaluation of her music in the Twentieth and Twenty-First Centuries, spurred by the increasing interest in the music of female composers, reveals that Mendelssohn-Hensel was capable of creating works of great charm, beauty, and unabashed sentimentality.

When selecting texts for her Lieder, Mendelssohn-Hensel displayed considerable insightfulness.  Included in this recital, the second Volume in NAXOS’s ongoing devoir to Mendelssohn-Hensel’s Lieder, are songs set to verses by, among others, Robert Burns, Lord Byron, Johann Wolfgang von Goethe, Heinrich Heine, and Friedrich Rückert.  The gracefulness with which Mendelssohn-Hensel set words to music is evident in all of the songs on this disc.  Though her melodies are not as memorable as Schubert’s, she shares many of the Austrian composer’s gifts for conveying the emotional essence of a poem by combining eloquent vocal lines with direct, unadorned accompaniments.  Mendelssohn-Hensel was an accomplished pianist, though her talents were mostly confined to her family’s salons: what is believed to have been her only public performance was of her brother’s First Piano Concerto.  Her own talents for the keyboard undoubtedly contributed to the skillfulness of her writing of the piano accompaniments to her Lieder.  The music to which Mendelssohn-Hensel set the songs performed on this disc is of unfailingly excellent quality.  There are the expected echoes of her brother’s style but also discernible influences of Schubert, Beethoven, Mozart, and even Bach and Händel.  The Mendelssohn family were exceptionally important in the revival of interest in Baroque music, after all, and bravura passages and trills that one might expect to hear in the Passions of Bach or German arias of Händel are put to sparingly effective use by Mendelssohn-Hensel in a pair of songs recorded here.  One peril of projects that aim at recording all of a lesser-known composer’s Lieder is that such attention often discloses pieces that merit the obscurity the decades have granted them.  There are no such disappointments among the songs on this disc.

Pianist Babette Dorn is a sensitive accompanist who encounters nothing in Mendelssohn-Hensel’s music that she is not eminently capable of executing with poise and superb musicality.  Ms. Dorn’s playing honors the composer by being so consistently attuned to the subtlety and almost imperceptible shifts in moods.  Furthermore, Ms. Dorn displays a true affinity for matching her own phrasing to that of the singer she is accompanying, as well as for setting the pace of each song without imposing tempi on the singer or exploiting the music in the interest of displaying her talents.

In addition to having sung the Lieder included in NAXOS’s first Volume of Mendelssohn-Hensel’s Lieder, German soprano Dorothea Craxton has also recorded Lieder by Clara Schumann and an impressive catalogue of Baroque repertory, all of which ideally prepared her for performing the Lieder included on this disc.  Ms. Craxton’s voice has a lovely, alluringly feminine timbre that shines in this music.  Mendelssohn-Hensel’s vocal demands are not slight, with several of the songs taking the singer near to the top of the lyric soprano range, and Ms. Craxton responds with secure intonation and laudable placement of the voice.  Ms. Craxton explores the emotional depths of the Goethe and Heine songs with intelligence, conveying darker sentiments without clouding her sound or distorting the purity of her phrasing.  Mendelssohn-Hensel’s setting of Justinus Kerner’s ‘Totenklage’ (‘Lament for the Dead’) draws from Ms. Craxton great focus of feeling.  The Byron settings are suitably warm-blooded pieces, and Ms. Craxton sings them delightfully.  ‘Fichtenbaum und Palme,’ its text by Heine, is one of Mendelssohn-Hensel’s best songs, and Ms. Craxton delivers it with emotional honesty and radiant tone.  Throughout the performance, Ms. Craxton sings winningly.  The only flaw in Ms. Craxton’s performance is her diction: clear enough in German texts, her enunciation of the English texts is virtually unintelligible, detracting from her accomplishment in the performance of the Byron songs.  This is a recital that is easily enjoyed nonetheless; and, furthermore, one that is a finer performance than several recent recital discs featuring very famous singers.

With so many fine Lieder singers sharing their artistry in the world’s concert halls today, it is regrettable that so few of them look beyond the boundaries of the standard Lieder repertory to the songs of underappreciated composers such as Fanny Mendelssohn-Hensel.  As so often in recent years, a NAXOS project fills a gap in the repertory most handsomely.  Dorothea Craxton and Babette Dorn give of their best in this recital of Mendelsson-Hensel Lieder that, more than many ‘unearthed’ works, deserve to be heard.