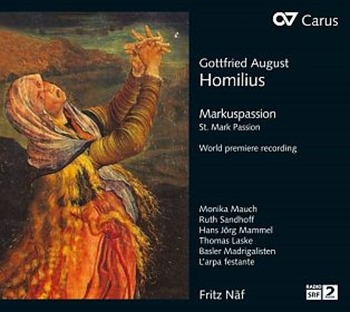 Virtually every music lover has experienced a few moments of indecision when, hearing a piece of music, there are feelings of both familiarity and ignorance; that sense of musical déjà vu inspired by an instinct for recognizing a specific piece or its style and an inability to precisely identify the score or its composer.  The music of Gottfried August Homilius, a crossroads at which styles past and future intersect, might well account for some of these moments of musical confusion.  Indeed, there are moments in his Markuspassion when Homilius—an almost exact contemporary of Gluck—has one foot firmly in the Baroque traditions of Bach and Händel and the other stretching into the mature Classicism of Haydn and Mozart.  Markuspassion is far more than a curiosity or stylistic hybrid, however: in a score of roughly the same duration as Bach’s Johannes-Passion, Homilius makes his own unique compositional voice apparent.

A native Saxon like both Bach and Händel, Homilius may have been a pupil of the former at Leipzig: it is known that the younger composer moved in circles populated by Bach’s students, but evidence supporting the suggestion that Homilius personally studied with Bach is largely anecdotal, based upon the recollections of the composer Johann Adam Hiller, who became Cantor of Thomaskirche in 1789, nearly forty years after Bach’s death.  Active for virtually his entire professional life as first an organist and later Cantor in Dresden, Homilius enjoyed access to a rich Lutheran liturgical tradition that drew upon the work of Buxtehude, Pachelbel, Telemann, and Bach, as well as proximity to one of the most musically progressive Courts in 18th-Century Europe.  In fact, the Markuspassion was dedicated by Homilius to Princess Anna Amalia, the influential sister of the music-loving Frederick the Great, perhaps in recognition of her patronage of an early performance of the work.  Historical details of personal, professional, and educational associations notwithstanding, Homilius’s skill and integrity as a composer are obvious in Markuspassion.

The Stuttgart-based Carus label has devoted a number of releases in its ‘Music from Dresden’ line to music by Homilius, and this confidence in the quality of the music of a composer little known to many listeners is opulently rewarded in this recording of Markuspassion.  Twenty voices strong for this performance, the choristers—and occasional soloists—of Basler Madrigalisten impress in every choral episode.  Blending beautifully in the chorales, they also prove thrilling in their full-throated singing of the turba-like choruses that are so reminiscent of the Passions of Bach.  The opening chorale, ‘So gehst du nun, mein Jesu,’ is cut from the same fabric as the opening movements of both Bach’s Johannes-Passion and his Matthäus-Passion, and the choristers sing it with appropriate anguish but beautiful tone.  Equally impressive are instances in which tenors from the choir combine in a smaller ensemble to portray Christ’s Apostles, a lovely effect.  The choristers and soloists receive expert support from the twenty-seven players of L’arpa festante.  As in Bach’s Passions, Homilius’s music requires several of the instrumentalists to contribute solo obbligati, all of which are played with finesse and attention to detail derived from the relevant texts.  Fritz Näf, founder of Basler Madrigalisten, conducts sensitively, taking cues on tempi from the dramatic situations.  Perhaps most importantly, Maestro Näf gives the performance space in which to develop naturally, allowing Homilius’s music to work its magic without conductorial interference or forced climaxes.

Soprano Monika Mauch brings a bright, slightly metallic voice to Homilius’s strenuous music for the soprano soloist.  The soprano’s first aria, ‘Mensch, empfinde doch Erbarmen,’ belongs to the world of Bach’s Passions, its hint of the future coming with an unexpected cadenza, an opportunity to display her upper register of which Ms. Mauch takes full advantage.  One of the most compelling sequences in Markuspassion is the series of alternating Accompagnati and arias for the soprano in the Second Part, a reaction to the actual Crucifixion that takes on the intense character of the title character’s famous mad scene in Händel’s Orlando.  Ms. Mauch brings both precision and power to this sequence, ideally conveying the heartbreak of the text through her pointed singing.  Ms. Mauch sings her final aria, ‘Ihr Tränen fließt,’ a paean to Christ’s death and expected salvation in the vein of Händel’s ‘I know that my Redeemer liveth,’ with appealingly pure tone, the words carried convincingly on the breath.

The first aria for the alto soloist, ‘Wenn euch eure Sünden drücken,’ with its lilting horns, would not seem out of place in a score by Haydn, Salieri, or the young Mozart, and alto Ruth Sandhoff sings it with assured technique that makes easy going of the divisions.  The alto’s second aria, ‘Verkennt ihn nicht, den Gott der Götter,’ conjures memories of Händel’s Rodelinda with its musical depictions of exasperation and righteous definace, and Ms. Sandhoff meets the demands of the music excitingly.  Throughout her performance, Ms. Sandhoff deploys her compact voice with strength and intelligence.

Tenor Hans Jörg Mammel sings the Evangelist and the tenor arias, placing the voice ideally for the varying requirements of his music.  Singing the text of the Gospel, Mr. Mammel communicates with the listener through deeply expressive singing, shaping lines with liquid phrasing and a wide palette of vocal colors.  Mr. Mammel sounds untroubled by the punishing tessitura of the Evangelist’s music, projecting ably at both extremities of his range.  An accomplished veteran of historically-informed performances, Mr. Mammel is gifted with a seemingly unerring instinct for pacing his singing according to the demands of both music and text.  In the two arias for the tenor soloist, Mr. Mammel sings with imperturbable technique and refinement.

As in Bach’s Passions, the casting of the role of Christ is crucial to the success of Homilius’s Markuspassion.  Baritone Thomas Laske proves a worthy interpreter and a very talented singer, singing straightforwardly but with great dedication.  Homilius’s score includes a very eloquent setting of Christ’s inaugural celebration of the Eucharist, expressed through poignant arioso: Mr. Laske, firm of voice in every bar he sings, delivers this scene with quiet dignity.  Mr. Laske never artificially darkens or inflates his tone, with the result that his Christ is audibly a young man fulfilling fateful prophecies in the prime of his life.  As soloist, Mr. Laske movingly sings two of the most beautiful arias in the score.

It cannot be argued that Homilius’s Markuspassion is as significant a work as Bach’s Johannes-Passion or Matthäus-Passion, but it is a work of fervor, emotional honesty, and legitimate originality that deserves to be studied, performed, and enjoyed.  Despite possessing impeccable musical credentials, Gottfried August Homilius has the misfortune of being a member of the largely forgotten generation of composers whose careers coincided with the transition from the Late Baroque of Bach, Händel, and Vivaldi to the Viennese Classicism of Haydn and Mozart.  Homilius’s Markuspassion is an important work of that transitional period, its structure honoring Baroque traditions and its music often anticipating later works.  Having engaged a first-rate cast of soloists, choristers, and instrumentalists under the direction of a conductor whose affection for the music extends to trusting its impact, Carus have produced an account of Homilius’s Markuspassion that resoundingly validates the esteem in which the score and its composer were held in 18th-Century Dresden.